THE Morphy Richards MixStar has reimagined what stand mixers should look like with a design that closely resembles a food processor.

But is it as powerful as traditional stand mixers? We put it to the test in a home kitchen to find out. 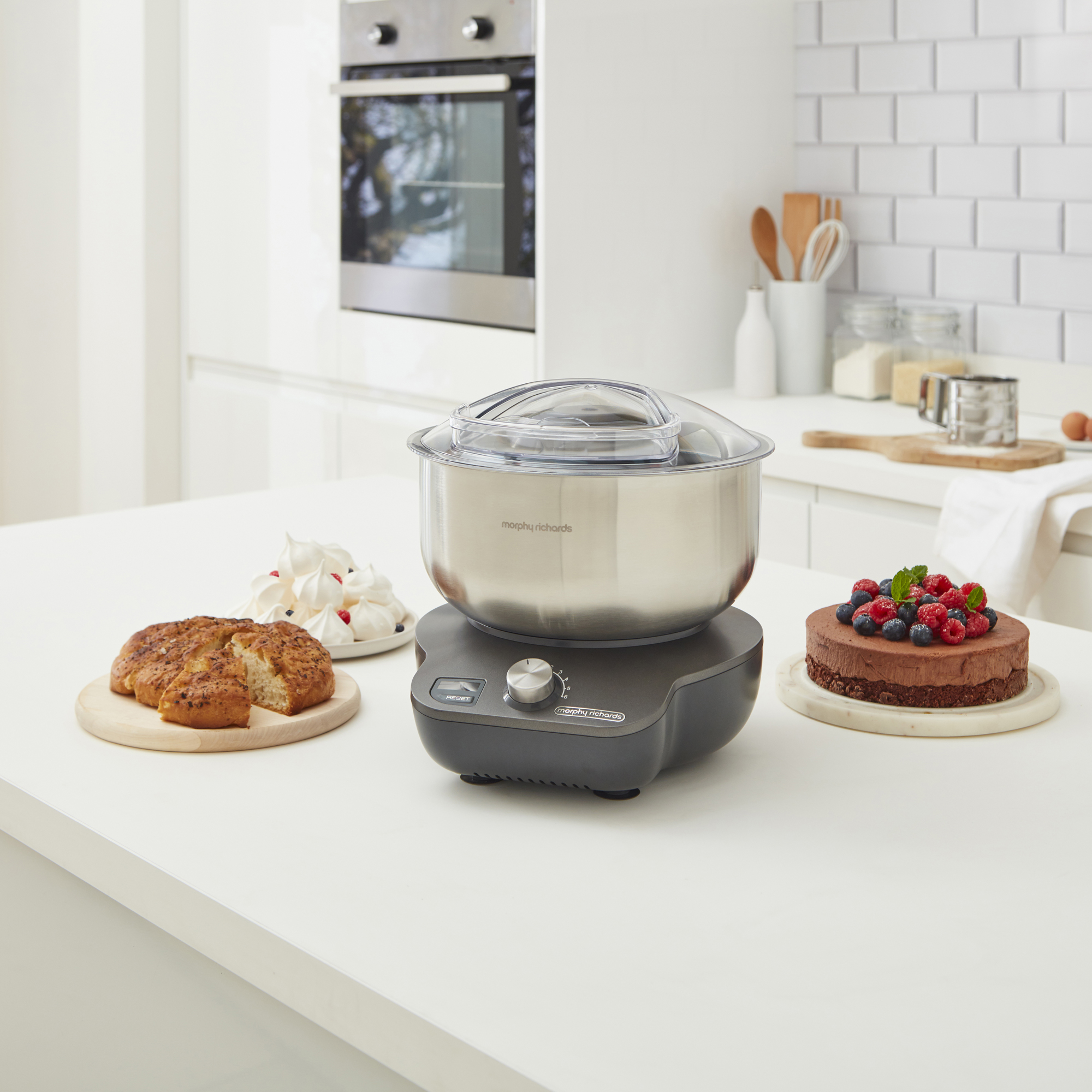 Morphy Richards MixStar compact stand mixer: what accessories does it come with?

The Morphy Richards MixStar’s design is simple – a 650W machine forms the base with the 4l mixing bowl plus lid docking into place on top.

Instead of an attachment arm over the top like other stand mixers, the Mixstar has a drive shaft inside the mixing bowl that you secure the attachments to, as you would on a food processor.

The design of the attachments is also unique.

For the whisking and mixing functions, you have a “twin assembly spindle” that you attach a pair of whisks or beaters to instead of just one.

There’s also a bowl scraper attachment you use at the same time that stops you from having to pause the machine to scrape down the sides.

The dough hooks also come in a pair, although they’re pre-assembled.

The whole thing is extremely lightweight, coming in at just 4.7kg.

Morphy Richards MixStar compact stand mixer: is it easy to use?

The Morphy Richards MixStar’s unusual design means it can be a bit confusing to assemble at first. But once you get the hang of it, it’s really easy.

The mixing bowl just sits on top of the machine and there’s no need to lock into place – although you do need to jiggle it a bit to make sure it's docked properly.

On the front of the base, there’s a dial to toggle speeds of up to six while a timer shows you how long the machine has been running.

The dough hook is all in one piece and just slots into place on the drive shaft in the bowl with a clockwise twist.

The whisks and beaters have to be attached to a spindle – you just push these in with a click – which then goes onto the drive shaft in the same way as the dough hook.

There’s also a removable bowl scraper, which scrapes down the drive shaft and the edge of the bowl for you when in use, that you can attach to the spindle when using the whisks or beaters.

Once you’re done, everything fits neatly back into the storage caddy that’s designed to sit in the mixing bowl, making storage a breeze.

The one thing we found was that it was super easy to add ingredients as there was no attachment arm getting in the way.

However, because of the drive shaft in the bowl, getting the ingredients out can be a bit messy, especially for anything wet and sticky like batters or egg whites.

The Morphy Richards MixStar’s dough hook has two metal prongs, plus a detachable plastic scraper in the middle to scrape down the drive shaft, so in theory, you should just be able to set the machine to go and leave all the mixing to it.

We found that it was best with hard doughs, though.

When we tried a pasta dough recipe, the machine managed to incorporate all the ingredients together really quickly.

But because the dough was quite soft and sticky at first, at the kneading stage it just stuck to the bottom of the mixing bowl and refused to form a ball. We had to add more flour and scrape it down several times to get it to combine.

All the while, the machine’s timer was ticking towards the 10 minute limit – after that you’re supposed to let it rest for 20 minutes – and we really felt it was struggling towards the end.

When the pasta dough was drier though, the machine did manage to knead it quite well. 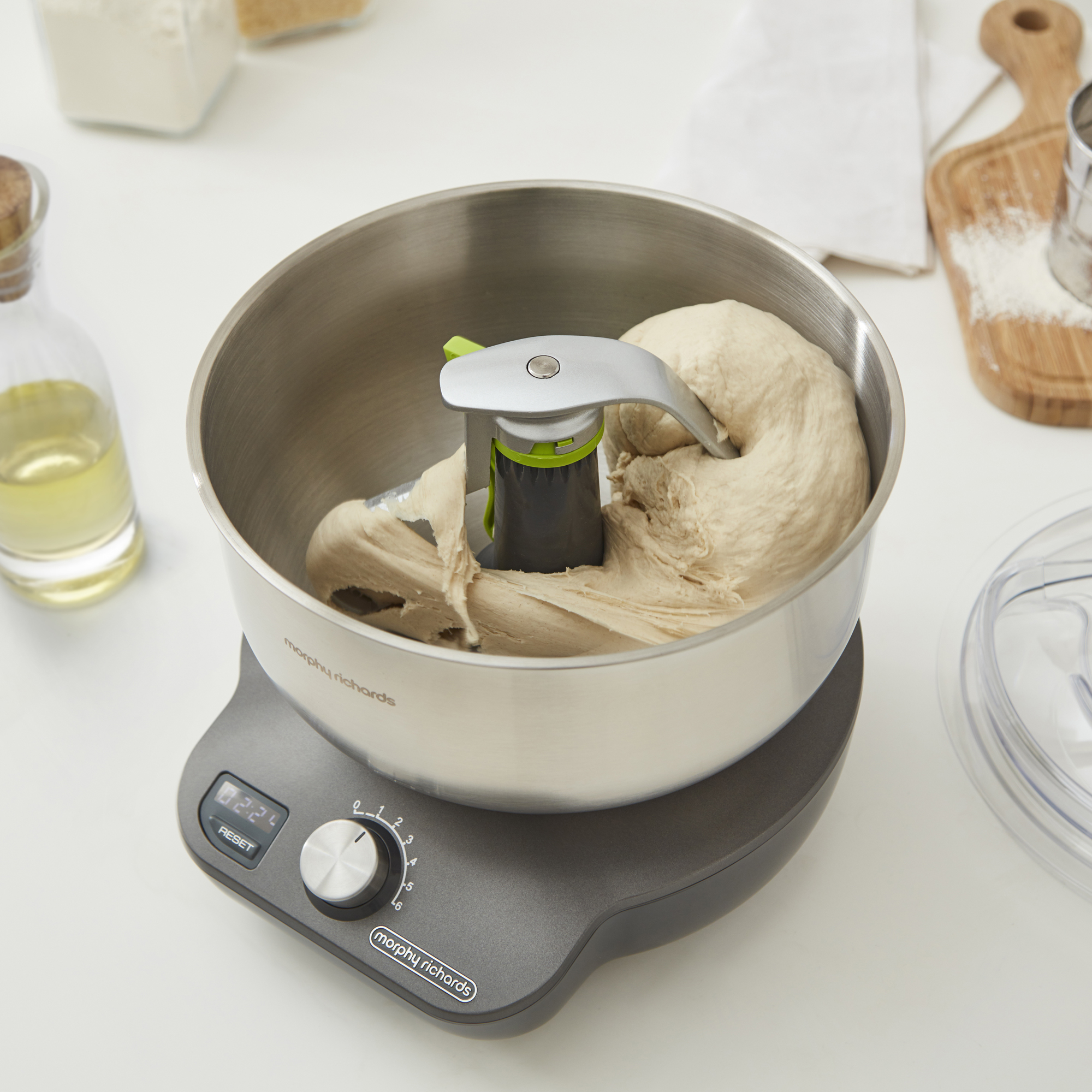 The Morphy Richards MixStar’s double whisk function made whipping up a batch of egg whites for meringues super easy and fast.

We took off the bowl scraper for this – it’s made from silicone, which can hold on to oil and stop egg whites from whisking up – so it was just the whisks doing the job.

Within three minutes the machine turned out silky, soft peaks from eight egg whites and a minute or so more for stiff peaks.

We were also impressed with the spacious mixing bowl.

We expected there might be some splash back when the machine was at its highest speed but found we could actually run it without the lid to add more ingredients – although there’s a pour spout to make that easy too.

We tried a crumpet recipe on the Morphy Richards MixStar’s beater attachment with the bowl scrapers attached.

It’s quite a clingy batter, and the machine managed to knock out the pockets of flour in no time.

The bowl scrapers also did a great job of scraping down the sides of the bowl and around the drive shaft to make sure everything was mixed in.

However, we did find some lumps attached to the beaters themselves – the matte-feel plastic material meant they didn’t release on their own, unlike stand mixers that came with metal attachments. It’s an easy fix though. 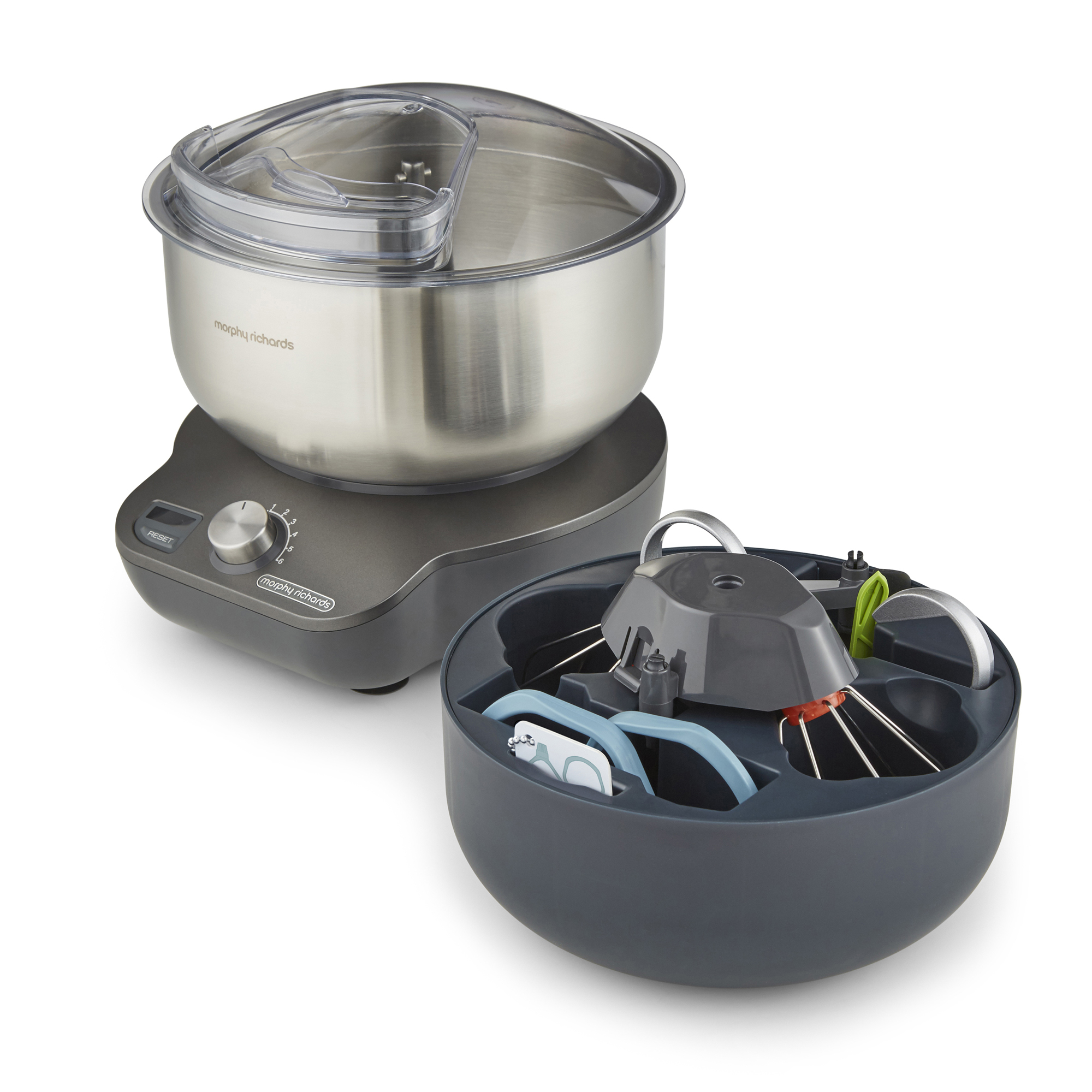 Morphy Richards MixStar compact stand mixer: what else can it do?

Unlike some of the other stand mixers we tested, the Morphy Richards MixStar can’t be expanded with additional accessories.

The Morphy Richards Mixstar was surprisingly powerful and we felt it was comparable to some of the traditional stand mixers on the market for most tasks, but at a fraction of the price.

However, the powerful motor was much more noisy and we definitely wouldn’t recommend using it late at night.

It’s also worth bearing in mind that 10-minute limit. The machine will power through most tasks well within that time frame but if you’re cooking a few things at the same time, that might be an issue.

If you’re looking for a stand mixer, why not check out some of our other reviews?

We tested the KitchenAid Artisan 5KSM175PS 4.8l stand mixer to see whether it’s worth the extra money.

For a slightly cheaper alternative, the Cuisinart Precision SM50BU 5.2l stand mixer does a great job.