Heartwarming moment mother tells her son, 10, he’s leaving ‘horrible’ school where he suffered ‘bullying and racism’ to start at a new one with his best friends

A mother has surprised her son by removing him from a school where he was bullied and his excitement has made social media users cry.

Taking to TikTok, Sara Louise, 37, who goes by the username @curvyloulou, from Worthing, West Sussex, shared the clip of her son George, 10, in the front seat of a car.

She gave him a bag to open and he eagerly started removing uniform items like new black shorts and white shirts.

But it was when he spotted a new school jumper that the penny dropped for George, who immediately broke into a smile as he exclaimed: ‘No way’.

He then opened a book about his new school, which friends from his football team attend.

Users were quick to praise Sara Louise for listening to her child and one added the video had ‘triggered so many emotions’ as people flocked to wish George luck on his new start. 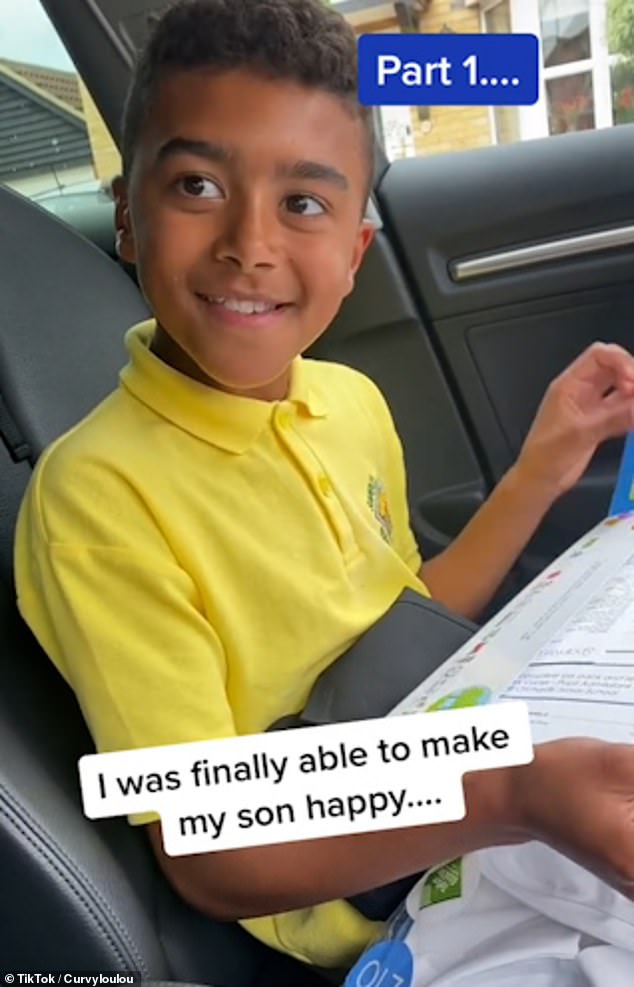 She captioned the video: ‘After a year of bullying, racist abuse and being so unhappy at school.. I was finally able to make my son happy.’

In the video, Sara Louise said: ‘So you know you’re really unhappy with your school. Guess what? You start Tuesday. Tomorrow’s your last day.’

Visibly excited by the news, George could not stop smiling and repeatedly laughed, and said ‘No it’s not’, as he was told he didn’t need to go back to his current school after Friday.

His mother told him he’d be starting on a Tuesday because the following Monday was a Bank Holiday, adding: ‘Tomorrow is your last day at this horrible school. 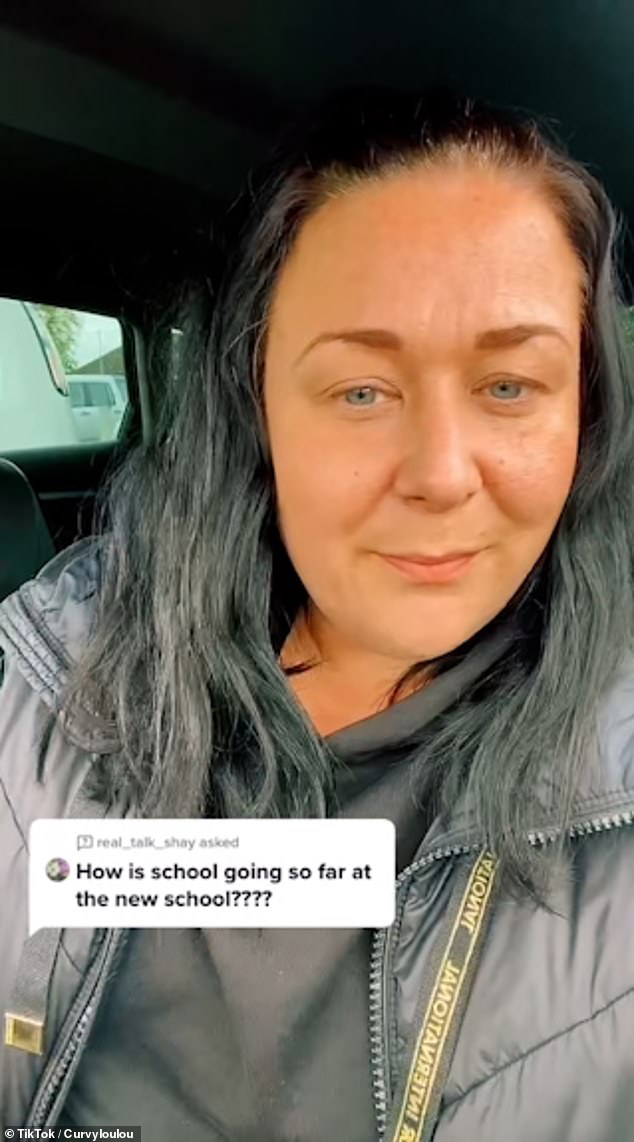 Taking to TikTok, Sara Louise, 37, who goes by the username @curvyloulou, from Worthing, West Sussex, shared the clip of her revealing the news to her child 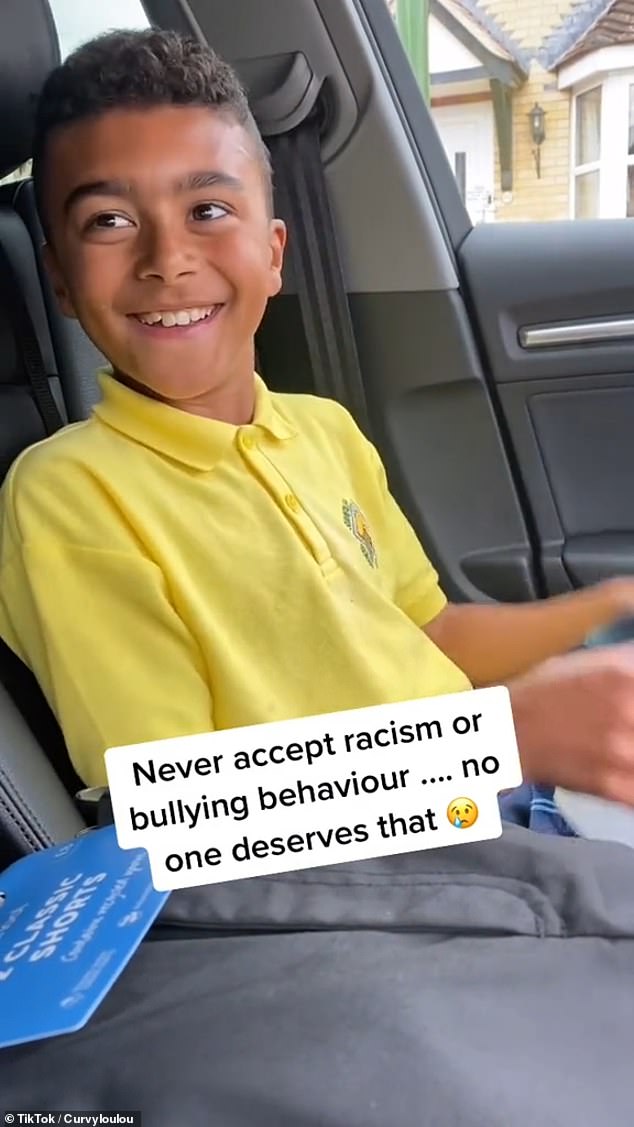 Visibly excited by the news, George cannot stop smiling as his mother tells him Friday is his last day at his old school

Users appeared to be upset but moved by the clip, as one said it had ‘triggered so many emotions’ as people flocked to wish George luck on his new start

‘No more bullying, no more racism. You are going to the school with your best friends and everything.’

In the second part of the clip, she explained: ‘It’s the first time in a long time he has smiled and laughed.’

George appeared in great spirits at the prospect of his new school, and seemed overjoyed about his new PE kit, water bottle and tie.

The pair joked about his new smart uniform at the fact he’d have to wear a shirt and tie.

Sara Louise then asked how he felt about moving, and George simply replied: ‘Amazing’ as he beamed for the camera. 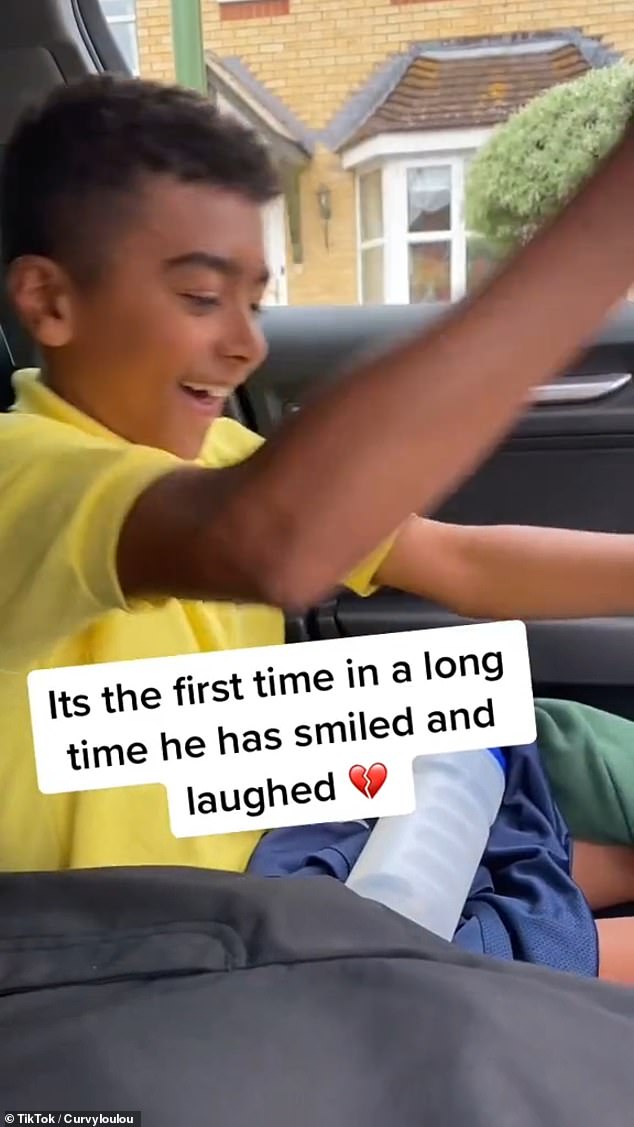 She wrote: ‘Never accept racism or bullying behaviour… no one deserves that’.

In a more recent clip, the mother-of-one explained George was loving his new school  and is ‘really happy’.

She said that she wishes she’d ‘done it sooner’ and added: ‘If you’re children aren’t happy, listen to them, and do something about it. It’s really important.’

People have also been quick to praise the mother’s actions, and think she made the right decision by removing her son. 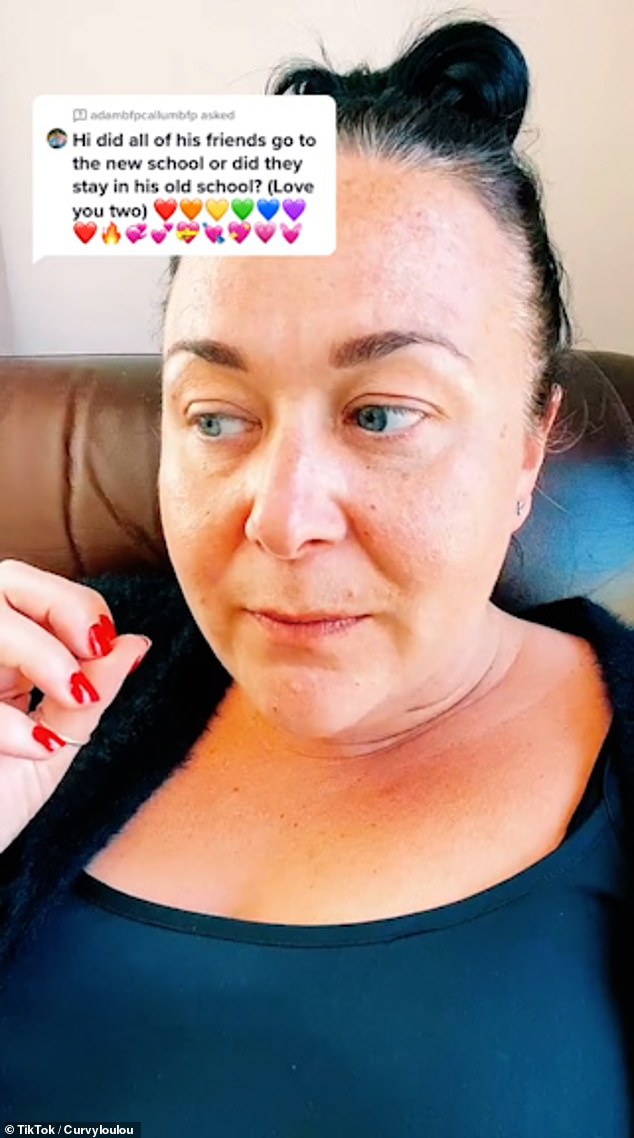 People have also been quick to praise the mother’s actions, and think she made the right decision by removing her son

One wrote: ‘Parents who actually listen to their kids are amazing’, and another wrote: ‘Now that is a great parent.’

Many others were left heartbroken by the story, and some even said the video made them cry.

One user said: ‘This made me tear up. He didn’t deserve to go through that. No one does. Wish him all the happiness at his new school’.

Another penned: ‘This made me sob like a baby, what a truly lovely lad and amazing mum.’