A multibillion-dollar fund that splashed cash on commuter car parks and road intersections was not administered appropriately, with a scathing audit finding the federal government shut down a plan to award the money on merit.

Instead, the Australian National Audit Office found the $4.8 billion federal Urban Congestion Fund program was used at the government’s discretion to fund projects mainly in Liberal-held or marginal seats at the 2019 election. 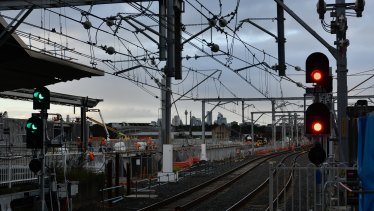 Just two of the 47 commuter car parks meant to be built at rail stations have been completed.Credit:Dean Sewell

It’s the second damning report on programs used to fund projects at the election, with the first one into sports grant funding leading to then-Sports Minister Bridge McKenzie having to resign from cabinet over the sports rorts affair.

The audit described the way the federal Infrastructure Department managed the program as “inappropriate” and deliberately opaque.

“The department’s approach to identifying and selecting commuter car park projects for funding commitment was not appropriate,” the auditor found. “It was not designed to be open or transparent.”

“Departmental advice did not contain an assessment against the investment principles or policy objectives and it was not demonstrated that projects were selected on merit.”

The funding for commuter car parks, road pinch points and intersections across the country was promised ahead of the 2019 election, sparking pork-barrelling concerns. Just two of the commuter car parks have been completed.

Shadow urban infrastructure spokesman Andrew Giles wrote to the national auditor in February last year and successfully requested an investigation, with the report being released on Monday.

The watchdog found the federal Infrastructure Department failed to use data and research when deciding where to distribute the taxpayer funds and did not consult with state governments and councils about where the money was needed.

The department also shut down a proposal by the federal Treasury to run a competitive, merit-based program to distribute the funds where it was most needed in 2018.

The department – which at the time was reporting to minister Paul Fletcher and then Alan Tudge in the lead-up to the election – decided instead there would be no formal call for submissions and projects would be identified and selected by the government.

The lack of a cohesive plan allowed federal MPs to put forward their preferred projects and the distribution of funding “reflected the geographic and political profile of those given the opportunity by the government to identify candidates for funding consideration”.

The cash was ultimately designated to largely directed to Coalition-held federal seats. Of the 23 federal seats that were selected for the projects, 15 were held by the Coalition and eight by Labor.

The funding was overwhelmingly allocated to Victoria – 38 per cent – followed by NSW which received 16 per cent. The most successful electorates were Goldstein (six projects), Deakin (five projects), Kooyong (four projects) and Banks (four projects), all of which were Coalition-held.

The cash was not directed to the areas that were most in need, the auditor found.

The majority of funding in Melbourne was directed to roads in the south-east, despite infrastructure experts warning Melbourne’s north-western roads being more congested and in greater need of upgrades.

“Melbourne took more than 2.5 times the number of projects located in Sydney notwithstanding that Infrastructure Australia has identified that the majority of the most congested roads in Australia are located in Sydney,” the auditor found.

The Infrastructure Department also failed to engage with state governments and councils, “which increased the risk that selected projects would not deliver the desired outcomes at the expected cost to the Australian”.

There has also been poor oversight over project funding and timelines.

By March 2021, only five of the 47 commuter car park sites originally announced (11 per cent) had started construction, with just two of them complete. By this stage, the department had paid $76.5 million of program funding (12 per cent of the total committed).

The auditor’s findings comes after Urban Infrastructure Minister Paul Fletcher pulled the pin on more than $50 million from the program in Victoria, after underestimating the cost of some of the upgrades.

Five commuter car parks in Melbourne’s south-east and a planned road extension will no longer go ahead.

One car park planned for Balaclava station in Melbourne’s south-east lost $15 million of government funding as the site was already earmarked for a social housing project a year before the federal government made its funding pledge.

Mr Fletcher said the department had agreed to all of the audit’s recommendations, while insisting that all infrastructure investments are based on an identified need.

The department had already begun to take actions that align with the auditor’s recommendations, including increased reporting frequency and quality, improved data management and enhanced project tracking, he said.

“The Morrison government is getting on with delivering infrastructure projects that improve congestion and safety for commuters across Australia, making it easier for them to move around our capital cities and ensuring they get home quickly and safely,” Minister Fletcher said.

“There isn’t a single fund that this Government is not determined to rort.”