NASA has released a series of shocking satellite images that appear to reveal the devastating impact of climate change and how it is transforming our planet.

Dubbed ‘Images of Change’, the series of photographs taken from space show changes from a combination of climate change, urbanisation, flooding and fires.

This includes shrinking glaciers in New Zealand, snow in the Sahara Desert, Melting ice in Canada and travel reduction in Wuhan, China due to coronavirus restrictions.

Made up of more than 500 images, including before and after shots taken weeks to decades apart, the collection shows the reality of climate change on the Earth. 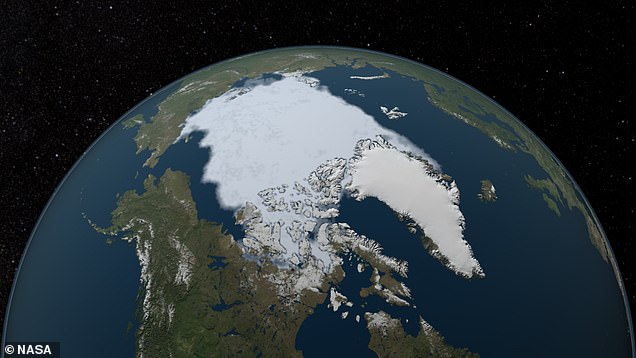 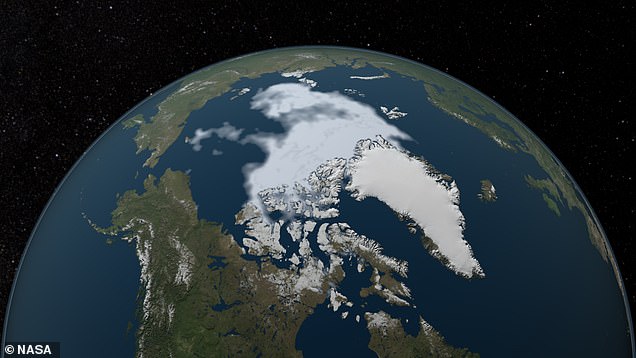 Arctic sea ice extent in 2012 (right) was the lowest on record and is seen compared to the level in 1984 (left). “At the rate we’re observing this decline,” said NASA scientist Joey Comiso, “it’s very likely that the Arctic’s summer sea ice will completely disappear within this century” 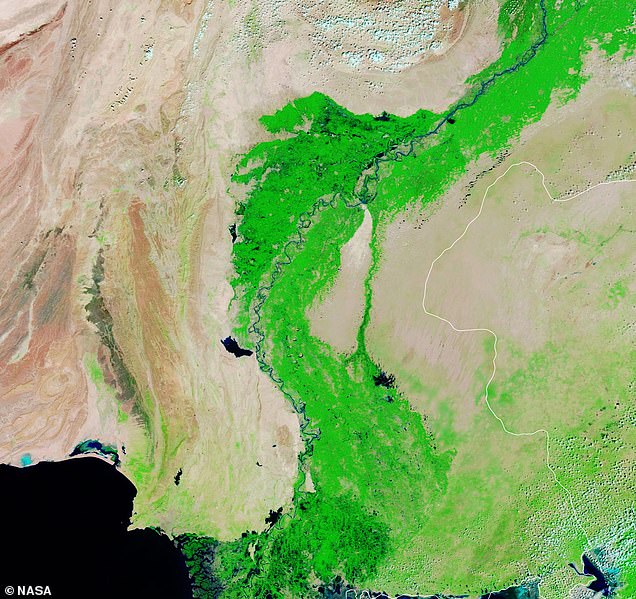 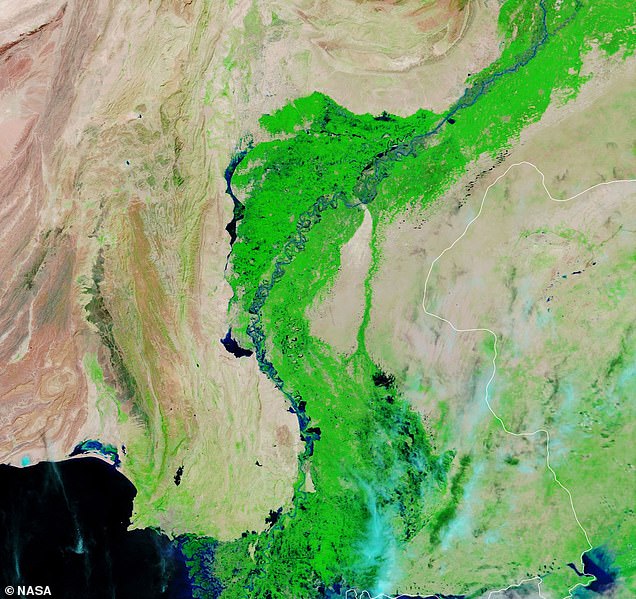 One set of photos appear to show Iceland’s Ok Glacier completely melted away, wildfires scorching Argentina and a monsoon flooding in Pakistan.

Half of the images are taken before an event happened – in some cases up to four decades ago – and half show the same location after a major incident.

Images of Arctic sea ice captured in 1984 and 2020 show the noticeable change in the extent of the frozen region – showing just how much has melted in 36 years. 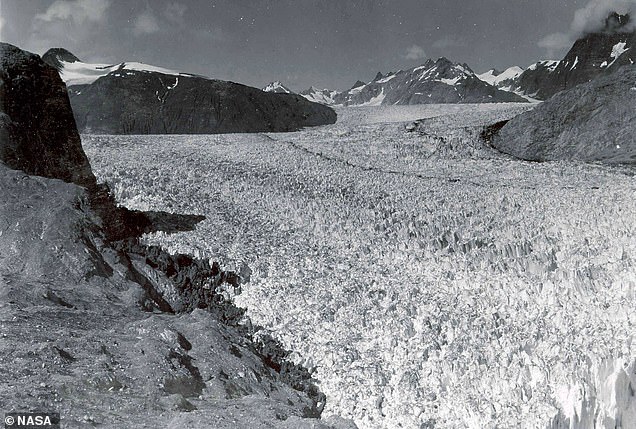 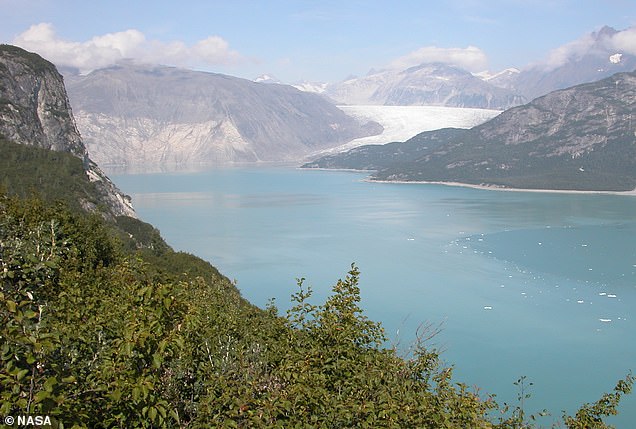 The image of the left was taken in 1941 and shows the Muir Glacier in Alaska alongside its tributary Riggs Glacier. By the time the 2004 image (right) was taken Riggs had retreated 0.4 miles and both glaciers had thinned considerably 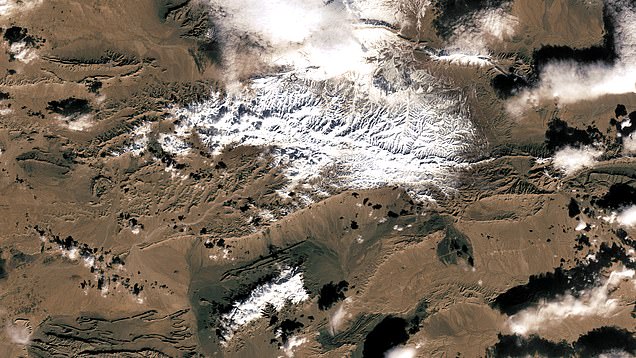 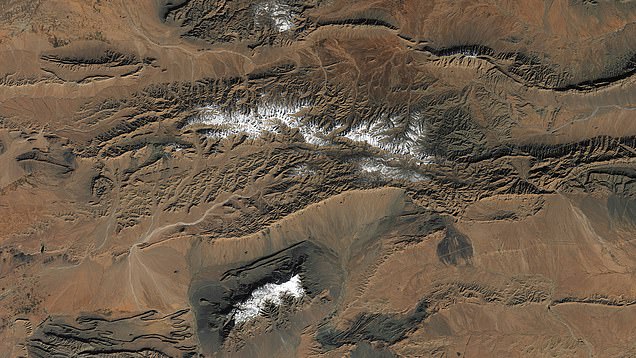 These images taken in 2016 show rare snowfall at the edge of the Sahara Desert – taken with the Landsat 7 satellite. The snow had almost disappeared by the time the right image was taken on December 27

‘The ice is shrinking in the summer, but it’s also getting thinner. You’re losing extent, and you’re losing the thick ice as well. It’s a double whammy,’ said Director of the NSIDC Mark Serreze, when figures were released in September 2020.

The record low for Arctic sea ice was in 2012 – the lowest since satellite records began in 1979 – the 2013 minimum was larger, but continued the long-term downward trend of about 12 per cent sea-ice loss per decade since the late 1970s.

While ice was shrinking in the Arctic, NASA recorded images of rare snow fall at the edge of the Sahara Desert in December 2016.

NASA also captured images of human events – showing a dramatic reduction in traffic levels in Wuhan early in 2020 – at the start of the coronavirus pandemic. 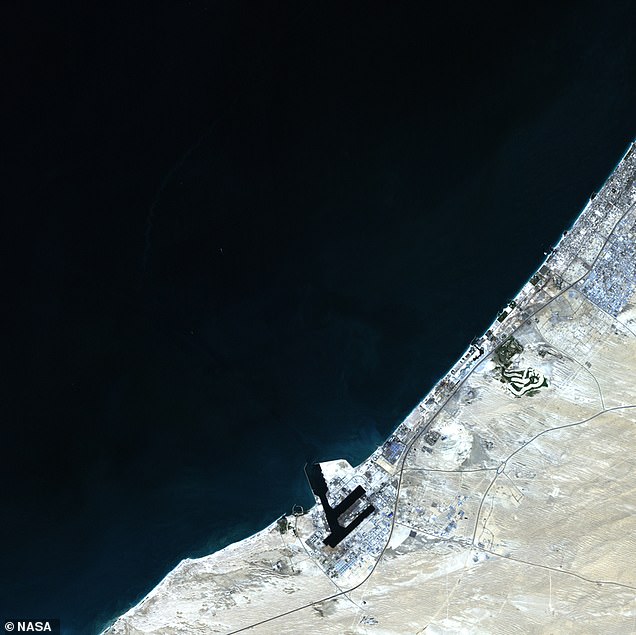 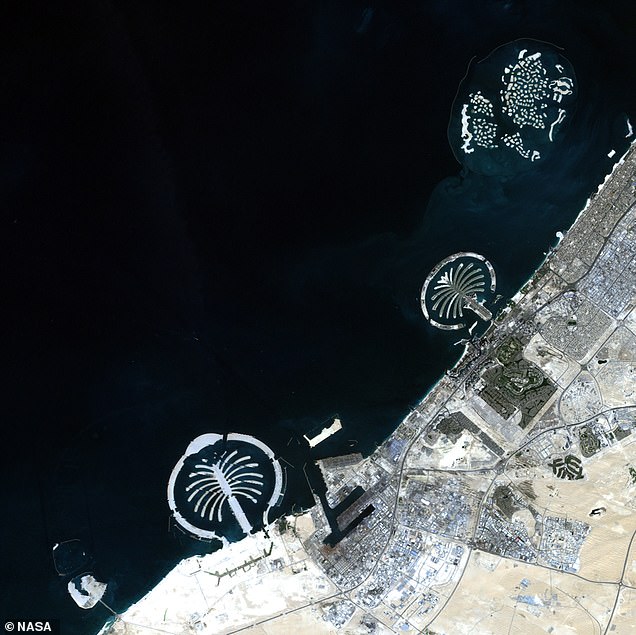 The city of Dubai is situated along the Persian Gulf in the United Arab Emirates. In 2001, work began to create artificial archipelagos along Dubai’s shoreline. The results are visible in the 2012 image 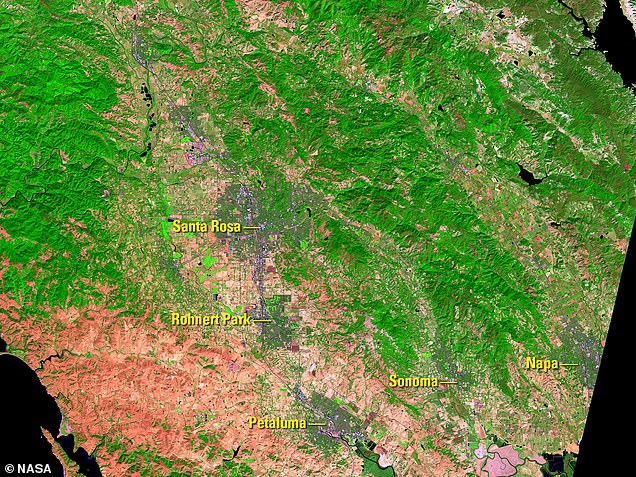 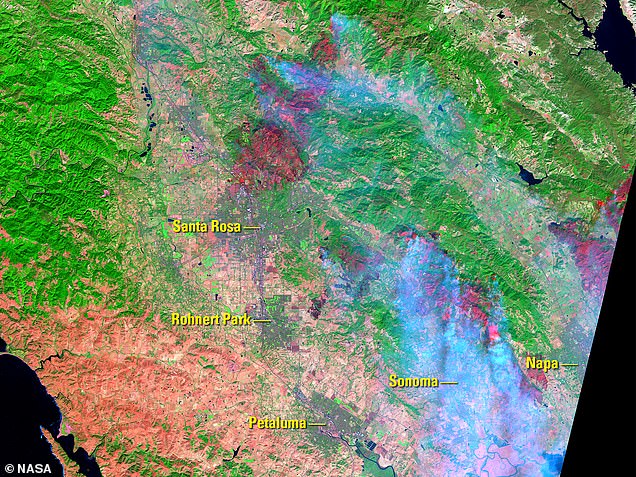 The images have been shared as an interactive gallery on the NASA website, where you can compare them side-by-side or by sliding across.

There are pictures from locations across the globe, at various points in time and split into different categories covering ice, human impact, water and cities.

‘Some of these effects are related to climate change, some are not,’ according to NASA, adding some show the impact of humanity itself on the planet we call home.

‘Some document the effects of urbanization, or the ravage of natural hazards such as fires and floods. All show our planet in a state of flux.’

The full NASA Images of Change interactive gallery is on the NASA website. 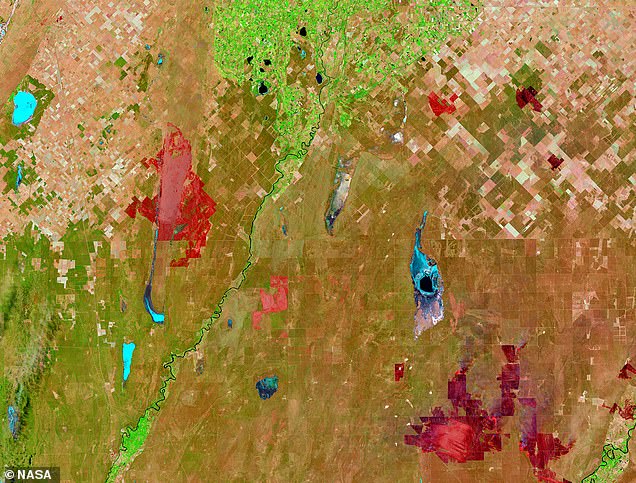 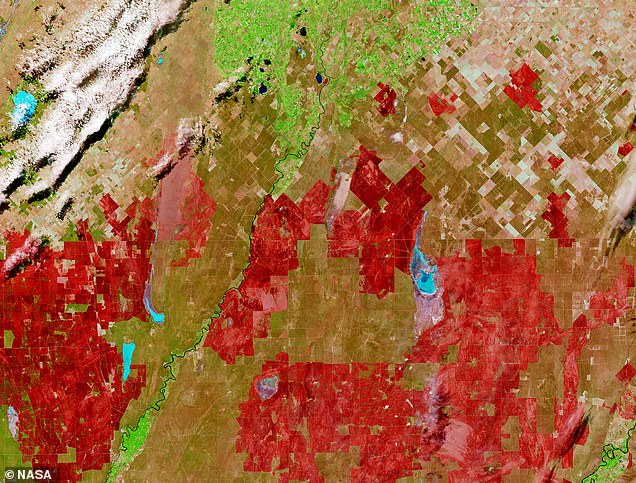 Roughly two dozen wildfires consumed about 2.5 million acres in the Pampas region of Argentina. The first fires started southwest of the city of Bahía Blanca, as shown by small red burn scars in the December 22 image (left). On January 7, 2017 (right), dramatic imagery of larger red burn scars across Argentina’s La Pampa and Rio Negro provinces had been captured

Revealed: MailOnline dissects the impact greenhouse gases have on the planet – and what is being done to stop air pollution

Carbon dioxide (CO2) is one of the biggest contributors to global warming. After the gas is released into the atmosphere it stays there, making it difficult for heat to escape – and warming up the planet in the process.

It is primarily released from burning fossil fuels such as coal, oil and gas, as well as cement production.

The average monthly concentration of CO2 in the Earth’s atmosphere, as of April 2019, is 413 parts per million (ppm). Before the Industrial Revolution, the concentration was just 280 ppm.

CO2 concentration has fluctuated over the last 800,000 years between 180 to 280ppm, but has been vastly accelerated by pollution caused by humans.

The gas nitrogen dioxide (NO2) comes from burning fossil fuels, car exhaust emissions and the use of nitrogen-based fertilisers used in agriculture.

Although there is far less NO2 in the atmosphere than CO2, it is between 200 and 300 times more effective at trapping heat.

Sulfur dioxide (SO2) also primarily comes from fossil fuel burning, but can also be released from car exhausts.

SO2 can react with water, oxygen and other chemicals in the atmosphere to cause acid rain.

What is particulate matter?

Particulate matter refers to tiny parts of solids or liquid materials in the air.

Some are visible, such as dust, whereas others cannot be seen by the naked eye.

Materials such as metals, microplastics, soil and chemicals can be in particulate matter.

Particulate matter (or PM) is described in micrometres. The two main ones mentioned in reports and studies are PM10 (less than 10 micrometres) and PM2.5 (less than 2.5 micrometres).

Scientists measure the rate of particulates in the air by cubic metre.

Particulate matter is sent into the air by a number of processes including burning fossil fuels, driving cars and steel making.

Why are particulates dangerous?

Particulates are dangerous because those less than 10 micrometres in diameter can get deep into your lungs, or even pass into your bloodstream. Particulates are found in higher concentrations in urban areas, particularly along main roads.

What sort of health problems can pollution cause?

According to the World Health Organization, a third of deaths from stroke, lung cancer and heart disease can be linked to air pollution.

Some of the effects of air pollution on the body are not understood, but pollution may increase inflammation which narrows the arteries leading to heart attacks or strokes.

As well as this, almost one in 10 lung cancer cases in the UK are caused by air pollution.

Around seven million people die prematurely because of air pollution every year. Pollution can cause a number of issues including asthma attacks, strokes, various cancers and cardiovascular problems.

Air pollution can cause problems for asthma sufferers for a number of reasons. Pollutants in traffic fumes can irritate the airways, and particulates can get into your lungs and throat and make these areas inflamed.

Women exposed to air pollution before getting pregnant are nearly 20 per cent more likely to have babies with birth defects, research suggested in January 2018.

Living within 3.1 miles (5km) of a highly-polluted area one month before conceiving makes women more likely to give birth to babies with defects such as cleft palates or lips, a study by University of Cincinnati found.

For every 0.01mg/m3 increase in fine air particles, birth defects rise by 19 per cent, the research adds.

What is being done to tackle air pollution?

The UK government has announced plans to make the country carbon neutral by 2050.

They plan to do this by planting more trees and by installing ‘carbon capture’ technology at the source of the pollution.

Some critics are worried that this first option will be used by the government to export its carbon offsetting to other countries.

International carbon credits let nations continue emitting carbon while paying for trees to be planted elsewhere, balancing out their emissions.

No new petrol or diesel vehicles by 2040

In 2017, the UK government announced the sale of new petrol and diesel cars would be banned by 2040.

However,  MPs on the climate change committee have urged the government to bring the ban forward to 2030, as by then they will have an equivalent range and price.

The Paris Agreement, which was first signed in 2015, is an international agreement to control and limit climate change. Pictured: air pollution over Paris in 2019.

The speedy electrification of Norway’s automotive fleet is attributed mainly to generous state subsidies. Electric cars are almost entirely exempt from the heavy taxes imposed on petrol and diesel cars, which makes them competitively priced.

Criticisms of inaction on climate change

The Committee on Climate Change (CCC) has said there is a ‘shocking’ lack of Government preparation for the risks to the country from climate change.

The committee assessed 33 areas where the risks of climate change had to be addressed – from flood resilience of properties to impacts on farmland and supply chains – and found no real progress in any of them.

The UK is not prepared for 2°C of warming, the level at which countries have pledged to curb temperature rises, let alone a 4°C rise, which is possible if greenhouse gases are not cut globally, the committee said.

It added that cities need more green spaces to stop the urban ‘heat island’ effect, and to prevent floods by soaking up heavy rainfall.