Six weeks before the start of the season the world's premier netball league made an announcement that, while bubbling under the surface for years, took players, coaches and fans by surprise. 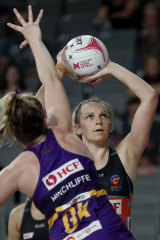 Giants shooter Jo Harten is the league’s most prolific from two-point range.Credit:Getty

For the last five minutes of each quarter, a shot from three metres or further is now worth two goals – but is the super shot twice as difficult? After five rounds of the season, before this weekend's fixtures, the simple answer is: no, it isn't.

Shooters have scored about 87 per cent of their one-point attempts according to Champion Data, the league's official data providers. You'd expect players to find it harder from further out and you'd be right: only 53 per cent of two-point attempts were successful.

So the super shot is harder – but not twice as hard. Once you factor in misses two-point attempts have delivered about 1.07 points per shot, far ahead of the 0.87 points on offer from one-point range. You can't score "1.07 points", of course, but if a team were to solely shoot from range in super shot periods: five attempts each quarter would leave your team four or five goals better off by the final whistle.

Longer shots do come at a cost. Two-pointers are about eight times more likely to fly out-of-bounds. Overall, teams retained the ball 46 per cent of the time from long misses, compared to 59 per cent of those closer in. 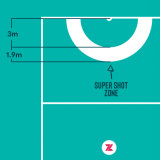 Shots taken from more than three metres away are worth two points.Credit:Super Netball

On top of that, a team is slightly less likely to be next to score after a long miss than closer in – but not by enough to outweigh an extra point. In fact, if you remove the Firebirds from the equation, who struggled with the shot early in the season, Champion Data says two-point attempts have been worth about 22 per cent more in the long run this season.

Like it or not, elite sport is a numbers game. Take basketball, for example: the mid-range shot all but disappeared from the NBA as players got too good from three-point range. The numbers are similar: a mid-range attempt in the NBA was worth about 0.85 points between 2013 and 2018, compared to about 1.10 from beyond the arc. Those that stuck with the mid-range shot were left behind and teams eventually conformed.

So, it's settled. Say goodbye to the one-point shot – for five minutes a quarter, at least. Giants shooter Jo Harten, a critic of the super shot despite being the early standout, says it's not that simple.

"[The shot itself is] not harder," says Harten. "But if you're behind … there's a mentality shift in how you prepare for each shot and the weight of what that means."

For more than a century the aim of the game was to get the ball into a player's hands as close to the hoop as possible. As shooters drift further from the hoop they have to contend with midcourters, who have adapted by dropping back and clogging the top of the circle.

"You're running at weird angles to try and land in the two-point zone while the ball is being lifted over the [defenders] out the front … it's a weird line as a shooter to run because usually you run in a straight line towards the post."

Another arguably overshadowed change was the introduction of unlimited rolling subs, where players can come on during play.

When teams found out about the super shot the Giants considered bringing on specialist long-range shooters for those periods but tradition prevailed. Players and coaches won't view the game as being won and lost on a spreadsheet.

"If you can try and maintain as steady a partnership as possible you're probably going to get a better result than switching on three or four shooters," Harten says.

Super Netball will review the changes at the end of the season. It says it never considered increasing the points earned for both shots; a rise to two and three points would make the super shot worth just 50 per cent more. The only debate was of distance.

Sport does lose a bit of its magic if you obsess over analytics but their merit is proven. We will see teams embrace the super shot yet lose games but, in the long run, those that ignore the numbers are destined to be left behind.