NYPD Chief of Department Terance Monahan say attacks on stores during protests are coordinated by outsiders being paid to turn the movement into violence. FOX Business’ Jackie DeAngelis with more.

The New York Police Department’s top cop is calling out “organized looters,” who he says are “strategically” leaving piles or buckets of debris on street corners citywide.

“This is what our cops are up against: Organized looters, strategically placing caches of bricks & rocks at locations throughout NYC,” NYPD Commissioner Dermot Shea wrote in a Wednesday morning tweet, along with a video showing four blue boxes filled with gray debris.

An NYPD spokesperson did not immediately respond to FOX Business' request seeking information and comment.

Looters and rioters have reportedly used bricks, rocks and cinderblocks as tools to burglarize stores and small businesses, or even as weapons against law enforcement.

Police said nearly 700 people were arrested and several officers were injured during the chaos Monday night and early Tuesday. The official arrest numbers for Tuesday night into Wednesday have not yet been released. 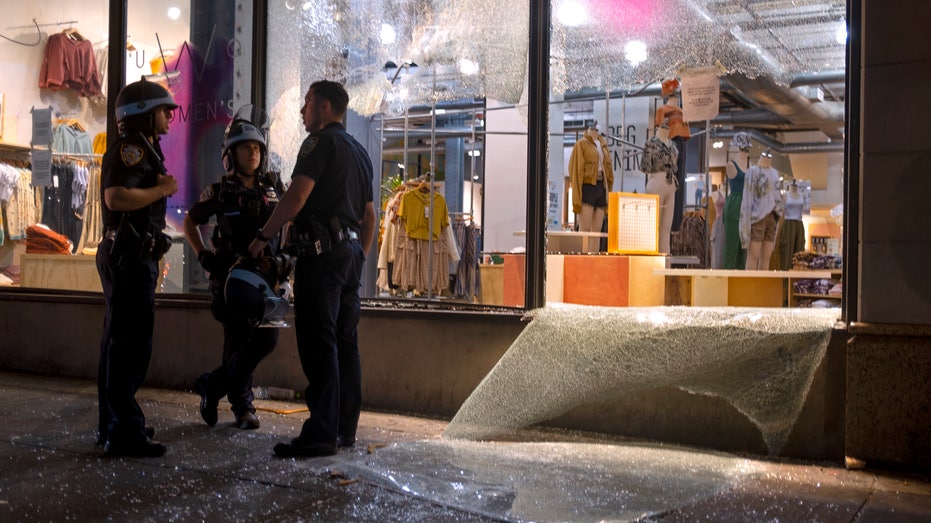 Damage is seen at an Urban Outfitters store near New York’s Union Square Sunday, May 31, 2020, after it was damaged in the midst of a protest highlighting the death of George Floyd. (AP Photo/Craig Ruttle)

Protests flared in response to the death of George Floyd, a black man who died last Monday after a white Minneapolis police officer pressed his knee on Floyd's neck for at least eight minutes.

Public and elected officials have said the peaceful protests have devolved in some cases into organized riots, including some led by white supremacy and antifa groups.

Floyd, who was in handcuffs at the time, died after the officer ignored bystander shouts to get off him and Floyd's cries that he couldn't breathe. His death, captured on video, sparked days of protests in Minneapolis that have spread to cities around America.