It's not just the clink of coins tossed by passers-by that Simon Paparo misses – though he does miss that.

"If it wasn’t for JobKeeper, I wouldn’t have much income at all right now," says the Melbourne busker, 38.

It’s not just the music, either – though he does miss that, too, along with the other buskers who have formed an online chat group for mutual support. 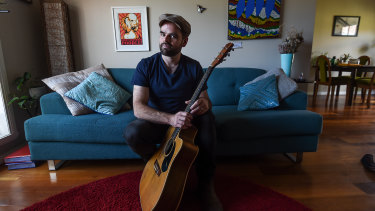 "It was our outlet, our way of expressing ourselves," he says. "It’s not just the income but the mental health as well."

More than that, it’s the interaction with Melbourne and its people that Paparo misses. It’s sitting on Bourke Street Mall – his favourite "hotspot", especially on a Sunday morning – playing folk, pop and easy listening classics, "giving people a couple of minutes’ break from their day-to-day".

"That was a really beautiful part of Melbourne."

In the meantime, though, Paparo enthusiastically welcomes a new City of Melbourne initiative inviting Victorians to throw their support behind their missing performers, who’ve been off the streets since autumn.

The council is about to launch a "Tip My Hat" competition for Melbourne buskers, inviting them to send videos of their performances to be showcased on Instagram.

Viewers will vote for a weekly winner of a $300 cash prize and entry into the annual Melbourne Music Week busking program.

And the performances will come with a virtual guitar case on the pavement: a link for viewers to make direct donations.

Lord mayor Sally Capp said Melbourne’s buskers were among the hardest hit by the pandemic, and they were a "major part of what makes our city so unique and vibrant".

"We want to help them reach a wider audience," she said. "This online busking competition is an opportunity for everyone to listen and watch their incredible work, and a practical way we can offer support to our buskers to help them get through the pandemic."

Councillor Rohan Leppert, chair of the arts and culture portfolio, said he and other councillors and staff had frequently spoken to buskers about the hit to their livelihoods.

"We really wanted to help," he said. "Buskers are part of the make-up of Melbourne’s culture and soundscape … I really miss that unexpected, unpredictable sound that makes Melbourne such a wonderful place."

He said the council would do "everything we can" to get the busking scene up and running again as soon as public health orders allowed.

But he also acknowledged the pandemic was likely to accelerate a move away from the use of cash, so there would need to be "a whole lot more" help for buskers to access cash-free payment systems.

"Most professional buskers, we’re always preparing for hard times: what if it rains for a month," he said. "But we just weren’t expecting this hard a time. We lost our summer, when we make most of our living, due to the fires, when you couldn’t go out on the street because you couldn’t breathe.

"And then right on the heels of that … we were mandated to be at home. I’m all for the lockdown, it’s an absolute necessity for society to recover. But now it’s been since March and a lot of performers are really starting to run dry."

He said the government needed to do more to make sure street performers were not "driven further into poverty" – and after the pandemic passed he hoped cities would "relax on some of the heavy handedness" to help performers get back on the streets.

Tip My Hat kicks off next Thursday, September 17, and runs for a month on the City of Melbourne Instagram page.