It’s the thought that counts! People reveal the LEAST romantic Christmas presents they’ve received from their other half – from a compost bin to an extension lead and a tin of Spam

From an iron to anti-ageing serum, people have revealed the least romantic gifts they’ve received from their partner at Christmas.

The discussion began on Facebook’s B&M Bargains and More group, after one woman, thought to be from the UK, who was given a ladder and an extension lead by her now ex-boyfriend asked others to contribute their own experiences.

Many people began reflecting on unwrapping their gift to discover a household appliance such as a vacuum cleaner, iron or slow cooker.

Others said they’ve received presents that gave the impression they ought to make more effort with their appearance. 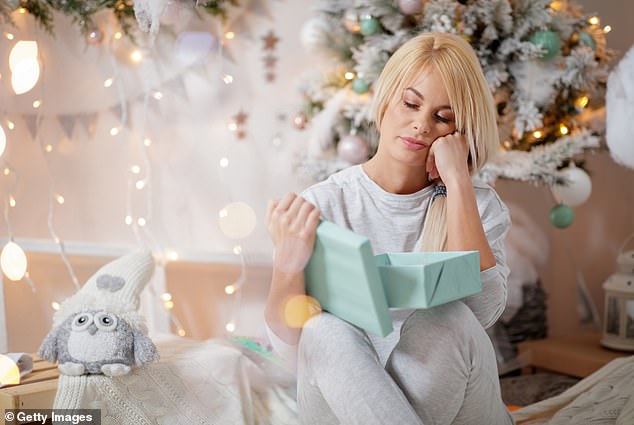 Amused by her own experience, the woman wrote: ‘Not B&M related but I was just wondering what was the least romantic thing your partner previously bought you for Xmas?

‘Mine was a ladder and extension lead from my now ex-boyfriend lol.’

Adding an update, she penned: ‘I’m so amazed and amused by all of your posts and can’t believe how much you’ve all made me laugh. I hope you all have a lovely Xmas and get everything you wish for.’

A stream of responses confessed they’ve been left disappointed after receiving household appliances.

One person wrote: ‘Cooking utensils and a tool bag… both the same Christmas.’

‘I just bought a door bell for the home and got told I ruined the surprise as he was going to get me one for Christmas,’ another said.

A flood of responses came from women who’ve received household appliances including an iron, vacuum cleaner and pots

Others admitted they were frustrated by unconventional gifts including toe nail clippings and mosquito wipes.

One person wrote: ‘Wrist weight. Because I said I was gonna start walking.’

‘A jar of toe nail clippings wrapped up by my (funnily enough) ex-fiance as he knew how much I hated him leaving them on the end of the sofa.’

Another said: ‘Highlights include: a rubber torch, one windscreen wiper, an iron, a deep fat fryer.’

Others said they’ve received unconventional gifts including wrist weights, a single windscreen wiper and a jar of toe nail clippings

‘A nose hair trimmer,’ one revealed, before admitting: ‘I love it.’

One revealed her attempt to give a hint backfired, writing: ‘A packet of paracetamol and some mosquito wipes in a Christmas stocking… all because I said, “Not chocolate but something I could use”. I was hinting at bath stuff! Deaf ears comes to mind.’

Another said: ‘Socks that dyed my feet black and a pair of gloves with a split in the seam… all in the same Christmas.’

Some revealed they’ve received gifts that suggested they should make more of an effort with their appearance, including anti-ageing serums and a nose hair trimmer