Plans to cut in half Foxtel’s obligation to fund Australian drama have been blocked in federal Parliament, with Labor’s spokesman for the arts accusing his ministerial counterpart of cosying up to Hollywood while “hating” Australian storytelling.

Amendments to the Broadcasting Legislation Act proposed by Arts and Communications Minister Paul Fletcher would have cut Foxtel’s obligations under the New Eligible Drama Expenditure (NEDE) scheme from 10 per cent of its annual programming spend to just 5 per cent. 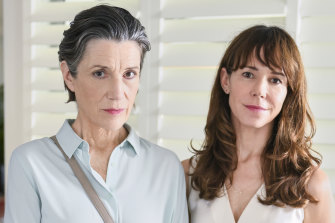 Harriet Walter (left) and Frances O’Connor in The End, a drama made possible at least in part by Foxtel’s Australian drama obligations.Credit:Foxtel

In 2018-19, the last year for which figures are available, Foxtel spent just under $25 million on Australian drama, down from almost $57 million the year before. Under the proposed new measures, it could have been expected to spend as little as $12.5 million going forward.

The production sector feared the move would have devastating consequences on the amount of Australian drama made for the pay-TV platform, and on Australians ability to see their own stories on screen.

While the proposed amendments passed the House of Representatives, where the Coalition holds a majority, at their first reading, a multi-party Senate committee recommended the portion of the Bill dealing with Foxtel’s content obligations “be withdrawn”, and that the government instead should “introduce measures to harmonise the regulatory framework for Australian content obligations”.

What that means is the committee – including Coalition MPs – objected to the government’s attempt to fast-track a reduction in Foxtel’s obligations to Australian drama while it had yet to do anything about regulating the streaming companies, such as Netflix, on the same front.

Foxtel already attracts scrutiny from other parts of the media because of the funding it has received from the federal government. Fox Sports received $30 million from the federal government in 2017 to increase coverage of women’s, niche and community sport over a five-year period. Another $10 million of taxpayer funds was provided to Foxtel (which now owns Fox Sports) in July 2020 as a coronavirus response measure, bringing the total to $40 million.

The grants were provided without tender, meaning broadcasters such as Nine Entertainment Co. (owner of The Sydney Morning Herald/The Age), Seven West Media, Network Ten and the public broadcasters were unable to make a case to receive the funding. The Auditor-General is considering reviewing the federal government grants. 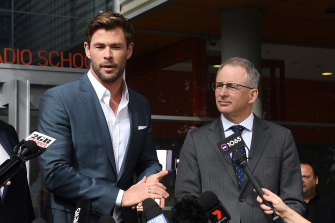 Federal arts minister Paul Fletcher (right) with actor Chris Hemsworth at the July 2019 announcement that a new Marvel movie was set to film in Sydney.Credit:Kate Geraghty

Committee members from the Labor Party, the Greens and the National Party all noted their concerns with the negative impact a reduction in drama content would have, with the Nationals noting: “Australian scripted drama provides a unique opportunity for our nation to tell our stories, to entertain through our own voices and to share our culture with the rest of the world”.

The Bill was amended to excise the NEDE component, and passed last week.

Speaking to the amended Bill in the House of Representatives last Wednesday, Labor’s shadow minister for the arts, Tony Burke, launched a scathing attack on Mr Fletcher.

It didn’t matter what the delivery mechanism was, he added, the only relevant question was “are Australians going to be seeing the stories of our own nation? Are Australian children going to be growing up watching Australian stories, whether the remote goes to free-to-air, to cable or to the apps that come in through the web.

“Whichever way you’re getting those stories, you want to make sure that Australian stories are part of it.”

A spokesman for Mr Fletcher acknowledged there were concerns “that the reduction in the Foxtel local content spend should not occur in the absence of an Australian content spend obligation being placed on the streaming-video-on-demand providers”.

To date, the minister’s preferred approach to regulating an Australian content requirement on the streaming services has been to allow a two-year wait-and-see period in which they might demonstrate their willingness to commission and screen such content voluntarily. Failure to act in good faith might lead to set requirements, which both the streaming services and Free TV (the lobby group that acts on behalf of the free-to-air networks) have argued against. They claim content quotas would raise the costs of creating programs and put further pressure on an already under-resourced production sector.

Though Mr Fletcher has never committed to a figure, the industry believes the minister favours a commitment equivalent to 5 per cent of Australian revenue. A spokesman for the minister said that the government intends to “revisit the question of the content obligations on Foxtel in the context of bringing forward a policy proposal to impose an Australian content spend obligation on streaming services.”

That suggests the favoured 5 per cent figure for Foxtel and the streaming services – which the production sector argues is far too low in both cases – may only be deferred, not dead.

The Business Briefing newsletter delivers major stories, exclusive coverage and expert opinion. Sign up to get it every weekday morning.