The Morrison government has shut down the idea of extending its $130 billion wage subsidy to more casual workers one day after signalling it would be as “inclusive and reasonable” as possible.

Industrial Relations Minister Christian Porter said the government would “refine” the plan before it goes to a vote on Parliament on Wednesday but said the essential features would not be changed. 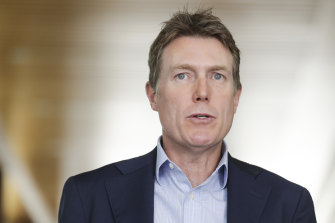 Mr Porter stepped back from earlier remarks that indicated he was willing to negotiate with the Australian Council of Trade Unions on the rules for casual workers to sign up to the scheme.

The government closed off that option on Monday morning with a warning that it would not change the “essential principle” of the scheme, which is only available to casual workers who have worked for one employer for the past year.

Mr Porter said on Monday morning the bill would apply the definition of casual worker announced last week, requiring someone to have been “attached” to an employer for a minimum of one year.

"You have to have some kind of guiding limits on the outer edges even of a scheme that represents expenditure of this extraordinary amount," Mr Porter told ABC Radio National.

"We will require regular and systemic attachment to an employer for 12 months."

Asked if that meant a casual worker had to have worked for a single employer for a year, Mr Porter said: "That's correct. That's the standard definition that exists in the Fair Work Act. Now exactly the wording of that definition, how it's refined, is something we're working through at the moment."

Government sources indicated on Sunday morning they were willing to negotiate on the definition of casual workers, with plans to send the draft bill to the ACTU, Labor and Senate crossbenchers.

The Sydney Morning Herald and The Age reported this on Monday as a step towards widening the scheme to more casual workers.

Mr Porter suggested on Sunday he would negotiate the details with ACTU national secretary Sally McManus.

“We acknowledge there are many people regularly employed casually but may move from employer to employer,” Mr Porter said.

“We’re working on that and listening and so when you see the final draft you will see we are trying to be as inclusive and reasonable as possible.”

Government sources said on Sunday the definitions were difficult to pin down but were being negotiated to be as flexible as possible.

But one minister told The Sydney Morning Herald and The Age on Monday morning the bill would be put to the Parliament “as is” because it already delivered benefits to a big group of workers.

The JobKeeper package offers a wage subsidy worth $1,500 per fortnight to up to six million workers over six months.

Employers must register for the scheme and must use the funds to pay workers including casuals who have been with them for at least 12 months.

Prime Minister Scott Morrison, Treasurer Josh Frydenberg and Finance Minister Mathias Cormann have held out against changes to broaden the eligibility for the payments.