A pregnant three way couple have insisted their baby will have three times as much love as a ‘normal child’ – with the biological parents even hoping to let their girlfriend breastfeed.

But three is soon to become four after Lo and Mike naturally conceived a baby in March, with the triad hoping to give three equal parts flesh and blood to their offspring by letting Jess share the task of nursing the child.

Jess revealed that breastfeeding would allow her to feel closer to the child, while Lo added: ‘I know some women might be funny about letting another person nurse their child but we want to get as much of each of us in the baby as we can, because it’s a 33 per cent share from each of us.’ 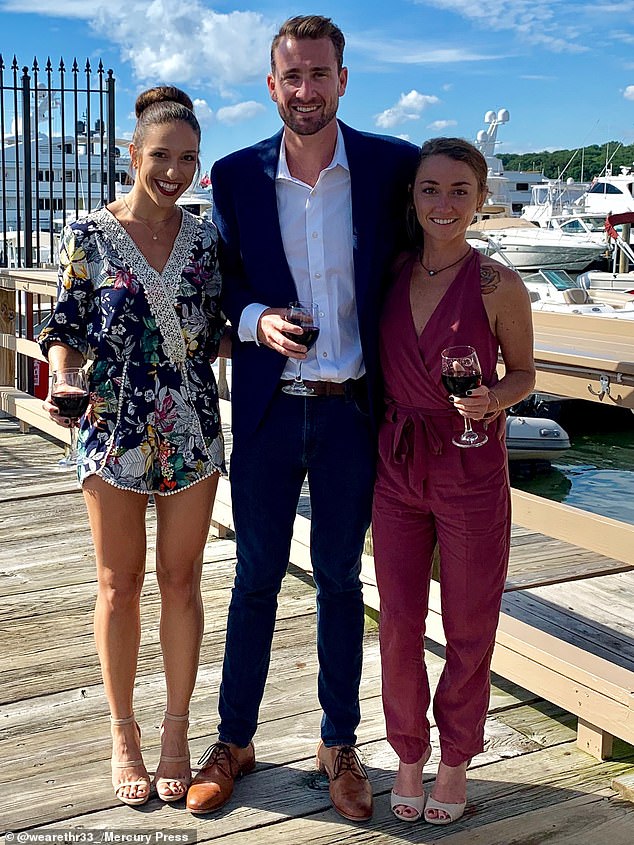 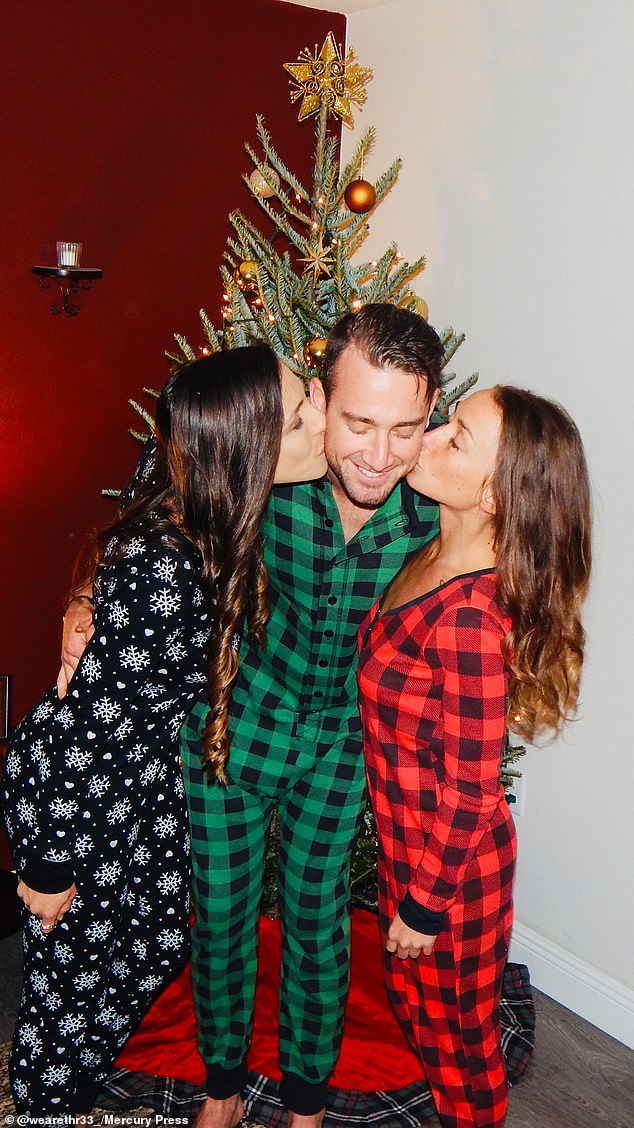 College sweethearts, Mike and Lo shacked up as they graduated and got married four years ago.

Lo said: ‘Before we met Jess our relationship was a lot more vanilla. 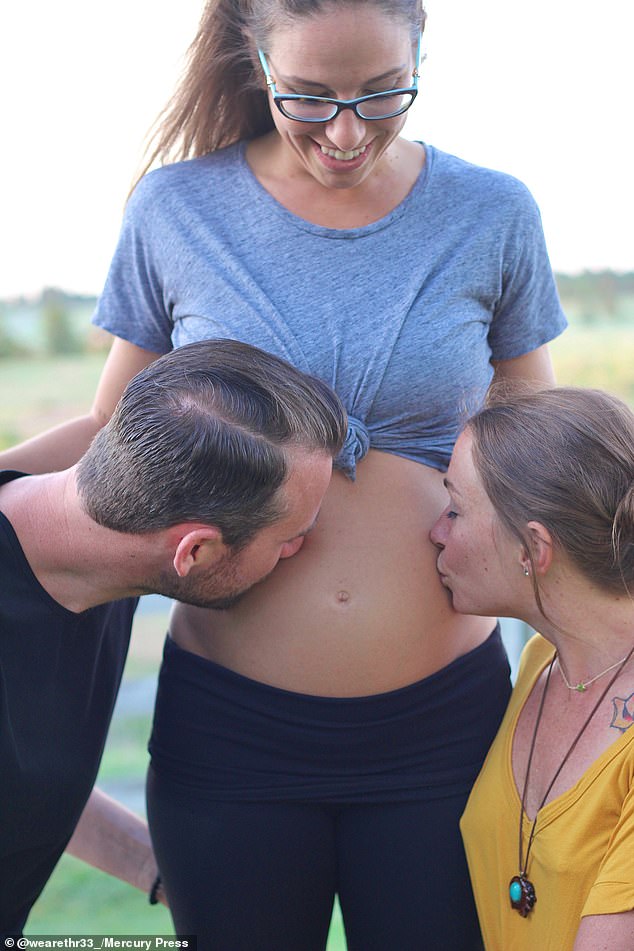 The throuple began trying for a baby  and naturally conceived in March of this year, with their first child due at Christmas 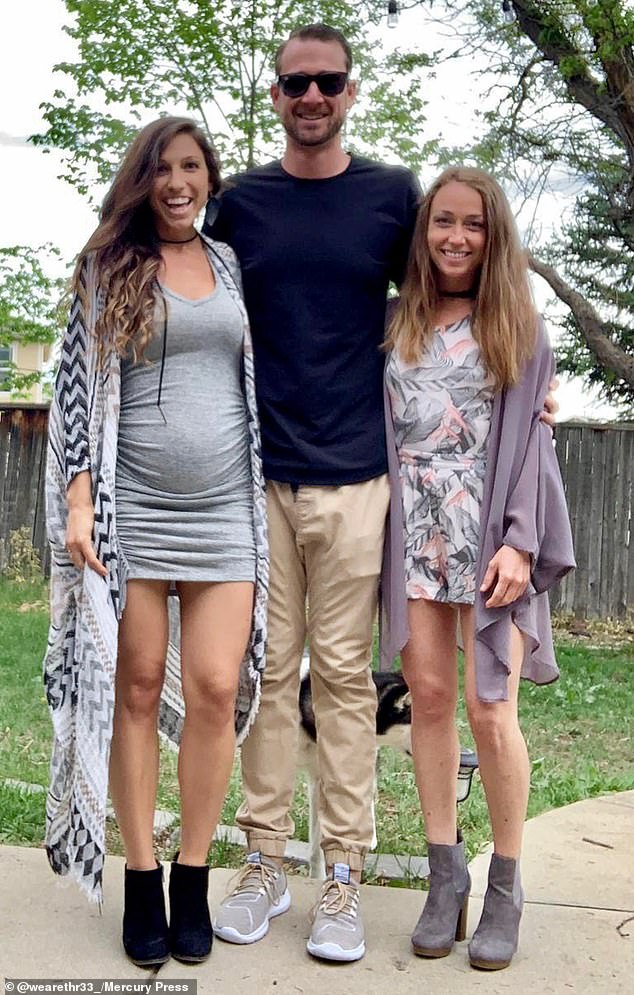 Lo and Mike feel their baby is just as much Jess’ as theirs, and hope she will be able to breastfeed their child to affirm the bond

‘She started laughing and explained that Jess was polyamorous. We didn’t even know what that meant, I remember Mike and I had to google it.’ 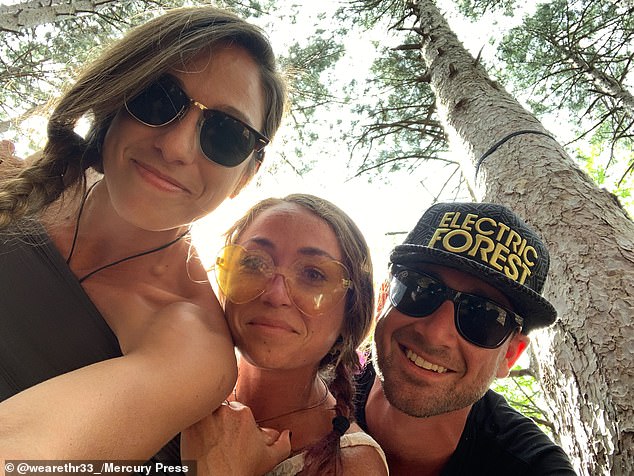 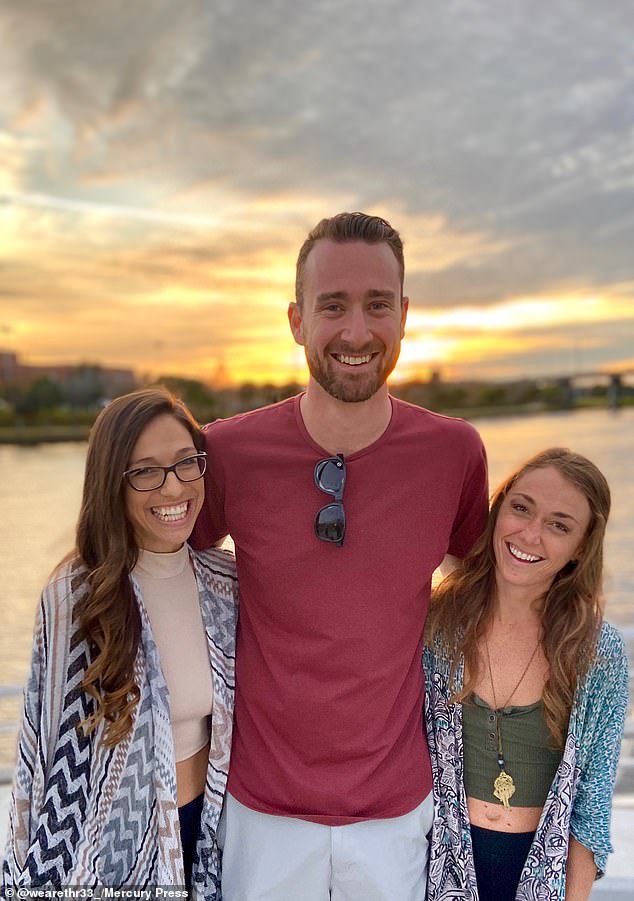 Lo and Mike revealed that Jess has been an ‘enhancement’ to their marriage, and feel committed to her

‘I remember the day after we met Jess we were at her house and we both agreed we wanted to see more of this girl, we both just loved being around her, it was organic like any normal relationship.’

Meanwhile Lo said Jess had brought a new dynamic to their relationship, revealing: ‘Our sex life has definitely been enhanced having another person in the bedroom. It brings a whole new dynamic, there are more sensations, more to look at and more to touch.

Can you breastfeed without giving birth?

The process of making milk without pregnancy is called induced lactation.

For a mother who gives birth to her child, the hormones of pregnancy and the postpartum shift in those hormones cause a woman’s breasts to produce milk.

The natural production of breast milk (lactation) is triggered by a complex interaction between three hormones — estrogen, progesterone and human placental lactogen — during the final months of pregnancy.

At delivery, levels of estrogen and progesterone fall, allowing the hormone prolactin to increase and initiate milk production.

A mother who is not the one giving birth can develop a breastfeeding relationship by giving her body other messages to produce some milk.

If a person has months to prepare, they can have hormone therapy — such as supplemental estrogen or progesterone — to mimic the effects of pregnancy.

They may then begin pumping your breasts with a breast pump to encourages the production and release of prolactin.

‘We saw it as an enhancement to our marriage, it wasn’t one sided, it wasn’t just one of us making the decision.’

Despite some initial concerns from Lo’s family, who were as surprised as she was to learn that she was bisexual, the throuple was soon widely accepted by all three families and their friends.

After discussing their future as a three, the throuple decided to start trying for a baby, naturally conceiving their little miracle in March this year.

With their addition due to arrive on December 26 later this year, the trio have dubbed the baby their Christmas miracle.

While Lo will be carrying the child, Jess intends to be involved as much as possible, acting as her home birth doula and will even nurse the baby by syncing up her cycle and hormones with Lo to stimulate milk production in her body.

Lo said: ‘The first question that everyone asked us was ‘who is carrying the baby?’.

‘Most people have been very sweet and thoughtful but even just a few months ago before we announced the pregnancy, we were seeing comments from people saying things like ‘wait until one of them gets pregnant, we will see what happens then’.

‘But we’ve been trying to have a baby together for over a year and when we found out we were pregnant it was one of the best things that ever happened to the three of us.

‘These comments always come from people who wouldn’t be able to handle this themselves, and that’s ok because it’s not for everyone.’

She added: ‘Jess will be involved as much as she can all the way down to nursing the baby.

‘I wanted Jess to be in this baby as much as possible because it will look like me and Mike, so we want as much of her DNA as we can get too.

‘It will have so much more opportunity to grow and will have everything that I could ever possibly want or need.’

Jess said: ‘At this point I don’t see myself bearing a child but to still be able to have that skin-to-skin contact with this baby and being able to nurture it in that way is so important to me. 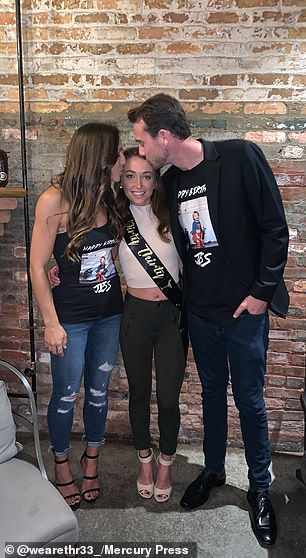 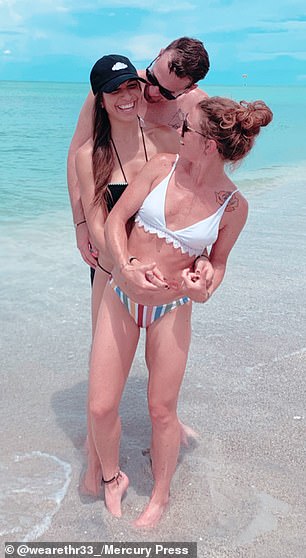 Meanwhile Jess said she knows the couple are as committed to her as they are to each other, and believes they are planning a proposal 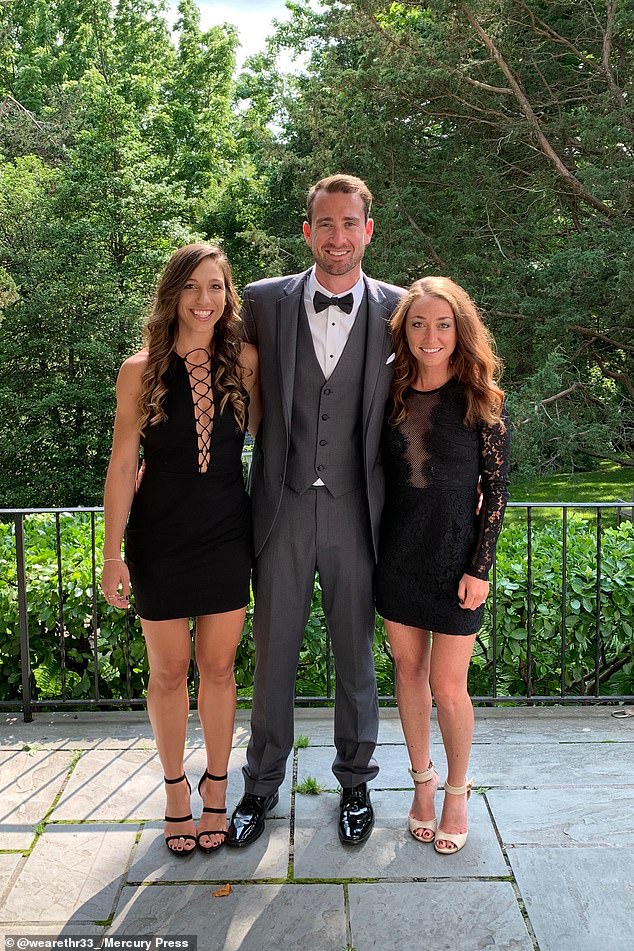 The throuple admit that many people question their relationship, with some wondering how Mike can handle two women, or asking if Jess feels left out as she is not also married to her partners 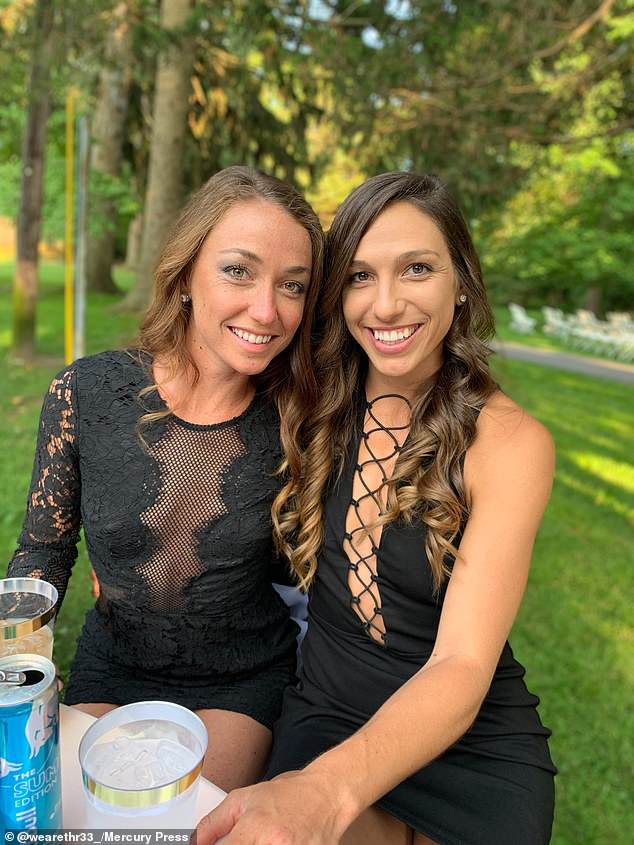 And while Lo’s family were initially surprised to learn that she was bisexual, the throuple have been widely accepted by all three families and their friends

‘Formula is the last resort and last thing that we want to give our baby so being able to take some of that burden off Lo so she is able to rest and recuperate is special too.

‘Not a lot of women can say I’m going to take this shift off and let my girlfriend breastfeed tonight.

‘I absolutely adore Lo so being able to do that for her makes me feel almost as if the baby came out of me as well.’

And the throuple are positive that their unique set up will help them all be better parents, with Jess revealing: ‘We have met a couple of other throuples and the kids they have are amazing. 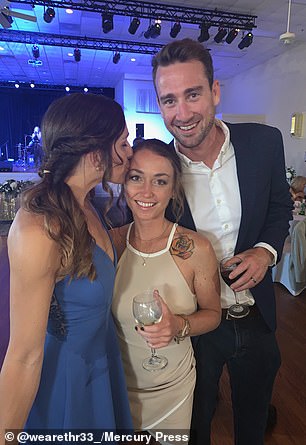 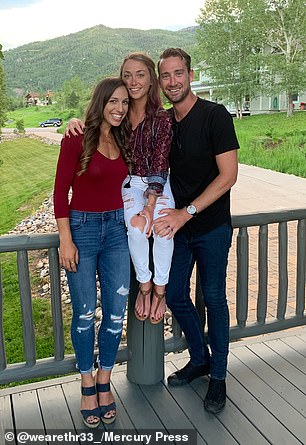 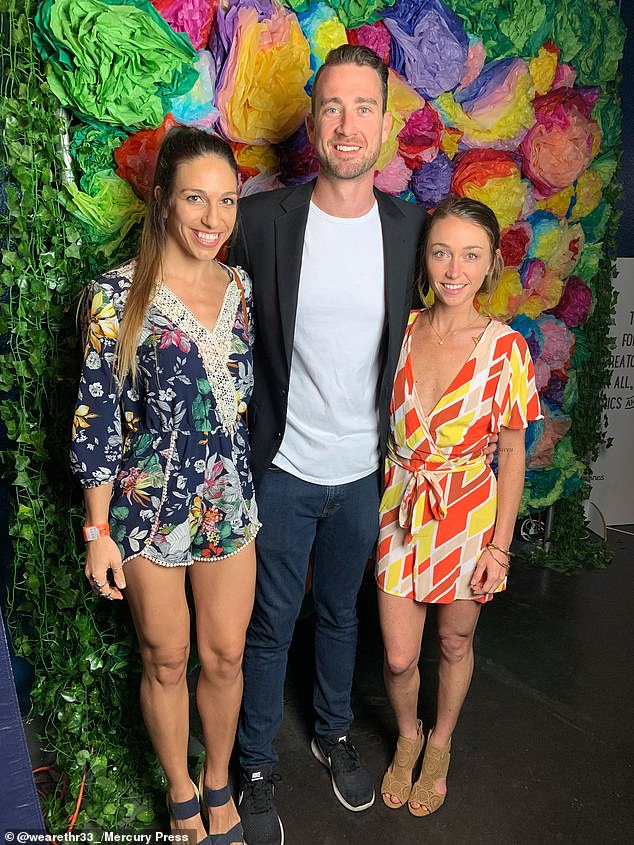 Meanwhile, Jess said she doesn’t feel lesser within the relationship with the married couple, adding that she ‘knows that the two of them are planning an engagement’ 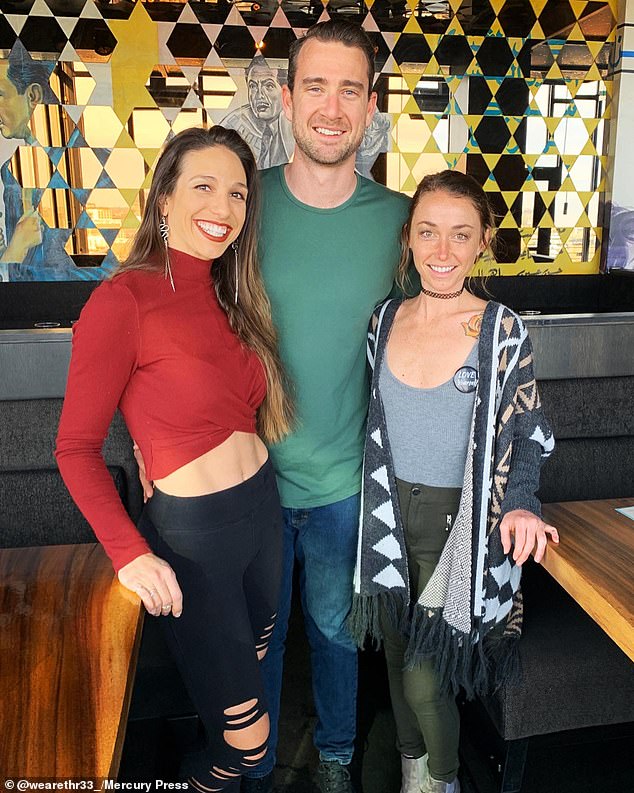 The throuple began trying for a baby in March, planning for Lo to carry the child and Jess to be as involved as possible

‘They know so much more love and understanding and acceptance of people they have such huge hearts these throuple children have no hate for anyone.

‘Some of our friends who are in two-person relationships joke that they wish they had an extra pair of hands to help out with their kids.

She added: ‘The three of us can’t wait.’

But the trio admit they regularly face people who don’t understand their lifestyle, with questions over their sex life and doubts about jealousy over the various intertwined relationships. 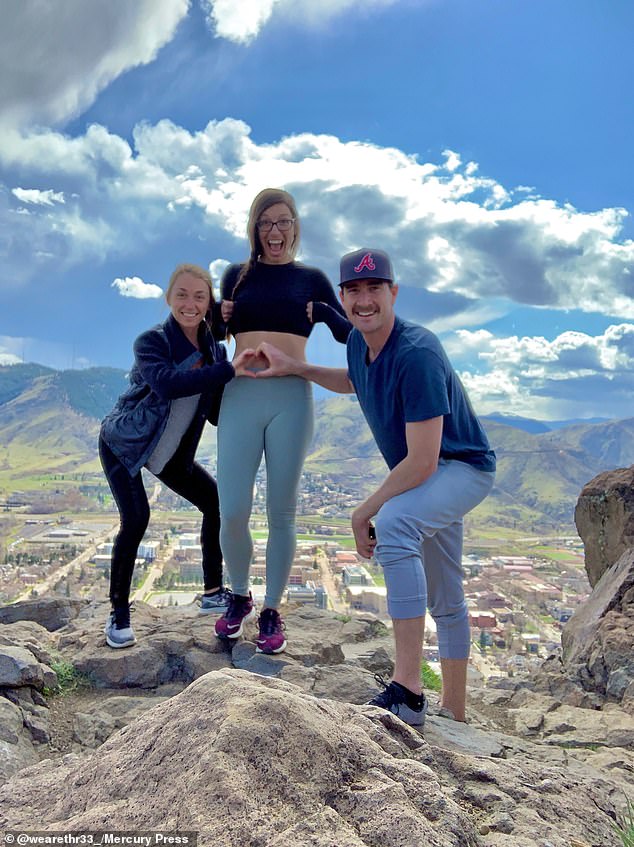 Jess plans to be involved as much as possible, acting as Lo’s home birth doula and syncing up her cycle and hormones with Lo to stimulate milk production in her body 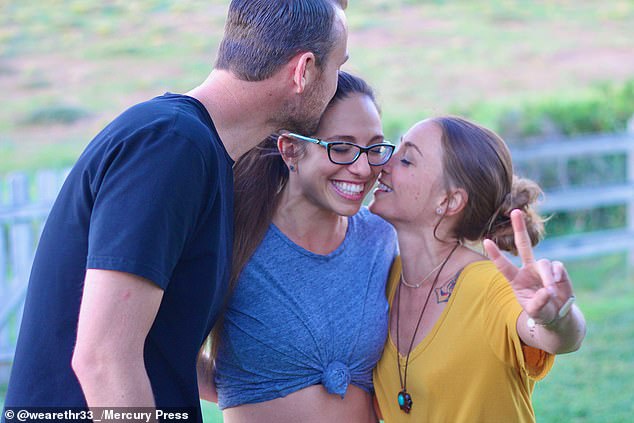 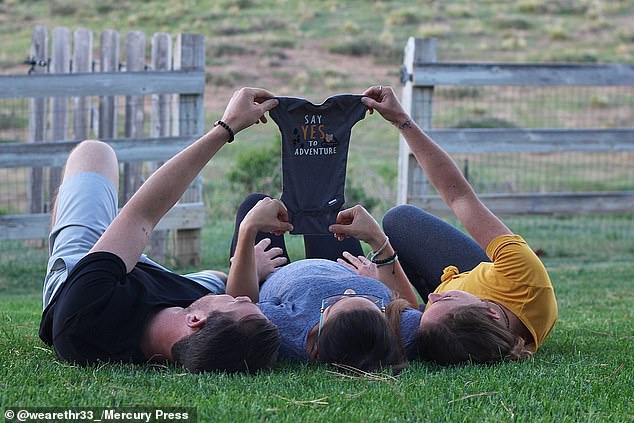 They revealed how many questioning how Mike can handle two women, or questioning if Jess feels left out as she is not also married to her partners.

Mike said: ‘People use the word girlfriend as a bit of a throwaway term of endearment so sometimes we have to spell it out for them and the look on their faces is priceless.

‘They might have never heard of a throuple before or they don’t understand how it could work because they couldn’t do something like this.

‘They usually go straight to the physical aspects when they start to ask questions but it’s such a deeper love than just that. 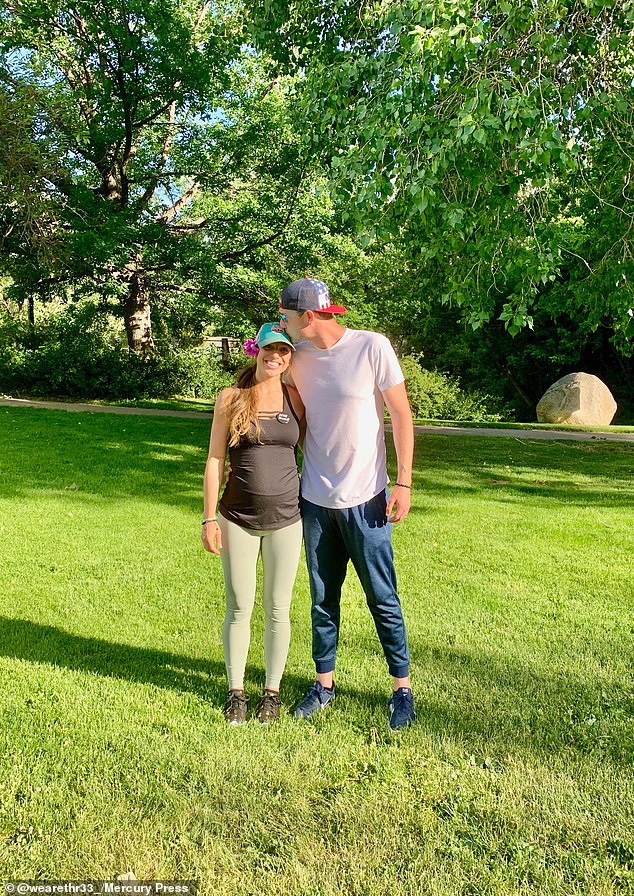 ‘I get to see two people that I love dearly, love each other, and that’s a difficult feeling to describe to someone else.’

Lo added: ‘Men usually do one of two things, they look at Mike and think he’s a god or that he has it made or they say I can’t even handle one woman, let alone two.’

Jess said: ‘Sometimes people ask if I feel like I’m less than them or worry because I don’t have a ring on my finger but I know that the two of them are planning an engagement, whether it happens now or in a few years it doesn’t matter, I know that I’m an equal part of this relationship.’