The Reserve Bank has kept interest rates on hold at 0.1 per cent at its March board meeting amid early signs of wages strength and inflationary pressures.

Official interest rates have been on hold since they were cut to record lows in November 2020 in the midst of the coronavirus pandemic. Economists expect rates to start rising gradually over the year. 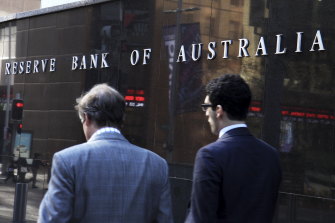 The RBA board met on Tuesday.Credit:Nicholas Rider

New property investor housing loans increased 6.1 per cent in January to a record high of $11 billion after 15 consecutive months of growth, Australian Bureau of Statistics data shows. Investor loan commitments increased 9.8 per cent in NSW and 11.1 per cent in Victoria.

However, CoreLogic data shows house prices in Sydney and Melbourne were flat in February. The rapid cooling of the housing market is in part due to rising mortgage rates, affordability pressures and the withdrawal of stimulus measures introduced to help keep the economy afloat during the pandemic.

ABS data on Tuesday showed the extent of debt being taken on by people going into the property market.

An $818 million drop in the size of Australia’s trade surplus will detract 0.2 percentage points from the national accounts while a fall in government capital spending will cut GDP by 0.1 percentage points.

There will also be no contribution from overall government expenditure in the quarter. In the September quarter, government spending added 0.8 percentage points to growth.