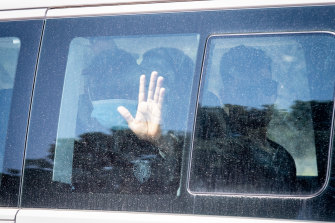 Mr Dutton’s reasoning is incontestably true. It is cheaper to have 65 refugees living in the community on six-month visas than it is to have them locked down for more than a year in hotels, under nightly curfew and with no day-release. But his explanation is also grotesquely misleading. Cheaper still would be to allow these refugees to become industrious, taxpaying members of our community, to have them lead healthy and stable lives in a nation that protects the rights of its own citizens. And cheaper again would be to release and repatriate all other detainees who have been deemed to be refugees and entitled to our protection.

Even more could be saved by extending compassion to the family of four Tamil asylum-seekers, two of whom were born in Australia, who lived for a while in Biloela, Queensland, but have spent almost three years in immigration detention and are now held on Christmas Island.

This government and previous Coalition and Labor governments have grappled with how to deal with asylum seekers who came here by boat. Thousands of men, women and children were bureaucratically branded “illegal maritime arrivals” because, simply, they sailed into our nearby seas seeking help without a visa. They have been peremptorily shipped to bleak islands in the western Pacific, mandatorily detained, treated as quasi-criminals, wickedly demonised, and left with little hope for a regular life.

Now Mr Dutton would have Australians believe that their detention, which has wasted so much of people’s productive lives, which has cost Australian taxpayers billions of dollars and blighted the nation’s reputation on human rights, has been undone by, of all things, a cost-benefit analysis. You can be sure there is more to it, but don’t expect a straight answer. After all, it was Prime Minister Scott Morrison who, as immigration minister, mastered the art of deflection and secrecy by deploying the term “on-water matters” as a way of barring information about border-control operations.

Refugees released this week from hotel detention and from the Melbourne Immigration Transit Accommodation centre in Broadmeadows came here in 2019 from Manus Island and Nauru for a range of urgent medical reasons, including severe deterioration of mental health. After the government repealed laws allowing medical evacuations, scores of refugees remained for more than a year in hotels in Melbourne and Brisbane.

The Australian Human Rights Commission’s latest review of detention facilities, released last month, found the hotel system was inappropriate and should only be used in exceptional circumstances for very short periods. It noted that significant risks flowed from detaining many people in confined facilities during a pandemic, and it recommended the government release refugees who did not pose a security risk. Although the government formally rejected this aspect of the commission’s 44 recommendations, Mr Dutton has now, suddenly, doubled back, offering cost as his only spurious justification.

Since December, people stuck in hotels have been at the centre of the national debate. First it was the dangers and difficulties of hotel quarantines, and the outbreaks that emerged, and now it’s elite tennis players whining about being “in prison”.

Through it all, and for the now almost eight years leading up to it, these refugees have been in various forms of detention at the hands of Australian governments. It’s time for that to end.

The Age’s editor, Gay Alcorn, writes an exclusive newsletter for subscribers on the week’s most important stories and issues. Sign up here to receive it every Friday.