The foods NO ONE wants in a crisis! Shoppers mock supermarket shelves fully-stocked with gluten-free bread, sprouts, pineapple pizza and Corona beer

While shoppers are busy panic-buying loo roll, pasta and rice, there are some seemingly unpopular items that remain fully stocked on supermarket shelves.

With the country on lockdown and Brits limited to essential shopping trips, it’s becoming increasingly clear what people’s priority products are.

Sprouts, vegan alternatives and pineapple pizza appear to rank low – while many also appear to have boycotted Corona beer.

And when it comes to snacks, bags of chocolate-covered pretzels lost out to their neighbouring mini Oreos.

Here FEMAIL takes a look at some of the most unwanted supermarket items in the UK and around the world, as highlighted by social media users. 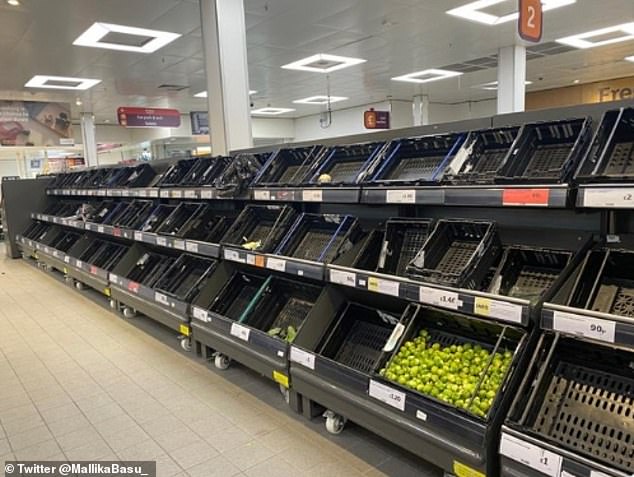 Twitter user Mallika Basu, from London, shared this image of the vegetable aisle in a branch of Sainsbury’s, captioning it: ‘Eat your sprouts, people’ 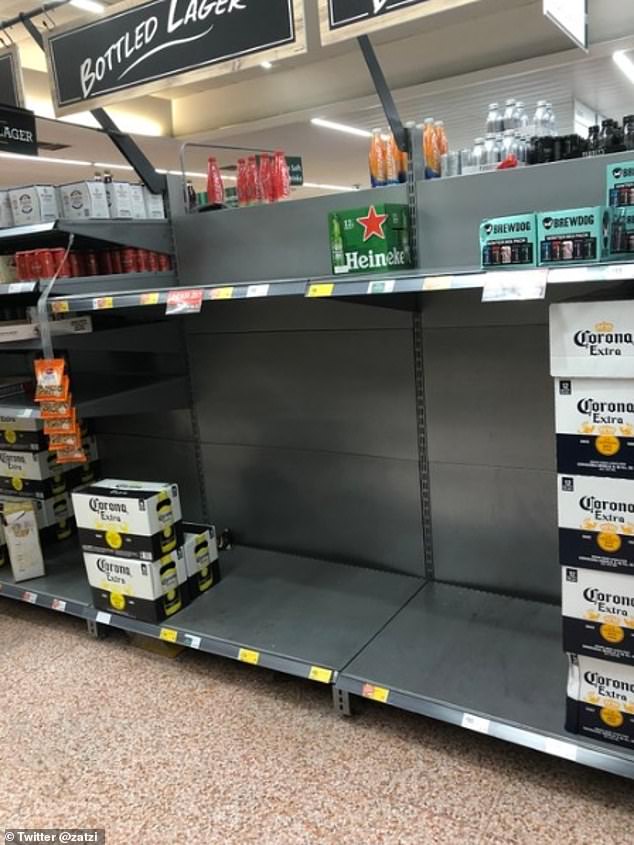 Annunziata Rees-Mogg, sister of Jacob Rees-Mogg, shared this photo of a supermarket booze aisle still stocked high with Corona beer, while other brands had sold out. She admitted she thought it was ‘fake news’ that people weren’t buying it amid the coronavirus pandemic

John O’Brien, of Scotland, said his country had spoken on the ‘should pineapple be on a pizza’ debate – sharing a photo of shelves stocked with Hawaiian pizzas while other flavours had gone 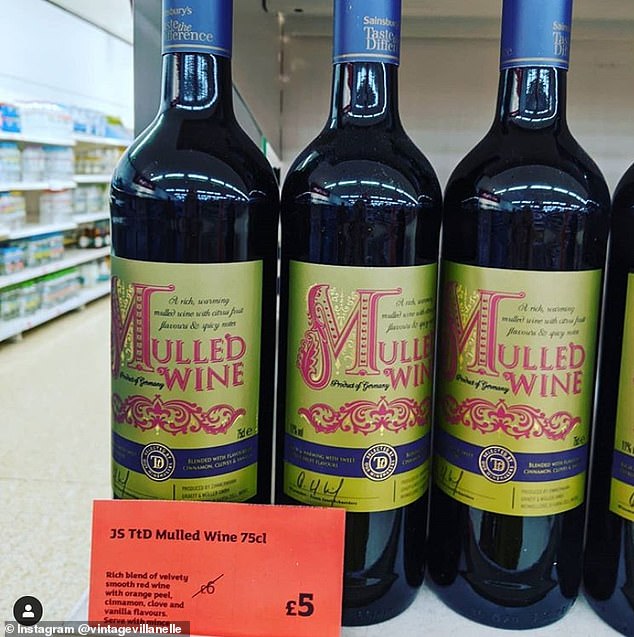 Instagram user LouLou, of south west England, shared this photo of the Sainsbury’s booze aisle stocked with festive mulled wine this week, captioning it: ‘In a concerted effort to keep our spirit’s up in these trying times Sainsbury’s suggest we drink bottles of Mulled wine as there is no wine or beer on the shelves so this was all they had in their stockroom, chin, chin’ 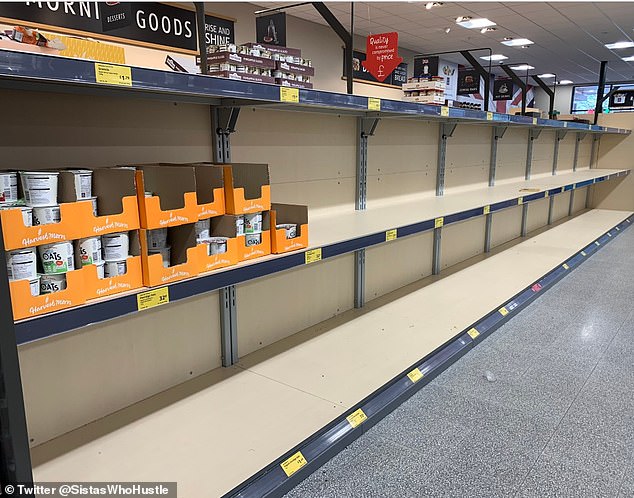 In the aisles of Aldi in Watford, Sylvia Johnstone shared this photo of bare shelves – save for a good supply of instant oats 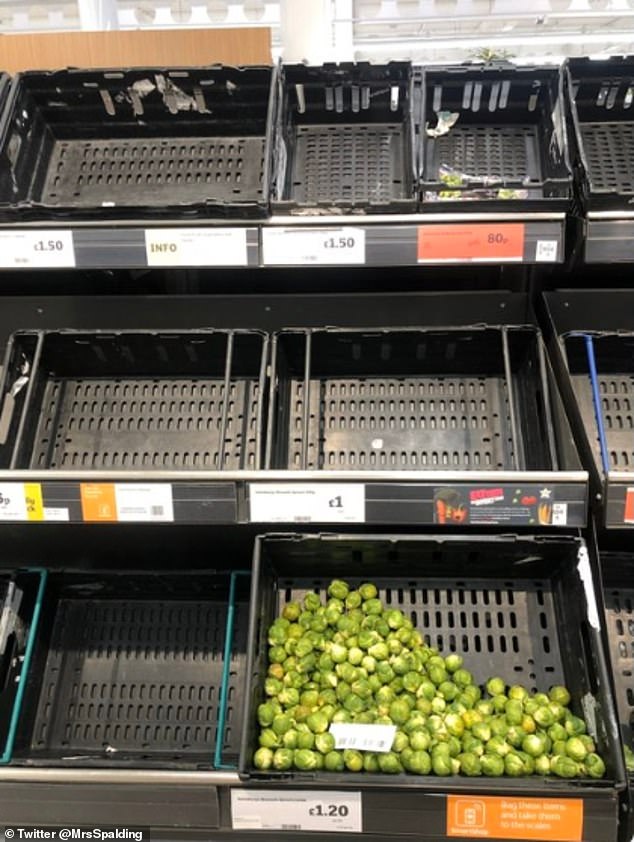 Assistant headteacher Caroline Spalding, from Derby, shared this photo of loose sprouts in her local Sainsbury’s, while other fresh veg had sold out 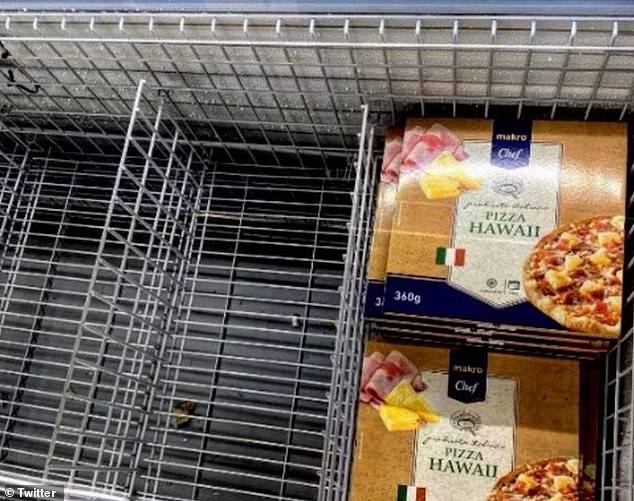 Another Twitter user from an undisclosed location also shared a photo of the frozen pizza aisle, where stacks of Hawaiians were still available 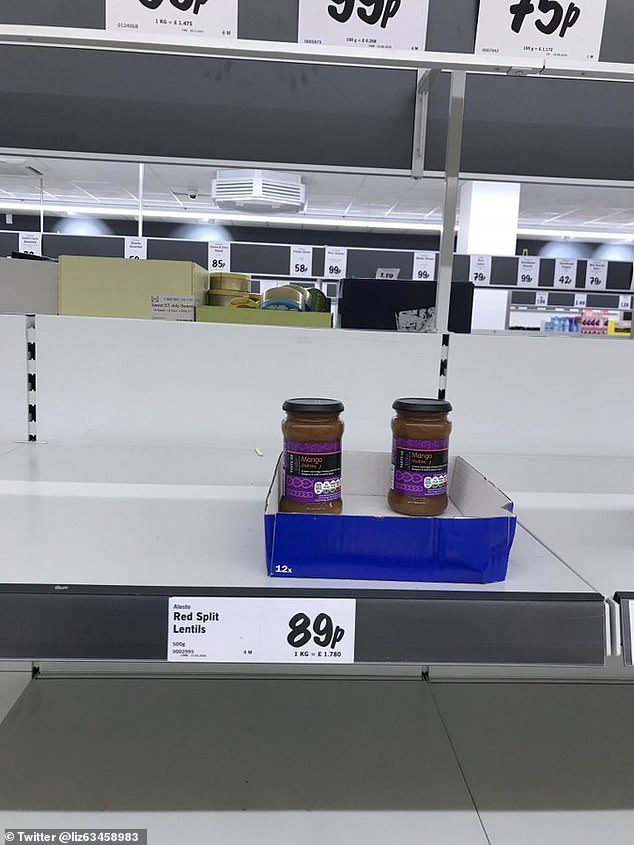 A Lidl shopper from Glasgow shared this photo of two lonely jars of mango chutney, remarking: ‘Feeling sad for the chutney tonight – the only food left at the supermarket, plus spinach and courgettes #unwantedfood’ 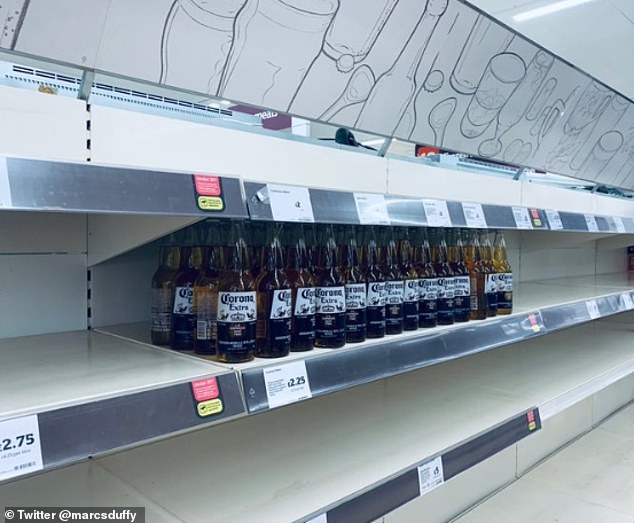 Bemused Tyneside resident Marc Duffy shared this photo of bare shelves in Sainsbury’s – though bottles of Corona beer were still in plentiful supply. He said it was the only beer left in the store 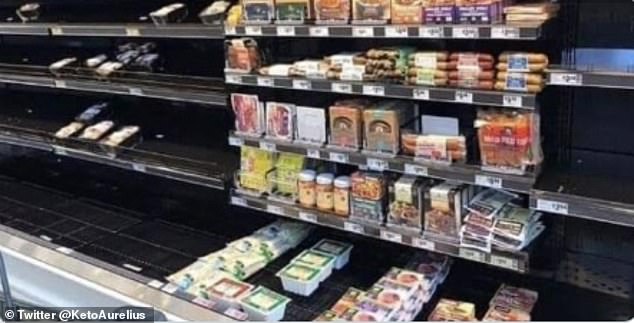 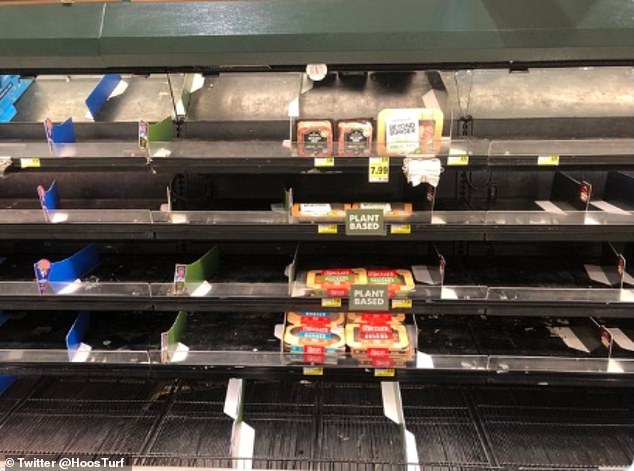 Jesse Pritchard, believed to be from Virginia, said his people have spoken – and they’d ‘rather starve before eating plant-based meals’ 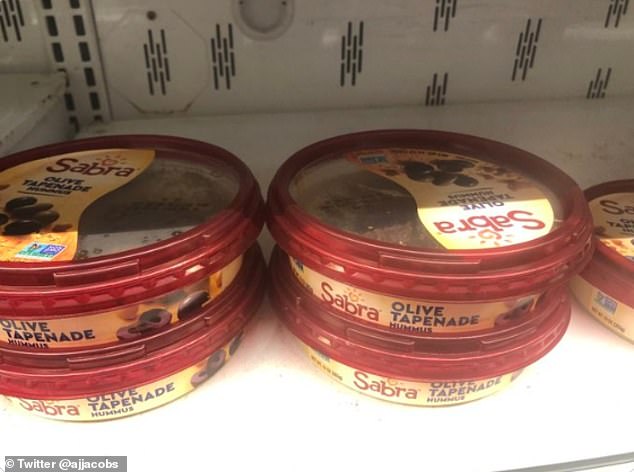 New York-based author shared this photo of olive tapenade flavoured homous, declaring a ‘moment of silence’ for the unwanted dip 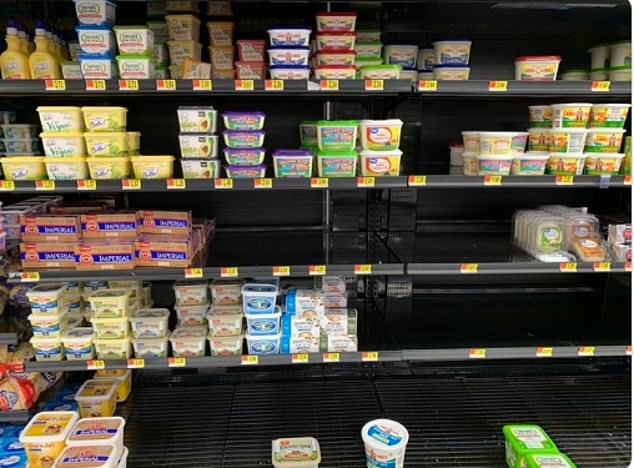 Manhatten-based Tony Stark took this snap to show how the vegan butter had been left behind, captioning it: ‘Maybe their new slogan should be, “I can’t believe it’s not selling” 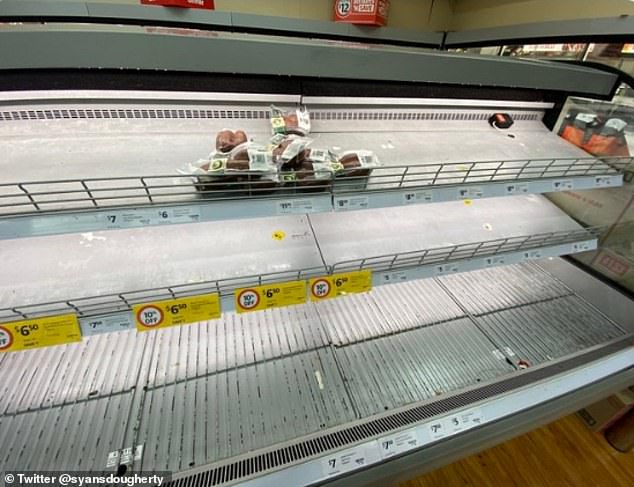 Syan Dougherty, of Perth, Australia, remarked that even during a global pandemic, no one wants black pudding 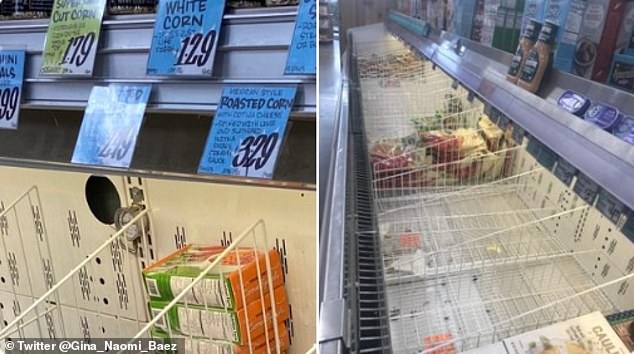 Gina Naomi Baez, from an undisclosed location, shared this photo of the frozen aisle at her local supermarket, pointing out no one wants carrot spirals and cauliflower crust in a pandemic 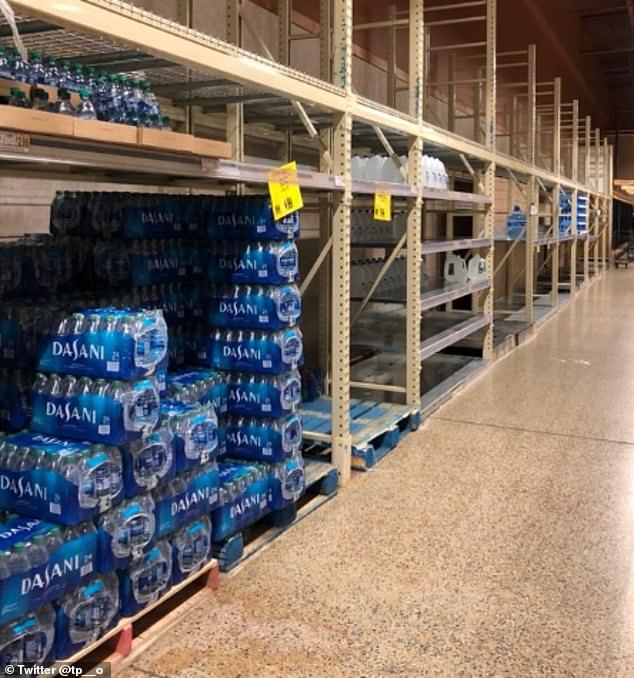 Teddy, from an undisclosed location, shared this photo of stacks of mineral water among empty shelves, claiming: ‘No one wants Dasani’ 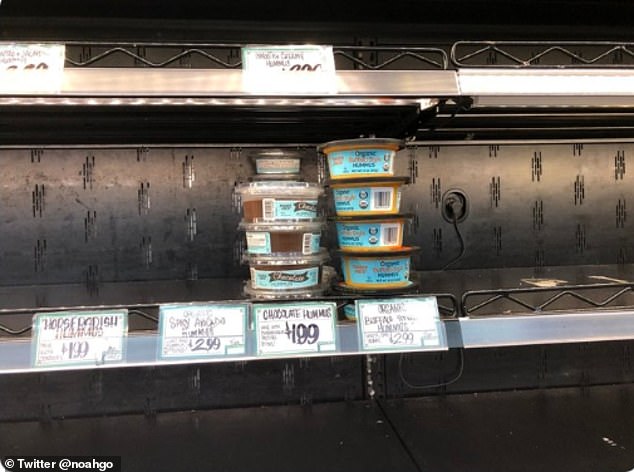 Twitter user Noah, from an undisclosed location, said it was ‘someone reassuring’ that people ‘still have the sense not to buy chocolate humous and buffalo humous’