TYSON FURY is unquestionably boxing's biggest character outside of the ring these days.

The Gypsy King has been leaving fans in stitches this week with videos of his lockdown workouts going wrong, with his chaotic home-life intervening. 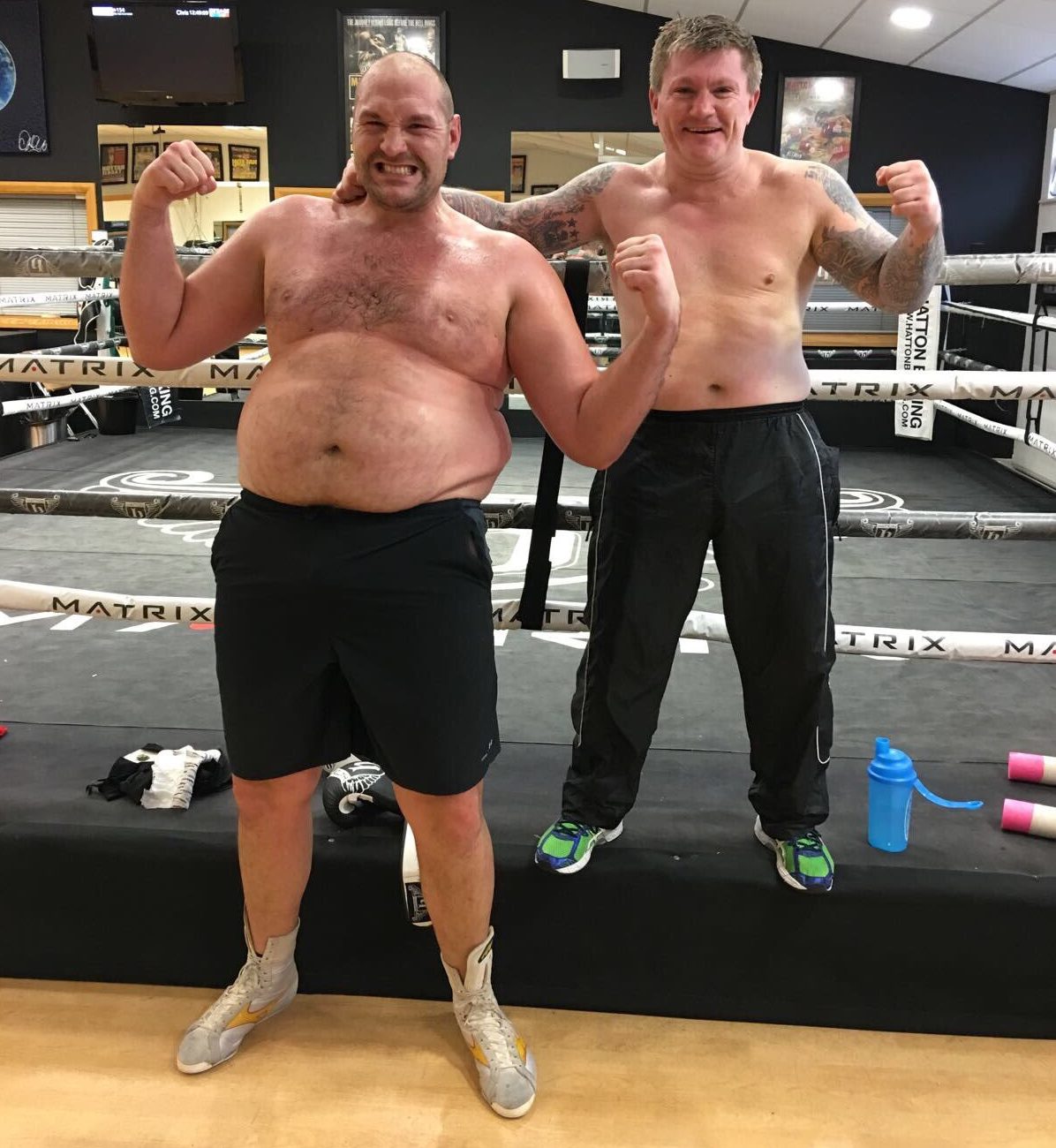 But challenging him for the people's champion of the world has to be Ricky Hatton.

As well as being a superstar in the ring, the former welterweight and light welterweight king was – and still is – a real entertainer out of it.

Hatton, 41, was back to his hilarious best on Thursday night when he posted a video himself on lockdown with an adult TV channel on in the background.

On the back of his latest stunt, we take a look back at some of Hitman's most hilarious moments from the past few years…

MANCHESTER CITY fan Hatton had fans in hysterics this week after posting a video of himself with an adult TV channel on in the background.

The footage showed a near-naked brunette on the screen behind him as the former boxer addressed the camera.

In his message to fans, he said: "Hi everyone. Ricky 'The Hitman' Hatton here.

"Been in isolation now for seven days now. And it really is hard work isn't it."

As Hatton slowly turned around to reveal his TV, he added: "But what you've got to do, you've got to keep positive and keep yourself busy.

"Find things to fill your time with, keep knuckling down to it and things will come out good. All the best everyone."

WE"VE all accidentally ordered the wrong thing in a restaurant or paid a few quid over the odds for something or other in our lives.

But Hatton took that to the extreme after racking up an astonishing £1,750 bill while out for dinner during a holiday to Mykonos last year.

The boxing legend accidentally paid £800 for a hunk of beef – Kobe rib-eye, no less.

On his bill, Hatton joked: "Just woke up this morning in a puddle of f***ing tears.

BREAST OF BOTH WORLDS 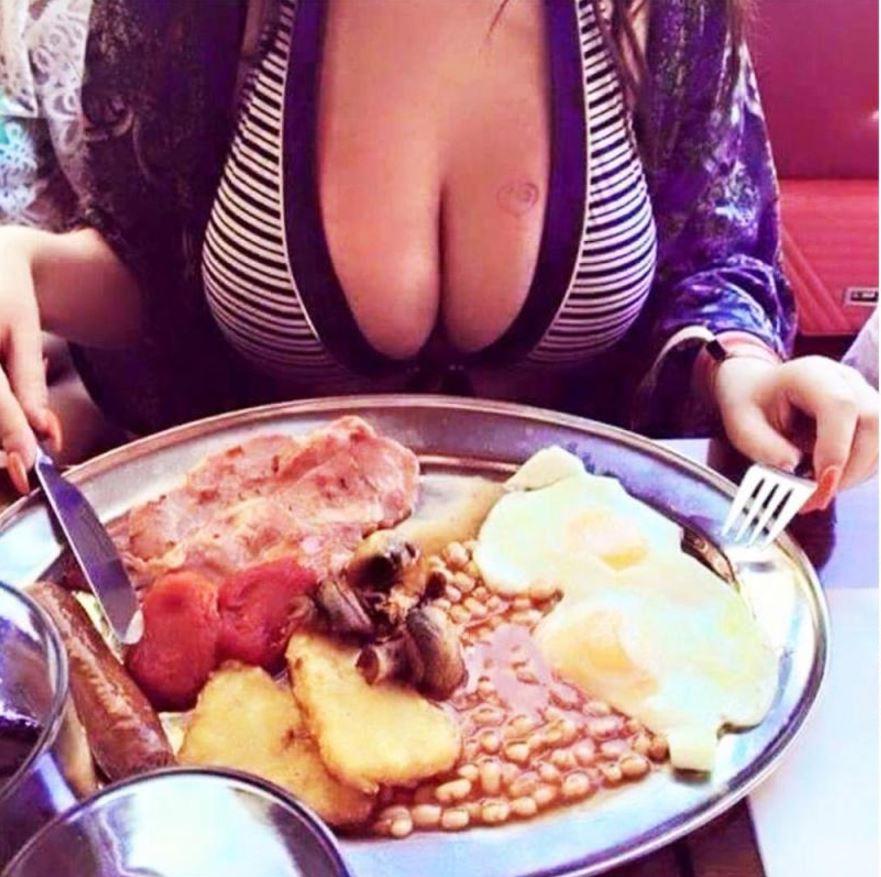 JUST what you need after a heavy night: bacon, eggs, beans, hash browns… and a huge pair of breasts, apparently.

In 2017, Hatton shared a snap of himself tucking into a full English, but it was his female company that stole the show.

Hatton captioned the post: "Last night wins for my two boys @ChrisBlaney12 @JakeHaigh and after that to top it off @ant-crolla won as well.

"Treat myself this morning to breakie."

The post left social media users in stitches, with one joking: "Can't take my eyes off that fry up, looks top notch." 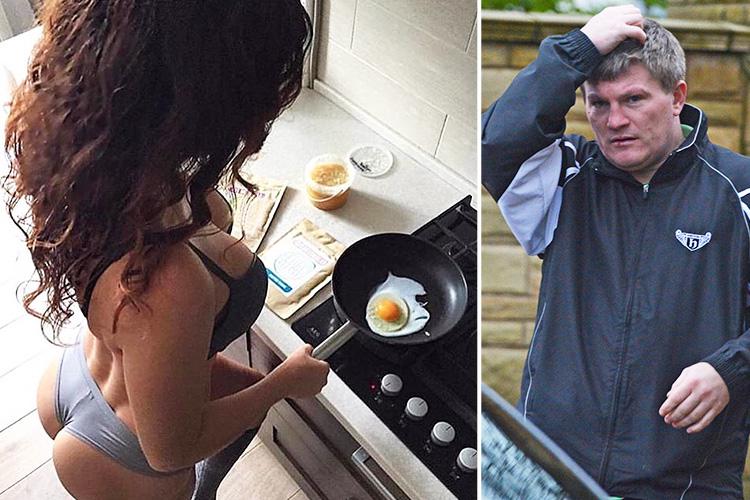 STICKING with the most-important meal of the day – and again in 2017 – Hatton uploaded an image showing a woman in a bra and knickers cooking an egg over a stove.

He captioned the post: "Some breakfast I woke up to this morning?"

But it was later revealed Hatton did NOT know the woman – and he'd lifted the image from social media after it was uploaded two years prior, in 2015. 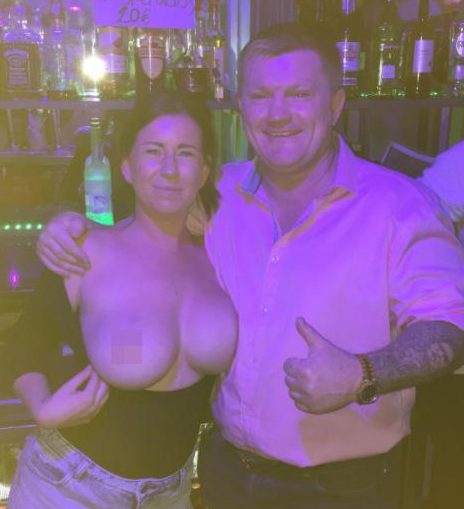 THERE'S certainly something of a theme developing here…

In 2017, again, the Brit took to Twitter to upload a snap of himself with a huge grin alongside a topless woman in a Magaluf bar.

Alongside the picture, where he has his thumbs up, was the simple caption: "Some t***s out in Magaluf."

THIS time it was Hatton's turn to whip his top off in Magaluf.

Last year, the former boxer charged across the famous strip topless to have a crack at the punching machine.

Despite the run-up and the gathering crowd, Hatton could only land an underwhelming right hook.

RICKY HATTON had a Valentine's Day to remember in 2019 – after being whipped while having a ball gag shoved in his mouth.

The former boxing world champion uploaded a video of the disturbing clip to his Instagram, before quickly deleting it – but not before others saved it.

Bent over a bed, Hatton is seen wearing a pair of Y-fronts, moaning as someone filming whips him on the backside.

Through his gag, he mumbles: "This is the best Valentine's Day present ever."

IN 2018, Hatton was partying at a Manchester hotspot – when he decided it would be a good idea to have a crack at the mechanical bull.

Unfortunately for him, he was thrown off and he attempted to style it out by doing the worm on the sticky nightclub floor.

But an onlooker revealed: "He was really drunk trying to do the worm on the floor.

"He kept going to ground to try and get in the position but couldn't stop falling around."

HATTON had fans in hysterics when he was handed the mic to to commentate on the final moments of Anthony Joshua's 11th-round stoppage of Wladimir Klitschko in 2018 while at a pub quiz.

But he got a little excited, with one sequence going: "Klitschko is looking tired here, Anthony is just waiting for one mistake.

"Go on Anthony, step in son, one more right hand will do it.

"Jump on him AJ. You've got him now, one more shot will do it! Stop wiping his f***ing gloves, ref! Come on, let him at him.

"[Klitschko] is staggering all over the show, he's like a mummified wardrobe.

"One more shot will do it. Put him in the corner now, keep the punches going, put him under, come on you're going to do it, yes, it's over!"

RICKY HATTON tried – and failed – to show off his muscle in a Manchester nightclub with a set of press-ups on a sofa in 2017.

After Hughie Fury's loss to Joseph Parker, Hatton fancied a late-night work-out by doing press-ups with his hands and feet propped up on the arms of a luxurious sofa.

But he dropped early on in the attempt and went face-first into the cushion.