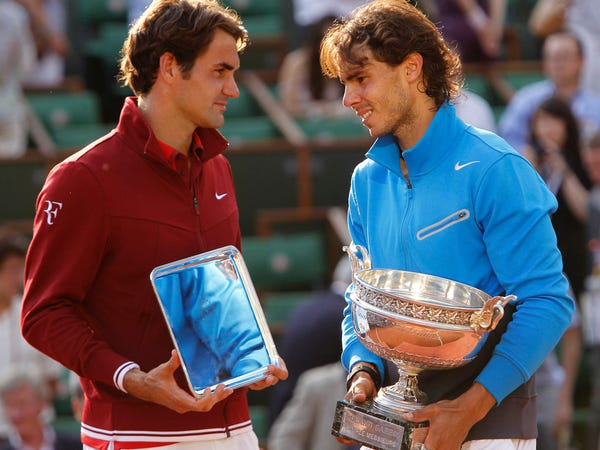 Roger Federer and Rafael Nadal have long battled at the top of the tennis world.

And now, at the twilight of their storied careers, the two legends are all tied up for the most Grand Slam championships in men's tennis history.

With his record 13th French Open victory on Sunday, Nadal joined the 39-year-old Swede atop the tennis throne, putting them both three titles ahead of Novak Djokovic with 20 titles apiece. And after the Spaniard completed the impressive feat — without losing a single set all tournament — Federer penned a heartfelt tribute to his "greatest rival" on Twitter.

"I have always had the utmost respect for my friend Rafa as a person and as a champion," Federer wrote. "As my greatest rival over many years, I believe we have pushed each other to become better players. Therefore, it is a true honor for me to congratulate him on his 20th Grand Slam victory."

Federer has not taken the court since losing to Djokovic in this year's Australian Open final. He went under the knife shortly thereafter to address a knee injury and later announced that he would not return to competition for the rest of the year.

Nadal, meanwhile, took a hiatus of his own after winning the Mexican Open in late February. Rather than competing at the US Open this summer, the 34-year-old opted to focus on the clay season. He lost to Diego Schwartzman in the Italian Open's quarterfinals before defending his title at Roland-Garros for the fourth consecutive year.

"It is especially amazing that he has now won Roland-Garros an incredible 13 times, which is one of the greatest achievements in sport," Federer wrote. "I also congratulate his team, because nobody can do this alone."

"I hope 20 is just another step on the continuing journey for both of us," he added. "Well done, Rafa. You deserve it."

During his postgame availability, Nadal thank his friend for the kind words and said that it "means a lot the positive relationship that we have together because we have been going through a great rivalry for a very, very long time."

"I think, as everybody knows, we have a very, very good relationship," Nadal said, per journalist Max Gao. We respect each other a lot. At the same time in some way I think he's happy when I'm winning and I'm happy when he's doing the things well."