Korean researchers have designed a lubricant-infused surface, intended to cover a ship’s hull, which is covered with tiny cavities.

As the cavities are continuously filled with the lubricant, a layer is formed over the surface that helps slip easily though the water.

Computer simulations showed the coating can cut ‘fluid friction’ by nearly a fifth, the experts say.

An X-ray image of a loach’s mucus storage system, and a schematic diagram demonstrating how lubricant is secreted in the authors’ setup

‘Our investigation of the hydrodynamics of a lubricant layer with a slippery surface in a basic configuration has provided significant insight into the benefits of a lubricant-infused surface,’ say the researchers in their paper.

‘Further research into mucus layers is expected to stimulate improvements in the energy-saving technology.’

Long-distance cargo ships lose propulsive power due to fluid friction, which is caused by the exposure of their large hull surfaces to seawater.

However, the hydrodynamics of lubricant-infused surfaces is ‘not yet fully understood’, the team say. 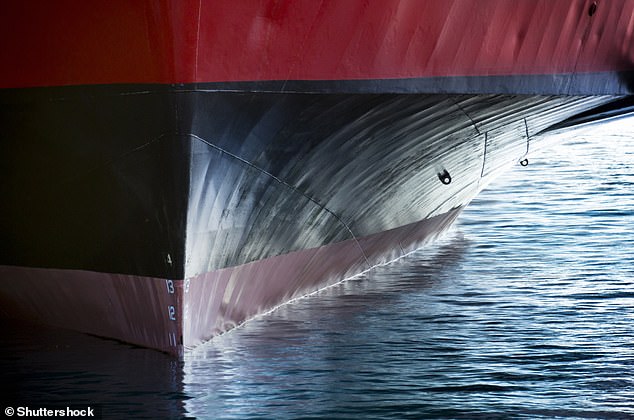 They then investigated how the size of the cavities in the special material and the thickness of their ‘lids’ affected the amount of drag on the vessel.

They found that for larger open areas, the lubricant spread more than it does with smaller open areas, leading to a more slippery surface.

Researchers believe a breakdown of the physics of different types of cavity will help implementation in real-life marine vehicles.

Because drag increases with speed, the faster the ship moves, the more fuel it requires to counteract the resulting resistance.

The physics behind the technique will therefore help save the planet by affecting how much fuel a ship needs.

It could help slash emissions of potentially harmful sulphur compounds and CO2 produced by exhausts that power propellers.

The study has been published in Physics of Fluids.

WHY ARE FISH AND SEAWEED SLIMY?

Fish secrete a type of mucus from their skin.

This slime coating is important because it provides protection against parasites and diseases, covers wounds to prevent infection and helps fish move through the water faster.

Some species release toxins in their slime which ward off attacking creatures while others use their slime to feed their young.

The mechanism of fish mucus drag reduction is one of the several adaptations to facilitate movement.

Seaweed also feels slimy to the touch because of a jelly-like layer on its surface.

This keeps the plants supple and prevents the seaweed from being damaged by the waves.