The search for two campers who went missing in Victoria's high country more than two weeks agai has been called off.

Russell Hill, 74, left his Drouin home in the state's east on March 19 to go on a camping trip across several sites along the Dargo River in Victoria's north-east. 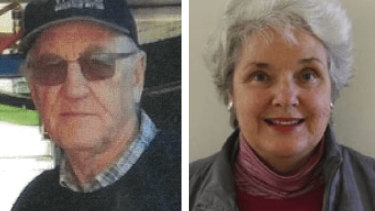 Russell Hill and Carol Clay have been missing for more than two weeks.

Carol Clay, 73, told friends she was heading away for a few days and expected to be home by March 29.

But they have not been heard from since March 20, when Mr Hill made radio contact from a remote station in the Alps.

Concern increased when Mr Hill's car was found with signs of minor fire damage near the Dry River Creek track at Billabong on March 27.

In a Facebook post, the Country Women's Association of Victoria Gippsland Hills group posted a tribute to Ms Clay, a former president of the branch.

"Gippsland Hills Group members are deeply saddened by the unsolved mystery of the disappearance of Carol Clay.

"Carol is very much loved, admired and respected for her warmth, dedication, and passion for CWA. We miss her so much," the post read.

"Carol's family has been informed that the search has been called off, the case remains open and two detectives are assigned to the case."

A week ago, Inspector Craig Gaffee said that Mr Hill was an "experienced camper" who had worked in the logging industry and knew the area well.

On all his other trips he was in daily contact with friends via radio, something Inspector Gaffee said had not happened this time.

Inspector Gaffee said the possibility the pair were using the camping trip to isolate from coronavirus was one of the "lines of inquiry" for police, but family expected Mr Hill and Ms Clay to return.

Victoria Police said while the active search had concluded, the Wellington Crime Investigation Unit will continue to investigate.