Professional football leagues are asking governments to save them. When the door is slammed in their faces, they might ask if that one extra weekend was worth it.

The NRL, AFL and A-League played on, in the genuine belief that they were doing good for the morale of their participants and fans, and for the financial security of their industry. It was a muscular community’s last great offensive, the brave Dothraki galloping out to smash the Night King only to be wiped out within a few seconds. 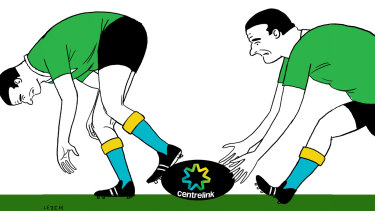 Now for the cost. Whatever last payday they were hoping to squeeze out of their broadcasters, they lost infinitely more in community goodwill. For the NRL, the bill has come in for all those years of reputational damage done by reckless and stupid individuals. They might comprise only a minority, yet for millions of disengaged Australians, to be asked to pay taxes to keep a dopey sex-fiend man-child on $500,000 can only produce the grim smile of schadenfreude. The end of bloated salaries for footballers? For most of the population, COVID-19 needs to have some upside.

Should government be funding professional sports anyway? The major Australian football, cricket, netball and tennis bodies are represented by the Coalition of Major Professional and Participation Sports, or COMPPS, in the effort to get forward from the back of the queue at government’s door. There is an overriding national health interest in supporting the second ‘P’, the 16,000 amateur clubs that COMPPS represents. It won’t be too long, fingers crossed, before school and community sport recommence. 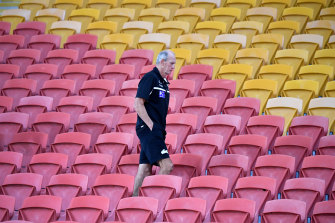 But for the other ‘P’ – Professional – it’s a different story. Does sustaining pro team sports at their current wealth matter so much that the public purse (presuming it was a financial Magic Pudding, which currently it is only pretending to be) should save them? Try persuading the general public, which will be repaying the debt from this crisis for decades, that they should also be helping the NRL to get back to $13-million-a-year grants to 16 football teams.

The NRL’s obstinacy was not only harmful to its reputation but, like all too many of its employees, it was redundant. Whether the competition got to round two, round three or round five, didn’t matter. Even if it reached its next cheque from its broadcasters, this would only have been a drop in the bucket. In its current form, the era of professional football in Australia is over.

If anyone is thinking that Australian full-time professional competitions as we know them will return in the same shape after a "hiatus", as if this is all just an unscheduled off-season, reality will wake them up.

What is best in sport resides in people, not money. And that’s just as well, because while the money’s about to evaporate, the people will kick on.

While the league’s stated priority was to save their sport, theirs is just one version of rugby league: the recently invented, fully-professional industry circa 2020 that we should not be deceived into thinking is the natural way of things. Rugby league doesn’t have to be this version. It can in many ways be better – not richer, but better. The next few months will be the time to take stock and consider how austerity can bring improvement.

The first need is for historical perspective. Professional, glamorous, highly paid team sports in Australia might seem to be part of the permanent landscape, but they’re not. They are recent inventions, accidental outcomes of revolutionary changes in media. There was no full-time Australian professional cricket until Kerry Packer had a vision to release the game’s locked-up wealth for television 43 years ago.

The football codes turned fully professional only after the pay-television explosion 25 years ago. Even tennis, a sport almost perfectly designed for the concentration of wealth, has only been professional for 50 years. Full-time professionalism in team sport was not a necessary state of being; it might have been a momentary spike. 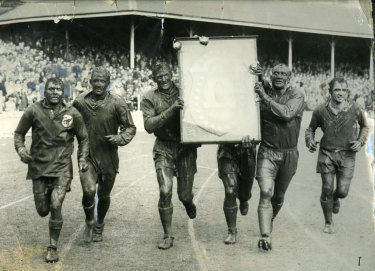 Possibly, for Australia’s rugby codes, that moment was already passing, and the coronavirus just hastened it towards its conclusion. Players and staff should be counselled to accept that this is not a matter of temporary pay cuts and holding the breath until the rivers of broadcast gold resume their gushing course.

International markets, one of the inflationary pressures behind pro sporting economies, have dissolved. You had to pay a union or league player $1 million a year because if you didn’t, he would go to Japan or Europe. Due to the global nature of this crisis, that pressure will be alleviated. Cricket Australia needing to pay a player $2 million a year to stave off the temptation of the international Twenty20 circuit? The wider cricket world is facing a humanitarian crisis of unimaginable proportions, beneath which the survival or otherwise of T20 leagues is a footnote. 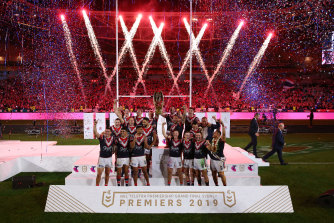 Sport in Australia has not always been about glitz and glamour.Credit:Getty

What will our domestic team sports look like when they start again? During off-seasons, Fox Sports shows a lot of old stuff: cricket from the 1980s, footy going back to the 1960s, pro-am games played by part-timers with real jobs. The level of athleticism and the size of the individuals is no match for the professional era, but the raw talent, the competitive passion, the suspense of the contest, and the ability to inspire fans to tell stories and to ignite children to go out and play are fixed human quantities.

In giving us flashbacks to the past, Fox Sports might be giving us a view of the future. And really, pro-am sport is not bad. At its best, it’s great. As the rugby union community has already found with its rediscovery of school and suburban competition, what is best in sport does not depend on full-time, high-performance professionalism.

The reduced circumstances of the future offer plenty of blue sky, if we’re prepared to look up. Our spectator sports will be funded by those of us who will buy club memberships and game-day tickets and will still pay to see it on our screens. They will be reduced in scale.

Tom Trbojevic won’t get his million bucks a year, but he’ll still be a superstar on $200,000 (and if he’s bought an investment property with his pay rise, he will, like any other citizen, simply have to deal with it). Football clubs won’t have dozens of full-time staff on six-figure salaries. They’ll still get unstinting service from volunteers doing it out of love.

Outrageous wealth in sport wasn’t a permanent state, it was a moment in time. What is best in sport resides in people, not money. And that’s just as well, because while the money’s about to evaporate, the people will kick on.