Inside the nation made for party lovers: Extraordinary story of island built on a platform off the Italian coast with its own post office and currency is brought to life in Netflix film starring The Undoing’s Matilda De Angelis

The extraordinary true story of an engineer who ‘built his own nation’ on a 4,000 sqft platform off the coast of Italy in 1968 is told in a new Netflix drama.

In the late 1960s, Giorgio Rosa, an Italian engineer, created an island in the Adriatic sea, which had its own government and currency as well as a restaurant, bar, souvenir shop and even a post office.

The Republic of Rose Island became a haven for party-loving students who travelled by boat from across Europe and home to Rosa.

The island was a symbol of freedom and attracted like-minded people looking to escape the confines of traditional society but only existed for two months in 1968 before it was occupied by Italian police forces. It was demolished a year later 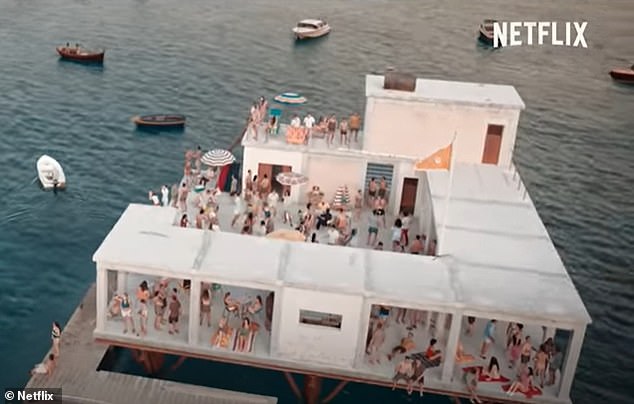 The extraordinary true story of Giorgio Rosa, an engineer who ‘built’ his ‘own nation’ on a 400 square foot platform off the coast of Italy in 1967, is to be told in a new Netflix drama 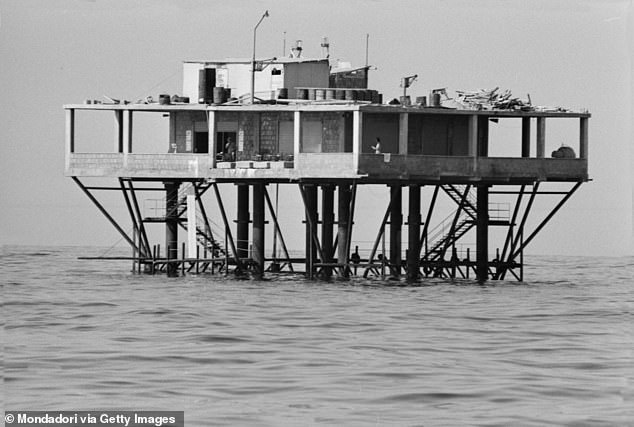 Giorgio had intended to continue building on the island each season, ultimately creating a five storied structure 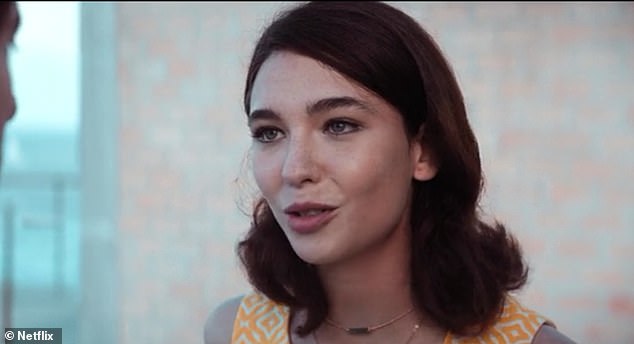 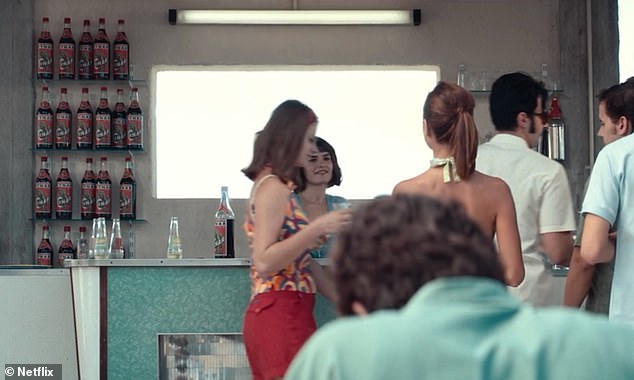 To earn money for the upkeep of the island, Giorgio and his group set up a bar. In the film, the group hire a pregnant teenager to serve as the bartender (pictured), explaining she would have struggled to secure a job on the conservative mainland

The film shows how Rosa took the island from concept to completion, slowly adding elements to make his platform habitable. The project attracted widespread media attention, first in Italy and then around the world. One scene shows a pile of citizenship applications from strangers desperate to move to the republic.

Speaking to the BBC, Rose Island’s producer Matteo Rovere said it was a ‘very famous story’ in the local Italian area of Rimini, adding: ‘It’s the sort of tale in Rimini that grandparents tell their children and grandchildren.’

In 1967, Giorgio set out to build a micro-nation as a symbol of freedom, designing and financing the construction of the 4000sqft platform 7.5miles off the coast of Rimini, in the Adriatric sea.

He created the complex structure, which was suspended 85ft above the seabed with steel pylons, along with four friends and a group of workers in just six months.

Due to the location of the structure, it was just beyond the control of Italian authorities. 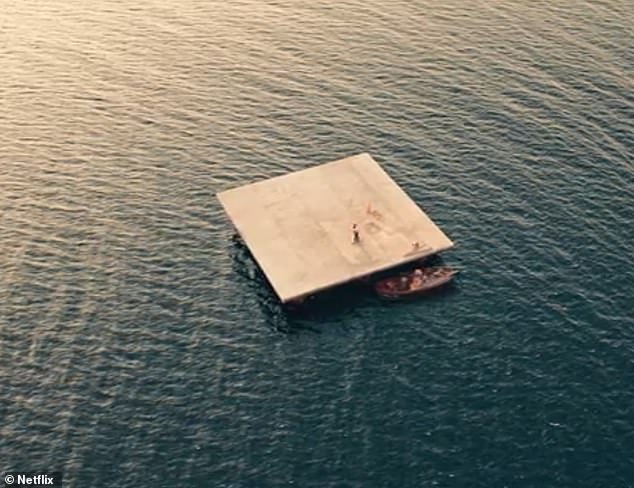 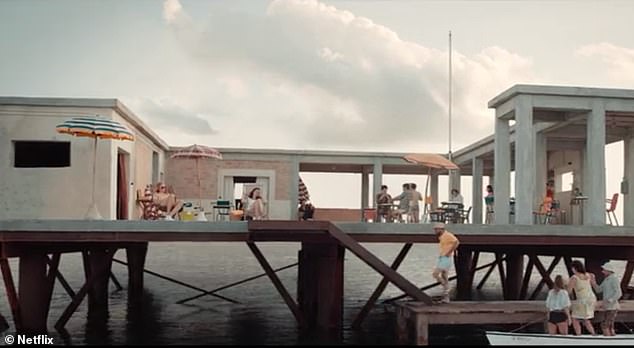 The island had its own bar and restaurant, as well as sleeping areas for a handful of people. Pictured, people arriving at the island in the Netflix film 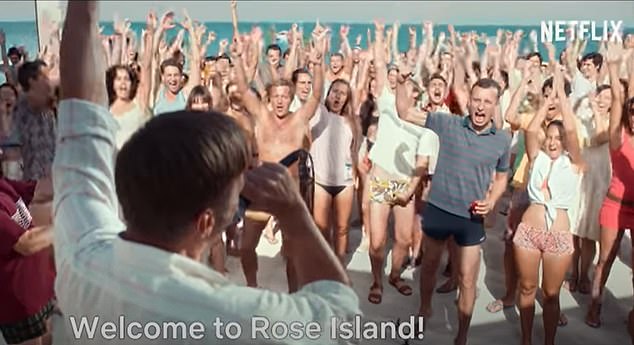 Young people flocked to Rose Island after it declared independence in 1968, with the structure having its own nightclub and restaurant. Pictured, in the Netflix series

Upon completion of the island, Rosa declared the islands independence on 24 June 1968, making himself president and calling it the Republic of Rose Island.

The platform quickly attracted the attention of the media, with many people flocking to the island for fun and freedom.

The island had three functioning toilets, with Rosa’s original intention to continue to gradually add more storeys to Rose Island over the years.

Rovere confirmed: ‘They thought the island should be not only one floor, but five floors.

‘The structure was very strong, and the idea was to build one extra floor each season.’

However, it was never formally recognised as a sovereign state by any country of the world. 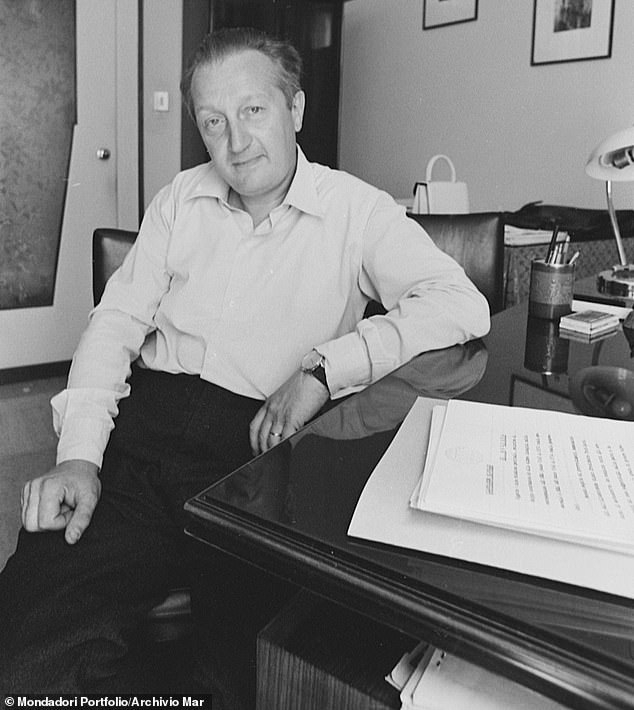 In 1967, Giorgio set out to build a micro-nation as a symbol of freedom, designing and financing the construction of the 400 s q m platform 12km off the coast of Rimini 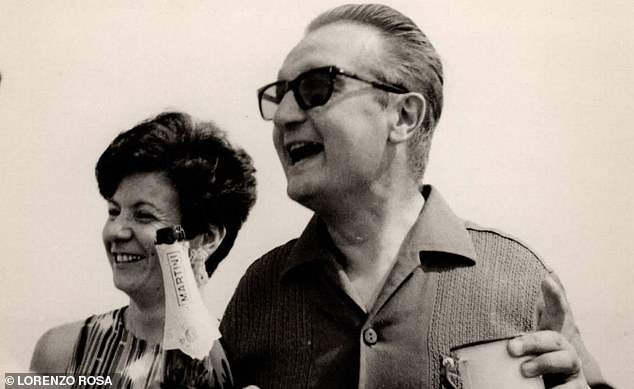 The island attracted the attention of young people from across the country, with many flocking to the structure to party with Giorgio Rosa

The engineer, who will be portrayed by Elio Germano in the upcoming Netflix drama, spent six months building the construction alongside four friends and a small team of works

Authorities and politicians were aghast at the build, with some claiming the structure was being used for drinking and gambling.

Others suggested it posed a threat to national security.

The Italian government saw it as a Rosa’s ploy to raise money from tourists while avoiding national taxation.

After 55 days, it was occupied by the Italian police forces on June 26, 1968, subject to naval blockade, and eventually demolished using dynamite on February 1969.

One death was counted but never confirmed. Rosa’s dog was reportedly on the platform during the facility’s detonation.

The event became a landmark in the country’s history as it is the only nation to be directly attacked by the Italian Republic and it helped pass a new mandate of extending the international waters territory from 6 to 12 nautical miles. 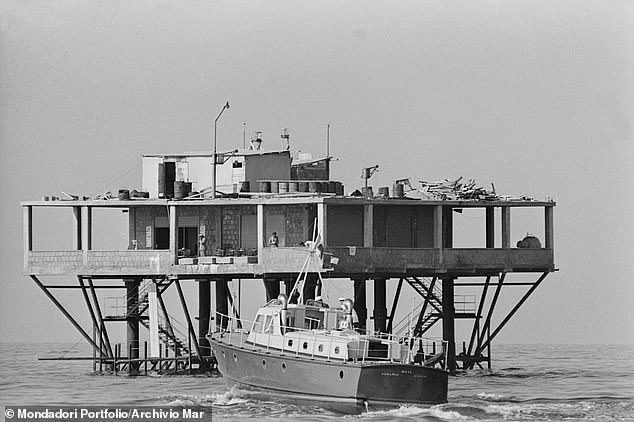 The island was destroyed in February 2019, with authorities blowing it up with dynamite, before a storm swept away the last of its remains

Authorities accused Rosa of trying to make money from tourists without paying taxes, and invaded the island after 55 days in 1968

According to his son, Rosa was left so devastated by the destruction of the island that he ‘never spoke’ of it again.

But before his death in 2017, Rosa met with film-makers and gave his blessing for the story of his island to be adapted.

The drama, which has English subtitles, depicts the construction of the island, and Rosa’s refusal to give in to the Italian government’s demands that it be dismantled.

It also follows his battle with the Italian authorities, with Rosa insisting he had not broken any laws by building the island, and there was no reason it should be destroyed.

Rovere said the story was one ‘about freedom’, with Rosa following the law in the 60s which said ‘if you were more than six miles from the coast, it’s nobody’s land.’

The filmmakers reconstructed the island in an infinity pool in Malta, but called the complex construction ‘a nightmare’.

The prolific Italian actor Elio Germano stars as Rosa, while his love interest is portrayed by Matilda De Angelis, who recently played Elena in The Undoing.

The 25-year-old Italian actress, who grew up in a rural town on the outskirts of Bologna, captivated audiences with her ‘exquisite performance’ and ‘menacing beauty’ as the murdered mistress, in what is being hailed as one of the ‘biggest breakthrough roles in recent years’.

The role required Matilda, who has no formal acting training, to appear naked, share a sex scene with Grant, 60, and initiate a kiss with Kidman, 53, in a penthouse elevator.

Her bloodied face also appeared in haunting flashbacks throughout the six-part series as viewers waited to discover who was responsible for her violent death.