The Swifts gave Paige Hadley the perfect birthday present, securing a 61-54 win over the Lightning on Wednesday night to take them temporarily to the top of the ladder.

The defending premiers celebrated their star's 28th birthday in style, dominating a side that is shaping up as one of their biggest challengers for the 2020 title. 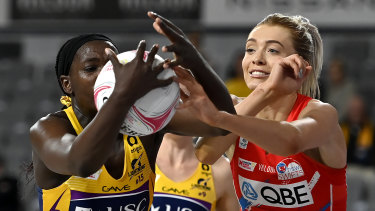 This season the Lightning have shown their aversion of the game's controversial rule, taking two wins without lining up a single super shot.

The move proved detrimental to their game on Wednesday night, with the squad unable to keep up with the power of Helen Housby and Sam Wallace in the super shot zone.

The Swifts have won just one first quarter this season and were once again unable to dominate early, with scores tied up 16-16 at the first break.

With a super shot on the buzzer from Sam Wallace, the Swifts managed to push their way back into the game, with the half-time score 32-29 to the Lightning.

Heading into the final 15 minutes, the Swifts managed to turn the game in their favour 44-43.

The match-up of Lightning shooter Cara Koenen and Swifts defender Sarah Klau was fierce, as expected, while Maddy Proud had one of her best games of 2020.

Lightning captain Laura Langman was electric in her first domestic game back since announcing her retirement from the Silver Ferns. Langman, who is New Zealand's most capped netballer, announced she would be retiring from international netball on Monday.

Lightning fans will be desperate to see the 34-year-old stick around the Sunshine Coast for many years to come after her performance on Wednesday, with the skipper proving too skilful for the Swifts across the entire 60 minutes.

The Swifts face the Vixens – who have been around the top of the ladder all season – on Saturday in round eight.