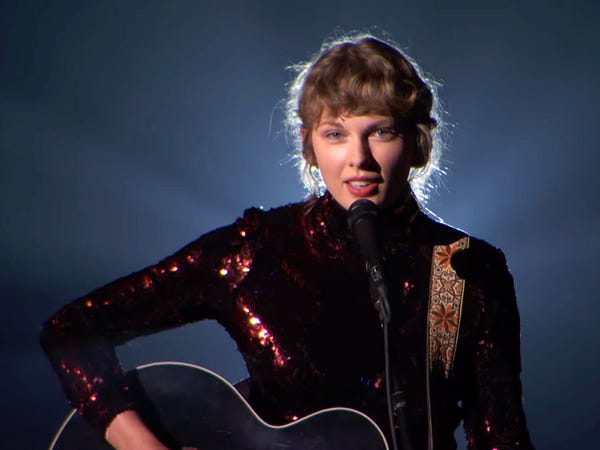 Taylor Swift made her return to the Academy of Country Music Awards on Wednesday to perform her song "Betty" from the Grand Ole Opry in Nashville, Tennessee.

Swift, who last performed at the ACM Awards seven years ago, arrived to the event wearing Stella McCartney from top to bottom. She donned a turtleneck covered in maroon sequins, khaki pants with short, pink stripes down each shin, and strappy, black kitten heels with gold chains around each ankle.

The pieces are currently unavailable to purchase, and it's unclear if Swift's ensemble was custom-made for her. Representatives for Stella McCartney did not immediately respond to Insider's request for comment when asked for further information about her outfit.

As People reported, Swift is said to have done her own hair and makeup for the performance. She wore a curly bun with bangs, and minimal makeup that included rosy cheeks and peach-colored lipstick.

The singer's beauty look was almost identical to her style in her "Cardigan" music video, for which she also did her own hair and makeup to comply with social-distancing measures.

The music video for “cardigan” will premiere tonight, which I wrote/directed. A million thank you’s to my brilliant, bad ass video team – cinematographer Rodrigo Prieto, producer Jil Hardin, executive producer Rebecca Skinner, AD Joe ‘Oz’ Osbourne, editor Chancler Haynes, special effects wizards David Lebensfeld & Grant Miller, and set designer Ethan Tobman. The entire shoot was overseen by a medical inspector, everyone wore masks, stayed away from each other, and I even did my own hair, makeup, and styling 😂

In 2014, she walked the red carpet in a two-piece set designed by J. Mendel. Her white crop top had two small cutouts across each shoulder, and her black, floor-length skirt had a thigh-high slit. Swift completed the look with black sandals, dangling earrings, a gold bangle, and curled hair that sat just above her shoulders.

One year later, Swift accepted the 50th Anniversary Milestone Award from her mom while wearing a blue, sleeveless gown with cutouts at the waist. The dress, designed by Reem Acra, also had a thigh-high slit.

She paired the look with platform heels, silver rings, hoop earrings, and a sleek updo.

You can watch a recording of Taylor Swift's 2020 ACM Awards performance here.

Related posts:
TV and Movies
Drew Barrymore Faceplants Into Poop In Her First Comedy Film In 5 Years — Watch Trailer For ‘The Stand-In’
Maya and Ethan Hawke to Star in ‘Revolver,’ Multi-Agency Sale to Launch at AFM (EXCLUSIVE)
Dave Bautista, Director Brad Peyton Team on Sci-Fi Thriller ‘Universe’s Most Wanted’
‘Inner City Symphony’ Writer Bobby Smith Jr Signs With The Cartel
Recent Posts
This website uses cookies to improve your user experience and to provide you with advertisements that are relevant to your interests. By continuing to browse the site you are agreeing to our use of cookies.Ok