It started out as a bit of fun, two unbeaten heavyweight champions in the ultimate fantasy fight at a time when the heavyweight division’s best boxer was in exile, and the top contenders were biffing and bashing each other in virtual obscurity.

A smart, sharp advertising ducker and diver called Murray Woroner decided to find a super computer and put in all the data for the best 16 heavyweights in history. This was a glorious mash-up of Fifties science fiction with enough Sixties farce to make it a psychedelic success.

Woroner used height, record, weight, reach, hand, calf and a dozen other ridiculous measures of a fighter’s raw facts; it was an understandable comedy and Muhammad Ali was beaten by a man called Jim Jeffries and a Hollywood party boy called Max Baer beat Jack Johnson. The winner was Rocky Marciano – no shock there – retired since 1955, still adored and idolised by the American public.

Sharing the full story, not just the headlines

Ali’s lawyers were going to sue and there was a burst of publicity. Heck, they had taken the man’s title, taken away his living, taken away his greatness and then Big Jim, an old-school racist, had whupped him and Rocky, who had cast a shadow of doubt over Ali’s career, had once again stolen the limelight and walked away with all the glory. It was too much, it was a sporting criminal act.

The solution was simple: fight! 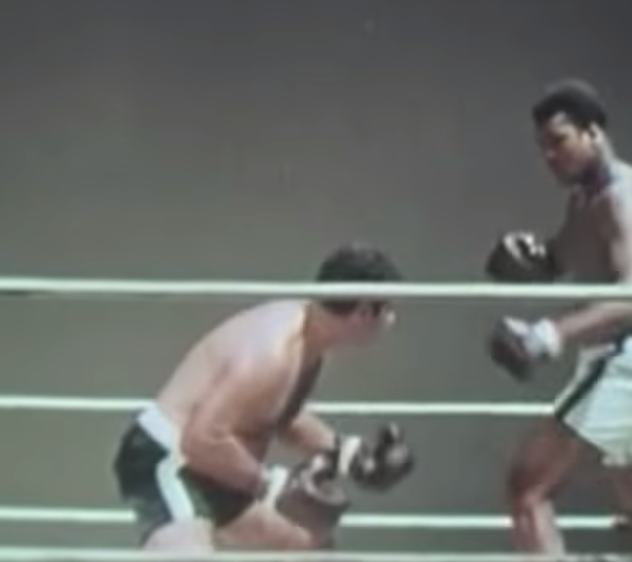 Marciano and Ali had a press conference in the early part of the summer of 1969 to launch their fight. It was civil and Marciano pulled Ali’s wife, Belinda, over at the end and advised her in private to tell him to give up his quest to be the heavyweight champion again. “Tell him to stop torturing himself,” he said. She replied: “He won it in the ring, and he’ll lose it in the ring.” It was an odd tender moment, a heartfelt message from the retired icon. Ali and Marciano liked each other.

“I saw Clay fight and he is probably the fasted heavyweight of all time,” said Marciano, still favouring the Clay name over Ali. “I will fight him the same way I fight everybody else. I will get low, get him in a corner and stay in close.”

“No man in the history of boxing or now can corner me,” replied Ali. “That is a big gamble. It’s science fiction talk.”

They shook hands and the fight was on.

Nobody cared about Joe Frazier defending Ali’s old heavyweight title in Houston against a man called Dave Zyglewicz. That fight ended in one round, just 96 seconds – Zyglewicz had started to box after answering an advert in a paper seeking “young boxers”. It was an odd boxing landscape back then.

Marciano went back to the gym, locked the door, lost fifty pounds and had a super toupee made. He was 45 and had not been in the ring since 1955. Ali also went back to the gym, got in shape and perhaps dyed his hair for the first time. He was 27, had not fought for over two years and he suddenly looked a lot older. The kid was gone, lost in the government-imposed exile. The fighting martyr was paying a price, make no mistake.

Woroner designed a fight, found a studio and for three days they went behind closed doors and fought. It was not a “computer” fight, it was a fight. They fought 75 one-minute rounds, shirts off, new shorts on, gum shields in, boots on. Marciano was Ali’s shortest opponent and Ali was Marciano’s tallest opponent. They were both undefeated at that point: Rocky was 49-0 and Ali was 29-0. The red sauce was everywhere, fake blood all over the place. The cameras rolled, the carnival was in town. It was a glorious spectacle.

There are parts of the fight that are impressive, the movement from both with Marciano cutting the ring down and Ali slipping and landing jabs. There is action, one up from a dance and one down from a hard spar – the toupee never moved and Ali clipped the offending hairpiece several times. It is a lot better than it should have been – Marciano is really trying, gritting his teeth and Ali is having to work hard at times; they pull their punches, but there are moments when they are in good positions. It is not the comedy fight that many expected and it resembles a high-quality technical spar. The ketchup helps keep it funny, forget their smiles.

Woroner filmed so many different endings; both win by stoppage or cuts and on points. The fighters and their entourages had no idea how it would end, no idea what the director’s final cut would be. It was a deep mystery. They finished the fight sequences and Woroner then talked about ingesting the fight into a super-super computer to get the result. But then Marciano died in a plane crash in the summer of 1969. He would never know the result. His family spoke in confidence to Woroner, mindful of Rocky’s reputation. Thankfully, there was not a rush to screen the film during the Marciano mourning moment and it was not released until 1970.

And this is where it gets a little crazy.

In the American version, screened in January of 1970, Marciano knocks out Ali in round 13. They filmed several knockout rounds. However, there was a problem with that ending in Britain and when 11 million people sat down to watch the fight on the BBC there was a different ending. Ali wins on cuts, the sauce was not wasted, the hairpiece was not ruffled – well, we never saw it being swept clean off Rocky’s head and that is a blessing.

There is an odd footnote and it is claimed that the fight inspired a young actor and screenwriter called Sylvester Stallone – hey, that’s what he said! Stallone watched it, loved the juxtaposition of styles, ages and it set in motion an idea. The Chuck Wepner and Ali fight, which is generally credited with being Stallone’s source for his movie, came after. Damn, he might just be right: The real Rocky does move and look at times like Wepner, the cinema Rocky.

The 1969 “computer” fight is still better than all of the virtual garbage, the fantasy fights – currently replacing the real fights – that are circulating. The Ali and Marciano fight should be a comedy, but in all its grainy beauty there is a strange dignity and that might just be the oddest thing about it.