It’s been a bumpy ride for the zinnia. Like dahlias and red hot pokers, the flower’s popularity has waxed and waned since its mid-20th-century heyday. But peruse any nursery catalogue and you will see we are entering an up phase.

There are glossy pictures of zinnias in Day-Glo colours and with acid-lime streaks. There are massive double pompoms, shaggy “cactus” spikes and simple tall singles. Ruffles, quills and layers abound. 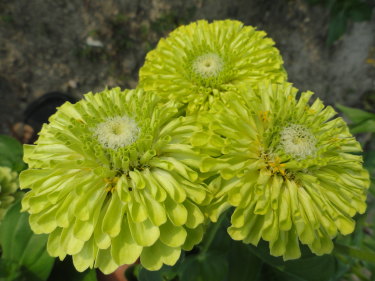 But where once this heat-loving, attention-grabbing annual was most associated with flat, fussy bedding, the bloom is now tapping into our desire for the unruly and wild. Zinnias can mix it with statuesque dahlias and cannas and with billowing cosmos and dill. They can hold their own in the vegetable patch.

In fact their role as a companion plant is part of their current appeal, attracting butterflies, bees and other beneficial insects. They are also perfectly aligned with the burgeoning popularity of seed saving, being best grown from seed rather than seedling as they hate root disturbance.

They also won’t stand up to frost or humidity but are otherwise very accommodating, so much so they have even made it into outer space. About five years ago zinnias became the first flower seeds successfully sown by NASA astronauts aboard the international space station – albeit with the help of fans to reduce humidity and LED lights playing the role of sunshine. 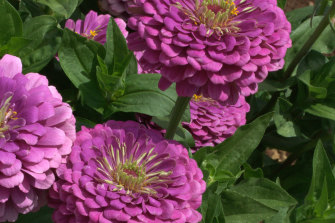 Back on earth David Glenn, owner of Lambley Nursery, in Ascot near Ballarat, says he only ever sows zinnias seeds directly into the garden – once the weather warms up in November and December. He says he finds zinnias raised earlier but undercover in pots are more susceptible to damping off disease that causes young seedlings to collapse and die.

Others do, however, get good success – and a head start – by sowing them early in modules of seed-raising mix and covering them with vermiculite to help protect against fungal infections. But they do need to be kept in a warm, sunny spot at 20° to 22°C, and the seedlings then hardened off and transplanted before the roots outgrow their space.

Whatever happens, don’t be tempted – even with all the extra time and impatience of lockdown – to get them into the ground too early. They won’t survive. Zinnias, which hail from the Americas, particularly Mexico, like warm soil and plenty of sunshine. Given the right conditions, they will germinate in little more than a week and, with minimum cossetting, turn into exuberant flowers in two to three months. But good drainage is crucial.

Being native to dry grasslands they don’t like damp roots and the leaves are also susceptible powdery mildew. To minimise the risk, don’t overcrowd them and avoid overhead watering.

Glenn says this year he is also sowing his seeds with neem cake, a natural fertiliser and soil conditioner that helps protect against the Fusarium fungal infections that can also strike. 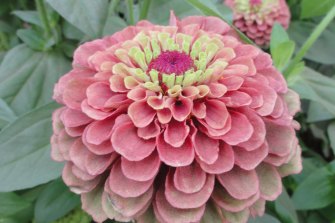 But once you have healthy zinnias, they are prolific. The more flowers you cut, the more that grow. Glenn says he picks bunches each week through summer and that, once, when the late artist Margaret Olley came to stay and he placed a zinnia posy beside her bed she was so delighted she took them home with her. She then had him dispatch – to her home in Sydney – a bunch every week. They wound their way into her work, and she named one of her paintings “David’s Zinnias”.

They were “Benary’s Giant”, which, true to their name can sport blooms 15cm across on 90cm tall stems. But there are plenty of smaller options too. My hands-down current favourites are the “Queeny” Series zinnias with acid-lime blushes. There is absolutely nothing they don’t look good with.

Make the most of your health, relationships, fitness and nutrition with our Live Well newsletter. Get it in your inbox every Monday.

Most Viewed in Lifestyle