The life-saving violin of Auschwitz 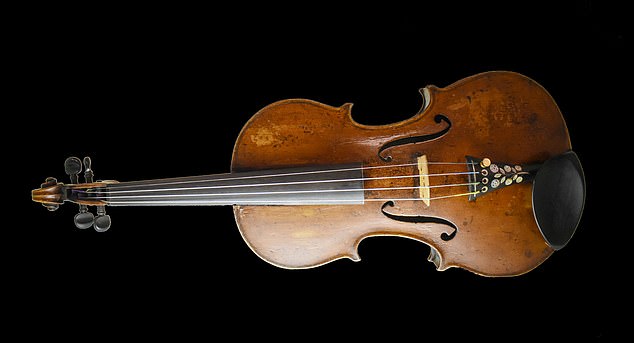 That violin means everything to me. My family survived only because of it

Pulling her thin top around her for warmth, Rosa Levinsky picked up her violin bow and started to play. Her fellow musicians did the same, filling the air with sweet melodies. But they weren’t performing to an appreciative audience in a concert hall. They were at Auschwitz, witnessing a scene of horror. Thousands of terrified, starving Jews were spilling from trains. Men were herded away and mothers separated from their children by guards with ferocious dogs. Through it all the orchestra played on. They were officially there to ‘welcome’ the newcomers, but all knew their real purpose was to offer a false sense of security as the Nazis sent innocents to the gas chamber.

Rosa couldn’t allow herself to think of this as she played that freezing winter morning in 1942. She, like the others in that rag-tag orchestra, was a Jew who’d arrived at the notorious death camp in Poland on one of those packed trains. She’d survived so far only because she could play the violin like an angel. So she played on – for her life. 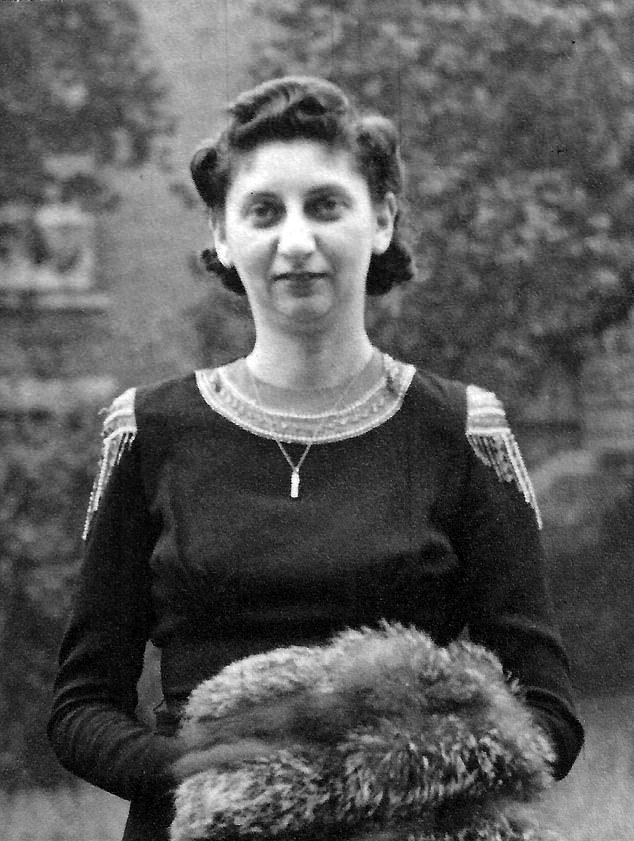 Rosa Levinsky was a violinist with the Berlin philharmonic in 1938

The deafening applause was beginning to fade as Rosa, then 28, made her way to her dressing room at the Berlin Philharmonic Hall on 9 November 1938. Two years previously, she’d been playing for the Royal Philharmonic Orchestra in London when she was head-hunted by their German equivalent and offered the prestigious position of second violinist.

Rosa’s family had been concerned about her going to Germany because the Nazis were in power, but thought that her British nationality would keep her safe. And indeed, until that night, it had. But that evening would become known as Kristallnacht – when Nazis ransacked synagogues, smashed up Jewish businesses and arrested countless Jews. Until then, Rosa had been happy in Berlin, although she’d become increasingly concerned at the treatment of her people, who were forced to wear Star of David armbands to identify them in public. She had planned to return to her home in Leeds when her contract ended in December 1938.

But Kristallnacht ended such hopes. ‘As she walked home soldiers, seeing the Star of David on her arm, came to push her into the gutter,’ says her niece Natalie Cumming, 82, whose book The Fiddle tells Rosa’s story. ‘The Gestapo were already removing all the Jews from her block of flats. She was rooted to the spot in terror.’ An officer arrested her. ‘She pleaded that she was British but to no avail,’ says Natalie. ‘She was sobbing but clung to her violin because it was so precious to her. She didn’t know how important it would be.’ In fact, that instrument, made in 1883 and given to Rosa by her father, would save her life.

Rosa hauled the violin on to the truck alongside other terrified detainees. They were packed like sardines with no water or food as they travelled to their unknown destination. Eventually they arrived at Mauthausen in Austria, a labour camp where they were forced to toil on the ‘Stairs of Death’ – carrying huge blocks of granite up a steep hillside every day. Failure to salute guards or other trivial offences meant being forced to push a fellow prisoner to their death from the top of the stairs then waiting your turn.

Gradually the workers were starving to death, their feet and hands blistered, bodies broken. For Rosa, worse was to come. Hearing her playing the violin outside her hut one evening, one of the guards grabbed her and forced himself on her. ‘Then he spat on Rosa and walked away,’ says her niece. ‘She was bleeding and in great pain but there was nothing she could do.’

She left Mauthausen in 1940 and after another hellish truck journey found herself at Auschwitz. A female SS guard spotted her violin – it was Irma Grese. Nicknamed the ‘Hyena of Auschwitz’, she was notorious for her cruelty to prisoners and enjoyed whipping them. Despite her reputation, she handed Rosa a lifeline, arranging for her to play in the camp’s orchestra which performed to the officers in the evenings and later at the sidings when the trains arrived. Not only did it mean a little extra food, Rosa was placed in a hut with a heater, mattresses and even a blanket – much needed when all she had were flimsy clothes, no coat and odd shoes.

But immediately she discovered the real role of Auschwitz. ‘From the window of her hut she saw two bigger huts with huge queues of men, women and children being forced in,’ explains Natalie. ‘Then Rosa saw a soldier climbing a ladder to an opening in the roof, carrying a large metal canister and wearing a face mask and long, protective gloves. He opened the tin and quickly threw the contents in, slamming the cover shut and rushing back down the ladder. There came the most agonising screams from the building.’ The Nazis’ ‘Final Solution’ had begun – the systematic murder of Europe’s Jews.

But while Rosa was saved from the gas chamber, her life was still tough. One night she was given a bath and shaved before being taken to the camp chief Rudolf Höss. ‘The moment she entered the room, she saw a large bed and knew why she was there,’ says her niece. ‘She was sickened, but it meant life.’

One night came the sound of gunfire which carried on the next day. The Russians were near. The orchestra and hundreds of others were crammed on a train. For days they had no food or water and 27 of the 39 people in Rosa’s carriage died of starvation or suffocation on the journey. Their destination was the Belsen concentration camp in Northern Germany, where Rosa’s routine continued as it had in the previous camp – clearing dead bodies by day and by night playing for the officers, including Höss and Grese, who’d fled Auschwitz.

When spring blossomed in April 1945, the sound of bombs and gunfire could once more be heard. The orchestra sheltered in their hut, terrified. ‘The door was thrust open and two soldiers in strange uniforms stood on the threshold,’ says Natalie. The soldiers were British. ‘They were free. And Rosa was alive.’ 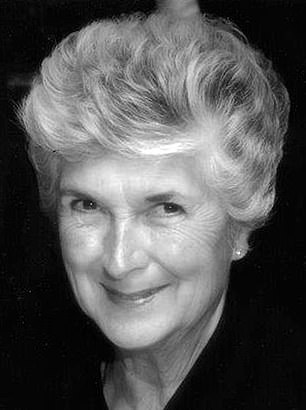 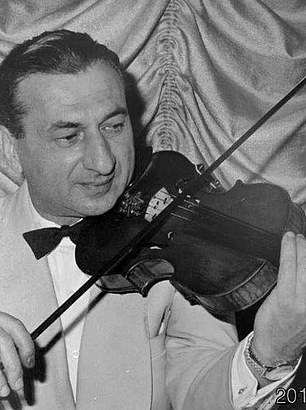 Left: Natalie wrote the history of her Aunt Rosa’s violin. Right: Rosa’s violin was passed on to her brother Israel (Natalie’s father), who performed with it for decades

Two years later, in the Easter of 1947 when Natalie was nine, she met her aunt for the first time. Rosa was staying with her mother in Leeds, having first been treated in a Hanover hospital and later in a sanatorium in Surrey. Somehow she’d found the strength to testify against her captors at the Nuremberg trials. ‘We’d never met before as she’d already moved to Berlin when I was born,’ explains Natalie. ‘I remember going to my grandmother’s house in Leeds and Rosa was lying on the chaise longue. Her Auschwitz number was tattooed on her arm. My father told me she’d been an absolute beauty, but now her hair was grey and she was very thin.’

Rosa had contracted tuberculosis in the camps. ‘I got to know her very well,’ recalls Natalie. ‘She was a lovely lady with a sunny disposition and no self-pity. She liked to chat and found me a willing listener. Because she was dying, she said to me many times, “The world must never forget. This must never happen again.”’ It’s why Natalie is sharing her aunt’s story today.

Rosa died in autumn 1947 aged just 37. ‘It was at the funeral that my grandmother gave my father Rosa’s precious violin,’ says Natalie.

He played it until his death, aged 73, in 1985 when it passed to Natalie, who doesn’t play. It stayed silent and fell into disrepair until she took it to BBC’s The Repair Shop three years ago. Now faithfully restored, this most precious, life-saving violin has been donated by Natalie to The Yehudi Menuhin School in Surrey where it’s played with pride by just two of their best pupils. 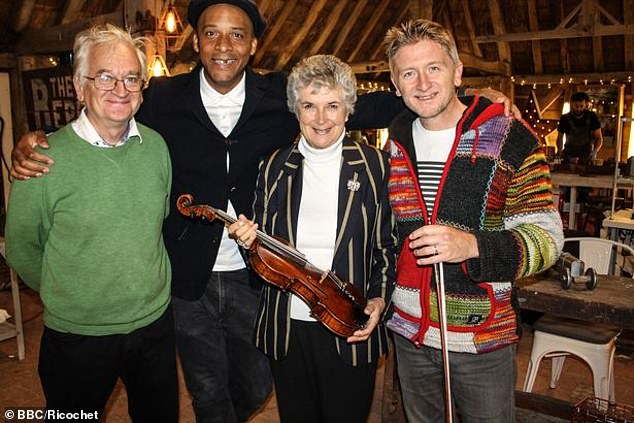 ‘That violin means everything to me,’ says Natalie. ‘It’s the most important thing in my life. My family survived only because of it. The memory of it being played by my father will stay with me for ever.’