Heavy rainfall and flooding events have rendered up to 30 per cent of the state’s national parks and walking trails inaccessible – and remediation work can take months to complete.

The state of many national parks is unlikely to improve in the coming months after the Bureau of Meteorology declared another La Nina was under way for the third consecutive year that will see more rain over the east coast this spring and summer. Saturated landscapes and dams at capacity are likely to heighten the risk for flash flooding. 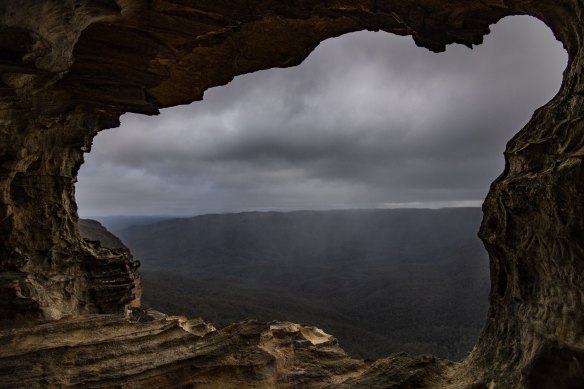 Many national parks trails across the state remain closed after years of bushfires and floods.Credit:Wolter Peeters

A NSW National Parks and Wildlife Service spokesperson said there were 620 walking tracks in the state and visitor safety was a priority.

Parts of the Blue Mountains National Park have been closed after sustained wet weather, subsequent geological instability or infrastructure upgrades. Visitors to the area have been urged to be on high alert for landslides, rockfalls and treefalls.

It has taken NPWS more than three years to repair 80 per cent of the 11-kilometre Grand Cliff Top Walk near Leura after bushfires, floods, landslides and COVID-19 hampered delays.

The mammoth repair effort has seen more than 663 loads of material – each weighing about 500 kilograms – flown into the area to repair the walking track. The area is expected to reopen next week.

“NPWS staff and contractors have worked hard to assess, repair and re-open damaged tracks and trails,” the spokesperson said. “This has been a big job, given NPWS have tracks spanning approximately 2145 kilometres across 185 reserves within disaster-declared local government areas.”

National Parks Association executive officer Gary Dunnett said the North Coast was one of the most impacted areas in the state following devastating flooding earlier this year. He added while repairs on trails were taking a while, there was a huge demand on the construction industry to help rebuild entire communities.

“We’ve seen this happen whenever there is a major event,” he said. “The most important thing is that when these walking tracks are rebuilt, we obviously need to be looking at the most sustainable [way to do so] so the next time this happens, it minimises the chances of taking them out.”

“In some cases, our teams hike into dense bush with tools in their backpacks, and work in wind and rain, digging and laying hundreds of kilos of track material that has been lifted into place by helicopters,” he said.

Sydney Bush Walking Secretary John Kennett said the organisation’s Blue Mountains walking program is a fraction of what it used to be in 2019, before bushfires, the pandemic and damaging rains. He leads about 30 walks a year for the group.

He said members love heading to the Blue Mountains and that a lot of the closed national parks trails are some of the most popular.

Kennett, who has been walking once a week for a “long, long time”, is now exploring the Wollemi National Park and areas around Colo.

“There’s just so much wilderness that I’ve still been able to walk every week. I’ve just had to change where I’m going.”

Earlier this year, a father and son from Britain were killed when a cliff face collapsed in the Blue Mountains.

The mother, 50, and a second son, 14, were critically injured, while the couple’s 15-year-old daughter walked out to safety unharmed.