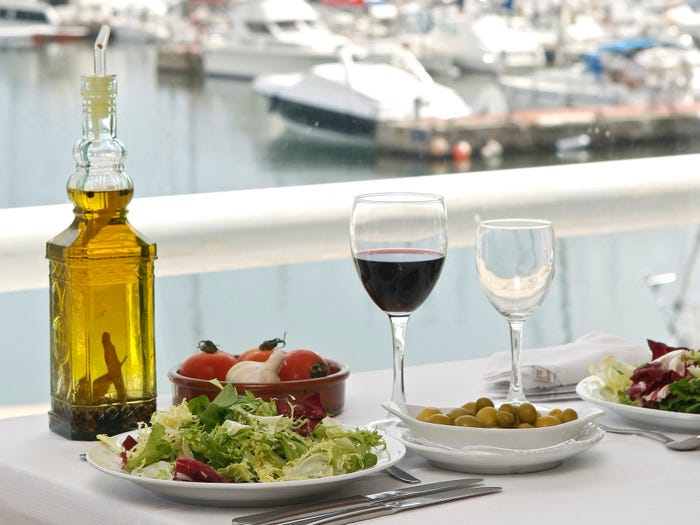 There's more evidence the Mediterranean diet could have benefits for long-term health by lowering your risk of diabetes, particularly if you're overweight, according to research published November 19 in JAMA Open Network.

Researchers from Brigham and Women's Hospital and Harvard Medical School looked at data from 25,317 female health professionals over 25 years.

They found that overweight women who most closely followed a Mediterranean-style diet were 30% less likely to developed type 2 diabetes than anyone else.

Their diets consisted of lots of healthy fats from olive oil and fish, fruits and vegetables, whole grains, beans, nuts, and seeds. They consumed a moderate amount of alcohol (between half and one and a half drinks daily, on average), and ate less processed foods and red meat than average (compared to other study participants).

The research team said they believed the Mediterranean diet helped improve insulin resistance in people with a higher body mass index (weight relative to their height).

When a person's cells become less sensitive to insulin — a hormone that regulates blood sugar levels — they experience spikes in blood sugar, which can lead to diabetes.

There is a consensus among researchers that this is more common among people with a higher body fat percentage, perhaps because of how fat storage affects metabolism and inflammation.

Changing eating habits can have a marked difference, the research team found. But they cautioned that it's not a quick fix.

"[I]t's important to note that many of these changes don't happen right away — while metabolism can change over a short period of time, our study indicates that there are longer term changes happening that may provide protection over decades," Dr. Samia Mora, associate professor at Harvard Medical School and corresponding author of the study, said in a press release.

The study had some limitations: the participants were primarily white, well-educated women, and all of them had a background in healthcare. That means their experience could be very different from other segments of the population.

The research also relied on self-reported dietary habits, which can be unreliable. The researchers only recorded them at the start of the study, so it doesn't account for how or if participants' eating habits changed over time.

However, existing research supports the findings of this study.

Research also suggests the Mediterranean diet is linked to lower long-term risk of other illnesses, including heart disease and cancer, and may prevent other age-related health problems like cognitive decline.

"Even small changes can add up over time," Mora said. "And there may be many biological pathways that lead to a benefit. One of the best things patients can do for future health is to improve their diet, and now we are beginning to understand why."