Due to a halt in production on “The Walking Dead” caused by the coronavirus pandemic, the actual Season 10 finale will air as a special later this year. So, on Sunday, the season wrapped up with its de facto last episode, and it was kind of cat-aclysmic.

The episode, titled “The Tower,” was clearly never intended to be the actual season finale; it’s mostly just exposition. The survivors are hiding out in a hospital, and the Whisperers, now led by former country music star Beta (Ryan Hurst), do a lot of walking around looking for them.

In fact, the main villain of the episode turns out to be … cats. 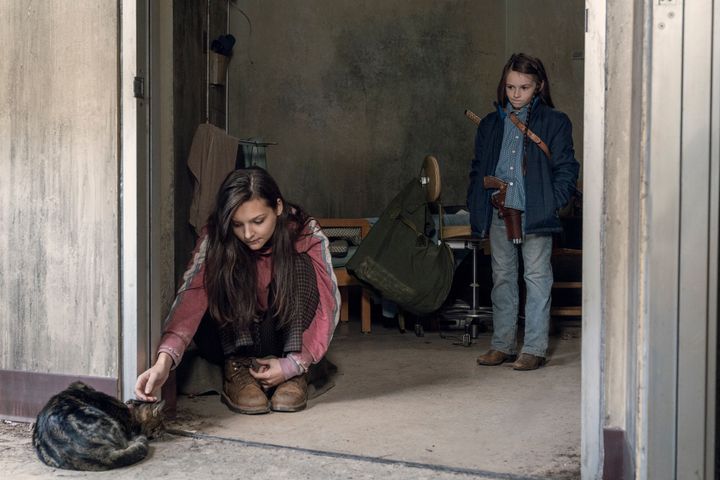 Cats seem to be the primary residents of the hospital in which everyone’s taken refuge; the cat pee smell is so bad that it’s part of the reason Judith (Cailey Fleming) eventually leaves to hang around outside with Daryl (Norman Reedus).

The cats’ biggest power move comes when they inadvertently lead the Whisperers to the hospital. After seeing a cat cross their path, the Whisperers abruptly change their course ― because after the upcoming war, the cats will inherit the Earth.

Not much happens with new character Princess (Paola Lazaro), either: After scaring away their horses, she searches for new rides for Eugene (Josh McDermitt), Ezekiel (Khary Payton) and Yumiko (Eleanor Matsuura). In the process, she ends up leading them through a minefield, where they get stuck for a while. But by the time the episode wraps up, they’re all friends.

Negan (Jeffrey Dean Morgan) and Lydia (Cassady McClincy) clash about him killing her mom Alpha (Samantha Morton) — which, yeah, makes sense. But by the end, they also hug it out, again indicating that the most interesting thing going on in this episode is cats.

Perhaps the cats are just mad that Michonne (Danai Gurira) is off the show now, since she was such a fan of feline art? Maybe someone on the production team thinks cats should’ve received more attention on “Tiger King” and wants to make a point? Regardless, the kitty overlords are rising up, and the results are cat-astrophic.