ICYMI, dalgona coffee is the newest viral sip. The Instagram-worthy beverage is super easy to make, but if you’re looking for a few different options, there are some fun variations from fans who’ve been experimenting with the beverage. These nine dalgona coffee hacks will help you switch up the trendy drink.

TikTok creator @iamhannahcho posted the dalgona coffee recipe on the platform on Tuesday, March 10, which soon went viral. The whipped coffee recipe was around a long before the viral TikTok video, as it’s popular in places like Pakistan and India. But it recently saw a surge of popularity in South Korea, where it is called "dalgona coffee." Since the whipped coffee creation is pretty easy to make, it achieved viral recognition on social media platforms as one of the perfect at-home treats.

The original whipped coffee recipe features two tablespoons of instant coffee, two tablespoons of sugar, and two tablespoons of hot water whipped together and poured over your choice of milk. Thankfully, these recipe variations are just as easy. Take a look at some of the popular dalgona coffee hacks making the rounds on Twitter and TikTok.

TikTok creator @veggiekins posted a version of the dalgona coffee trend, swapping out two tablespoons of matcha powder for the instant coffee. The other ingredients are unchanged. 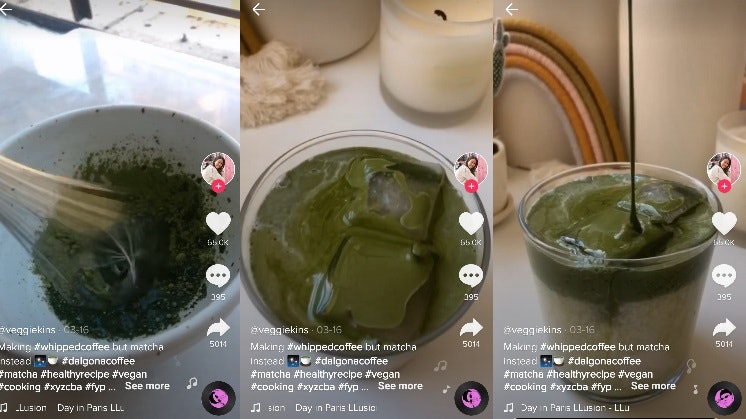 This recipe variation doesn’t take much extra effort. TikTok user @isabel.1002 turns it into a whipped vanilla coffee by adding a dash of salt, half a tablespoon of vanilla extract, and a bit of cornstarch (to help with thickness), before whipping it all together. Fun fact, salt brings out the sweetness of the sugar by making the flavor more pronounced, so don’t knock it till you try it. 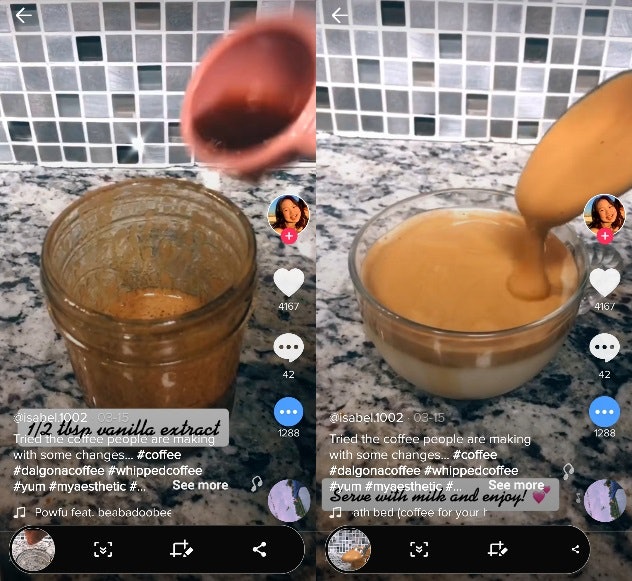 Several people on social media have gotten the idea to include Boba in their dalgona coffee. TikTok user @jadynjhh filmed the process, which includes the extra step of boiling your own tapioca pearls and adding a drizzle of honey to the boba for extra sweetness. Then, place the cooked tapioca pearls on the bottom of an empty glass, pour your choice of milk, and add the whipped coffee mixture. The finished sip includes whipped cream and chocolate chips on top. 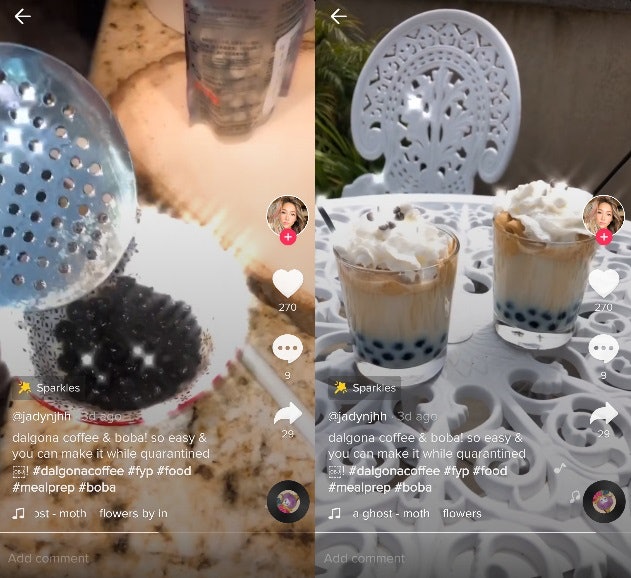 This is a simple twist suggested by a few on Twitter, such as @Nathan_fellicia and @Mrs_DongJun. The main recipe stays the same, but add in some whipped chocolate or cocoa powder to create a mocha-flavored coffee.

If you want to skip the coffee altogether, you can make dalgona chocolate. Just replace the two tablespoons of coffee with cocoa powder, like @joycexhu suggests on TikTok. She also uses four tablespoons of milk instead of hot water for a creamy texture. 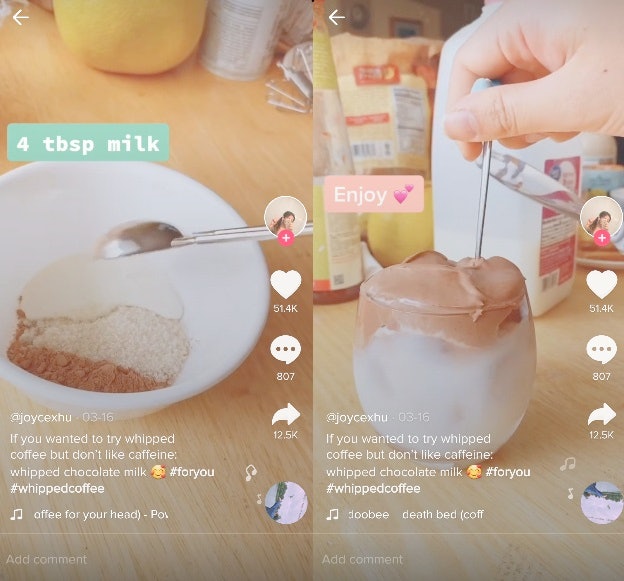 6. Use honey as an addition or substitute

Some users are saying they prefer honey instead of sugar. Twitter user @senaihagos used almond milk and honey in place of the original ingredients.

Twitter user @swwedishfish made a craft coffee by adjusting the recipe to make a lavender latte. You can achieve this if you happen to have some edible lavender at home or some essence of lavender in your kitchen supplies. It’s not clear how she whipped it in, but you can try adding a little to the mix for a floral flavor.

This recipe from @courtneylijones2 on TikTok doesn’t say how much cinnamon or ginger to add, but that’s something you can do to personal taste to give your whipped coffee a little spice. 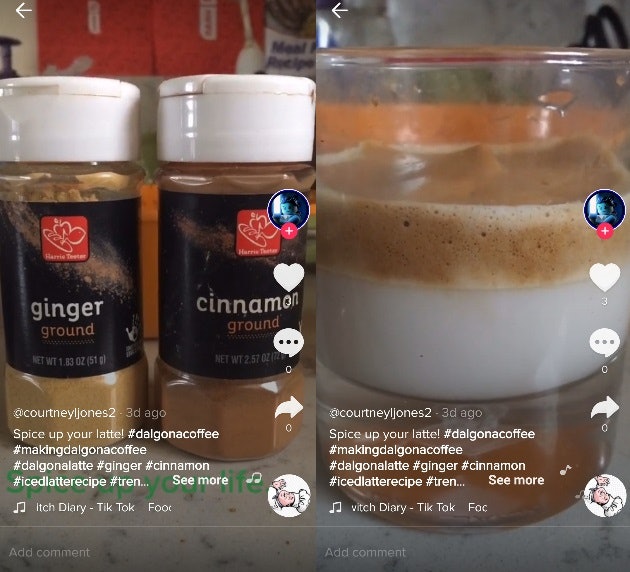 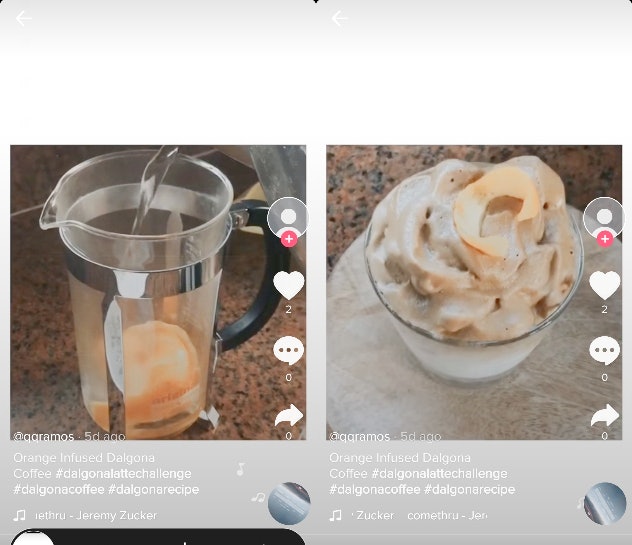 There are endless ways to create a dalgona coffee that’s all your own, so don’t be afraid to experiment with it to find your fave creation. 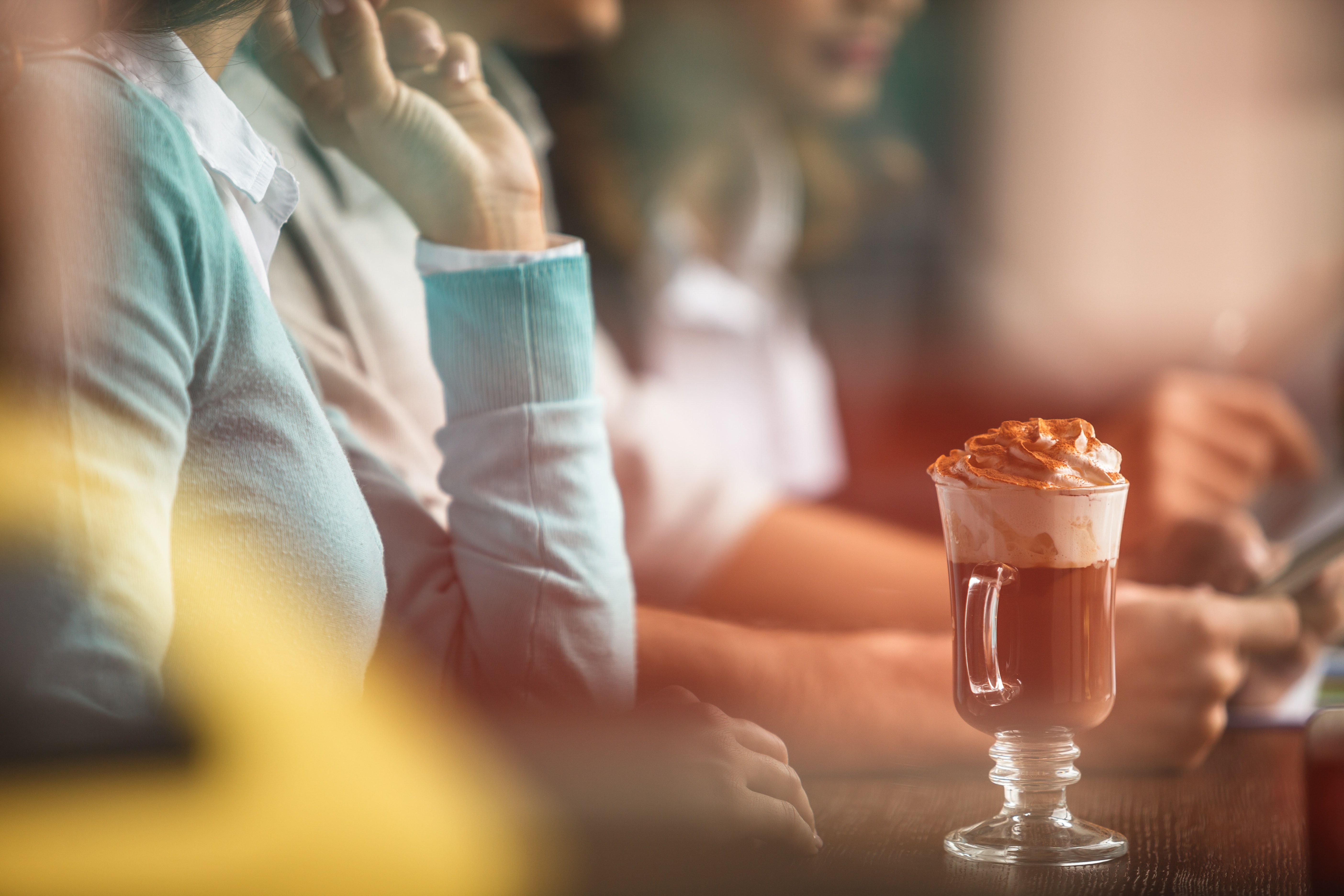 This Whipped Dalgona Coffee Recipe From TikTok Is A Luxurious Sip 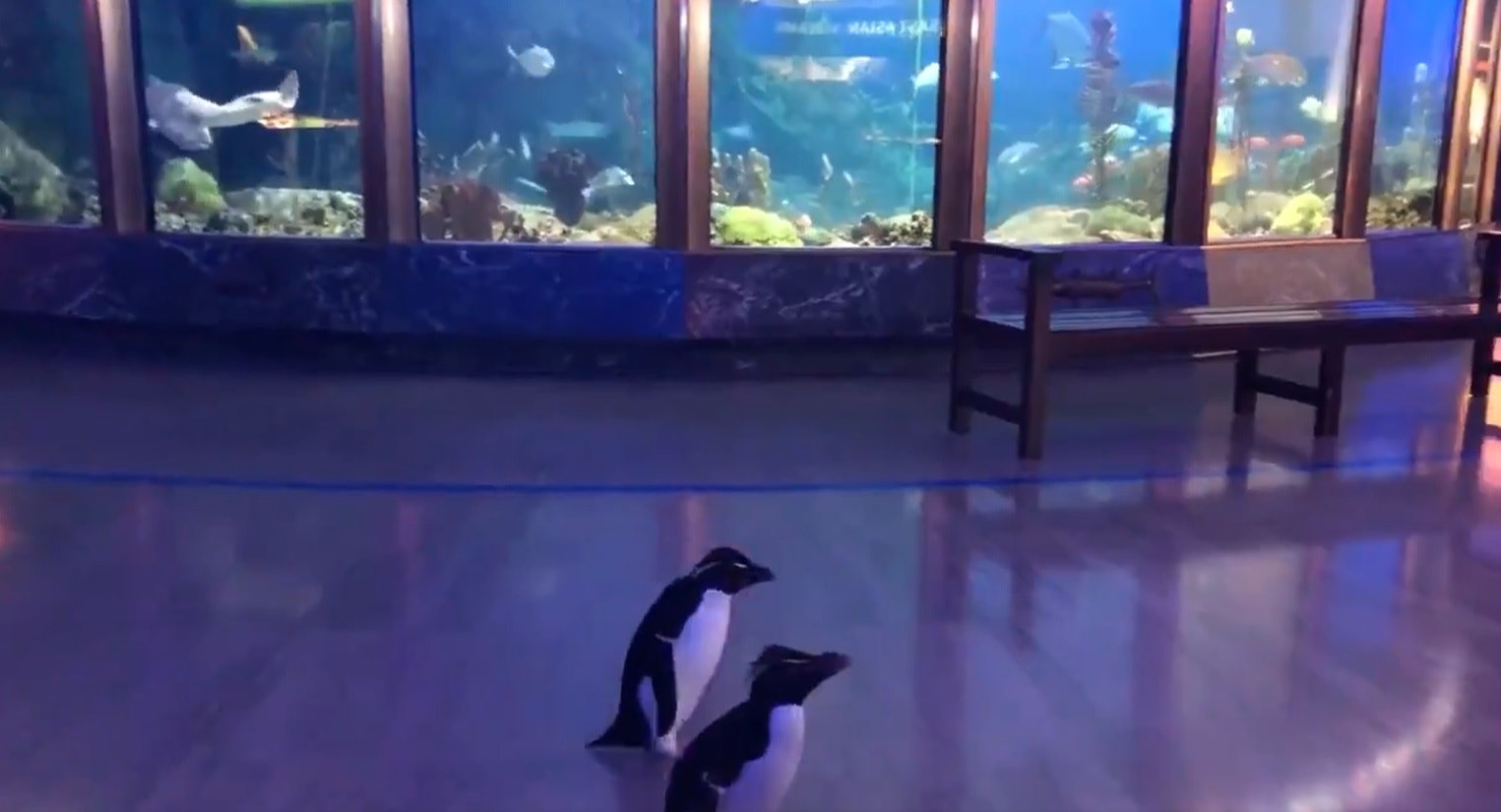 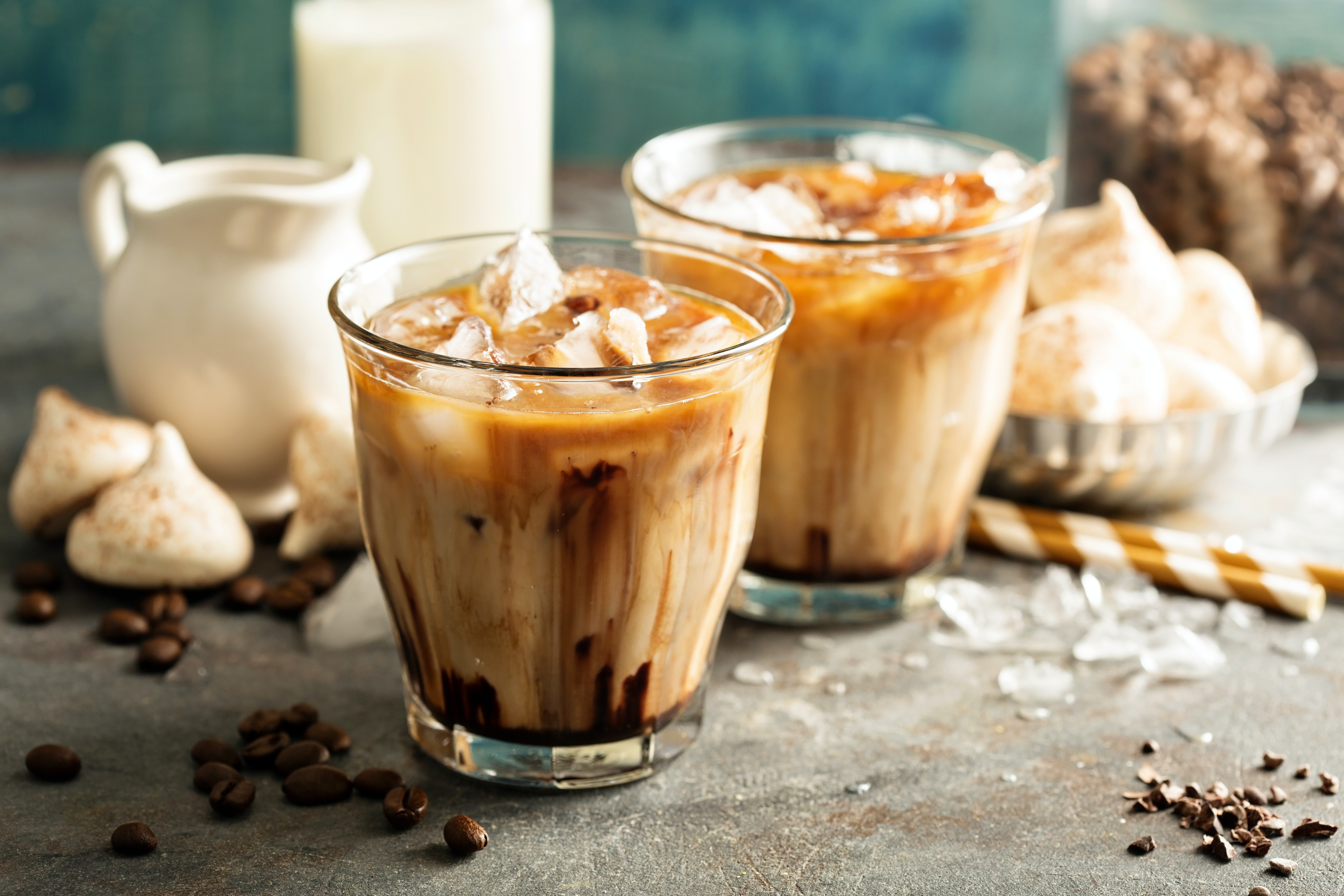 What Does Whipped Coffee Taste Like? Dalgona Coffee Has A Strong Flavor