Up until about 18 months ago, Jed Zimmer felt his anxiety and depression were such "a sign of weakness" he chose not to tell those around him.

He had visited a psychologist since about the age of 10, and had learnt to put his mental health "to the side". He could keep up a front – however exhausting that may be. 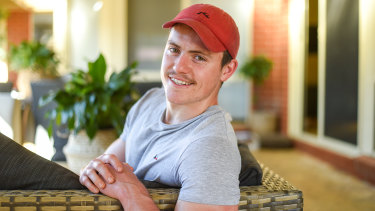 Jed Zimmer kept his mental health issues “to the side” and felt he could not talk about them for more than a decade. When he opened up 18 months ago it changed his life.Credit:Justin McManus

"I didn't want to open up to family and friends because I saw it as a weakness and a vulnerability," said Mr Zimmer, a personal trainer, now 22.

"Footy training, catching up with mates, everything was just a huge effort. I was constantly tired because I was putting on such a brave face, I was living in two different worlds."

It was not until even things he loved became exhausting that Mr Zimmer understood talking about it was "the complete opposite" of a handicap.

"Opening up is one of the best things I've ever done; seeking help … I'm so grateful I did," he said.

Mr Zimmer is among the 25 per cent of men research by the Australian Institute of Family (AIFS) studies says will be diagnosed with a mental health condition over the course of their life.

In any year, 15 per cent of men will experience a mental health issue, most commonly anxiety or depression, and three-quarters of Australians who die by suicide are men.

The first instalment of the long term study, Ten to Men, found only one-quarter of men experiencing mental ill-health would seek the support of a professional.

It found loneliness was a contributor to depression and thoughts of suicide.

“Men who reported lacking close friends or relatives were around twice as likely to have thought about suicide in the past 12 months,” said Dr Galina Daraganova of the AIFS.

“Among the younger cohort [boys 10-14 years old], anxiety was the most commonly reported mental health disorder – experienced by about 9 per cent of boys,” Dr Daraganova said.

According to Lifeline, 65,000 Australians make a suicide attempt annually and 3046 Australians died by suicide in 2018. It is the leading cause of death for Australians aged 15-44.

"[It] suggests that men may face a range of barriers to getting help when they’re experiencing poor mental health," Ms Hollonds said.

"Things like cost, wait times, stigma around mental health and fear that it will be seen as weakness to seek help, or to talk about feelings, may be potential barriers."

Ms Hollonds warned the fallout from COVID-19 job losses was likely to be long-lasting and urged people to support men around them to seek help.

Jed Zimmer said the best realisation from talking about his mental health was learning there is indeed "always someone out there who cares a hell of a lot more than you actually think".

His message to other men is "it's OK not to be OK: we all have our battles, there's constant stress in life but always remember there is light at the end of the tunnel and there is someone willing to help you.

"Things will get better."

If you or anyone you know needs support call Lifeline on 131 114, or Beyond Blue's coronavirus mental wellbeing support service on 1800 512 348