Let’s sing for victory! The grand VE Day 75th party has been postponed, but you can join our heroes’ choir for a glorious rallying sing-song on the big day, writes ROBERT HARDMAN

They were the words which helped a frightened nation to look beyond the torment and the pain towards a happier future. Certainly, if any one song could be said to define the spirit of wartime Britain, it was We’ll Meet Again by Vera Lynn.

Eight decades later, 24 million of us sat down on Sunday night to watch the Queen reassure a country beset by dark clouds once more.

And we heard Her Majesty conclude one of the most historic speeches of her reign not with words from Shakespeare or the Bible or Churchill or an illustrious forebear. Instead, she quoted Vera Lynn: ‘We will meet again.’

Which is why the Daily Mail is proud to lead a campaign to get the whole of Britain joining together to sing this modern classic once again — in unison.

Exactly one month from today, two momentous chapters in the modern story of Britain will coincide. May 8 is the 75th anniversary of Victory in Europe, VE Day, that euphoric moment when peace returned to a country shattered but unbowed.

Designated as a special Bank Holiday, this anniversary was to have been marked with a series of national events, culminating in the Daily Mail’s spectacular VE Day concert at the Royal Albert Hall. All that is now off. No one knows where we will be in our fight against Covid-19 by then. 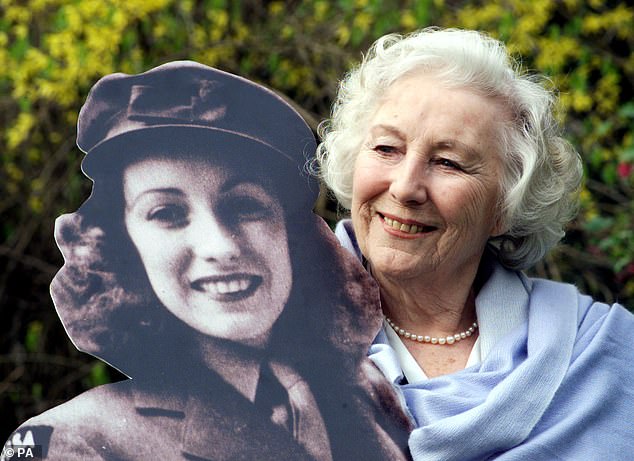 Dame Vera Lynn in the garden of the Savoy Hotel, after she was named personality of the century in a nationwide poll in March. She famously sang ‘We’ll Meet Again’

However, there is not the slightest prospect of a grateful nation embracing the wartime generation come May 8. That is for the simple reason that the Government’s 12-week isolation for the old and vulnerable will still be in force.

Though we may not be able to cheer them in person, that doesn’t mean we cannot try to cheer them up. In the process, we will be boosting the mood of the entire country. So, the plan is a very simple one.

Come 9pm on the evening of VE Day, the Mail — supported by Dame Vera herself — wants the whole country to throw open its windows and doors and sing We’ll Meet Again at the top of our voices.

Don’t worry about the words because we will be printing those in full in the Mail between now and then.

Don’t worry about the music, either. Come the night, BBC One will be broadcasting the original soundtrack as part of its VE Day coverage so just turn on the telly, clear your throats and channel your inner Vera Lynn. You, too, can be a Forces Sweetheart for a minute or two.

The idea has certainly met with the hearty approval of the Government and of our veterans’ organisations.

Dame Vera has long been an ambassador for SSAFA, the Armed Forces charity. Its chief executive, Sir Andrew Gregory, believes that her words remain as powerful today as they were when she first sang them in 1939.

‘Her ability to raise the morale of the troops, and indeed the nation, has been remembered ever since,’ he said last night.

‘Hence it is wholly fitting that we bring her song to life for VE Day 75. I know she will be proud to see her song unite the nation once again, particularly at a time when we are physically isolated.’

The Royal British Legion is also calling on its members to spread the word and prepare to sing.

Written by Ross Parker and Hughie Charles, the original was recorded by Vera Lynn at the outbreak of the war. She did it in a single take.

A singer since the age of seven, she had risen to prominence with the Joe Loss Orchestra and recorded her first solo record in 1936, Up the Wooden Hill to Bedfordshire.

But We’ll Meet Again struck an instant chord. By 1940, she had been christened the ‘Forces’ Sweetheart’, a label that stuck and which she still wears with pride at the Sussex home where, last month, she celebrated her 103rd birthday.

In 1943, Columbia Pictures turned the song We’ll Meet Again into a semi-autobiographical film of the same name starring Vera Lynn as an up-and-coming singer called Peggy Brown. Yet no one could ever say that the fame went to her head, as she ploughed on, touring the garrison camps and munitions factories. 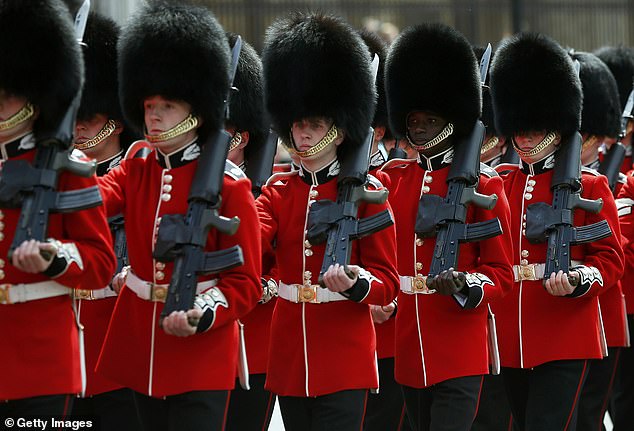 This year, the country will not be able to hold the VE day parade to mark the 75th anniversary of Victory in Europe on the day, but the Daily Mail is encouraging everyone to sing along to Vera Lynn’s song to regain some wartime spirit and show our gratitude to their generation

A year later, she was in the thick of the Burma campaign, singing at the front on the eve of the Battle of Kohima. As she told the Telegraph years later, it was just her and 6,000 troops who ‘behaved like gentlemen’ throughout.

One morning, she awoke to find four Japanese prisoners leaning against her hut. ‘The look I got,’ she recalled. ‘I was this young girl walking by in khaki shorts. I shouldn’t think they had ever seen a white girl.’ There were many hits, not least Bluebirds Over The White Cliffs Of Dover and A Nightingale Sang In Berkeley Square. Yet We’ll Meet Again always received the most requests — and still does.

Indeed, in the early stages of the war, there was a campaign by some of the more Blimpish members of the Establishment to have soppy ‘slush’ like this kicked off the airwaves in favour of more ‘virile’ material.

At one point, they succeeded as the BBC’s Dance Music Policy Committee took Vera Lynn’s regular Sunday night show off the air. She was soon back by popular demand.

There is not even a hint of martial spirit, let alone belligerence in her signature tune. Unlike the two great hits of World War I — Pack Up Your Troubles and It’s A Long Way To Tipperary — you could not possibly march to it. 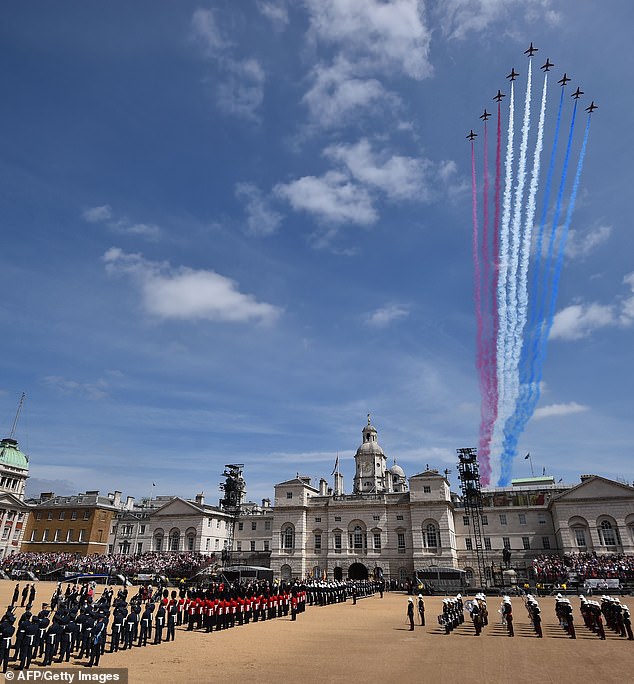 VE Day celebrations in 2015 to mark the 70th anniversary saw the The Royal Air Force Aerobatic Team, the Red Arrows, conduct a flypast as members of the armed forces and veterans gathered in central London and all over the country

Yet there are few songs which can so readily bring a lump to the throat or a blink to the eye, especially among those of a certain age.

However, as the Queen put it so eloquently in her broadcast, all those engaged on the front line today are as worthy of our esteem as those who saw Britain through the ‘different challenge’ of the war.

‘Those who come after us will say the Britons of this generation were as strong as any,’ she declared.

So why should we not all — young and old — share the same song?

This will not just be a sing-song for the elderly. All of us owe an eternal debt to those who led Britain and the free world to victory in 1945. We have cancelled the fetes, the street parties, the church services and the concerts.

It means we cannot give our old soldiers, sailors and aircrew — and the families who helped them through the war — the thanks and applause they so rightfully deserve. It means that we cannot gather to commemorate those who never made it home. So be it.

But then let us sing their song. Let us make it our own.

Even if it is just for one day, it will make us all feel better,

Because as those two indefatigable ladies have told us —and who would quibble with Her Majesty and Dame Vera? — we really do know we’ll meet again some sunny day.

For further details and revised plans for the Mail’s VE Day concert and screenings, go to veday75.co.uk