Two of the women accusing NFL quarterback Deshaun Watson came forward publicly on Tuesday, offering further details about their alleged interactions with the Houston Texans player and the “terror” he has caused. Twenty-two women have accused Watson of civil assault, sexual assault. or intentional infliction of emotional distress in recent weeks, which Watson has denied.

Ashley Solis, the first woman to file a lawsuit against Watson, tearfully told reporters Tuesday that her work as a massage therapist has been “forever tainted” by Watson’s alleged conduct.

“Deshaun Watson assaulted and harassed me on March 30, 2020, in my own home, doing what I love most: Massage therapy,” Solis said. “…I replay the incident over and over in my head, as if I’m trying to wake up from some horrible nightmare. Only that nightmare is real.”

In the lawsuit, Solis alleges that Watson intentionally exposed himself during the massage and repeatedly tried to direct her to his penis, before purposely touching her hand with his penis. When she started crying and asked him to leave, Watson allegedly responded, “I know you have a career and a reputation, and I know you would hate for someone to mess with yours, just like I don’t want anyone messing with mine.”

Solis said she’s struggled to keep working in the industry after her encounter with Watson, and said she’s suffered from panic attacks, anxiety and depression.

“I can no longer practice the profession that I love the most without shaking during a session,” she said. “My hands shake whenever I place them on a client and I have to cut the session short.”

The second accuser did not attend the press conference but was identified as Lauren Baxley. An attorney read a letter Baxley wrote to Watson following the encounter, in which Baxley alleged that Watson exposed himself to her during a massage and touched her hand with his penis.

“Every boundary between professional and therapeutic to sexual and degrading, you crossed or attempted to cross,” Baxley wrote in the letter, later adding, “You have deeply and irreversibly brought terror to me and others.”

The other 20 women, all of whom work in the health and wellness industry, have alleged what Buzbee described Tuesday as a “strikingly similar” pattern of conduct during incidents in 2020 and 2021: Watson exposing himself, aggressively directing them to touch inappropriate areas of his body, and in some cases, touching them with his genitals. Nineteen of those women have sued Watson for civil assault; another sued only for intentional infliction of emotional distress.

After the Tuesday press conference, Buzbee released screenshots appearing to show Watson communicating with alleged victims over Instagram. In one alleged screenshot, Watson appeared to tell a woman she could perform the massage in a sports bra and tight shorts. In another, he appeared to apologize after a massage occurred, writing, “Sorry about you feeling uncomfortable. Never were the intentions. Lmk if you want to work in the future. My apologies.” CBS News has not confirmed the authenticity of the screenshots. 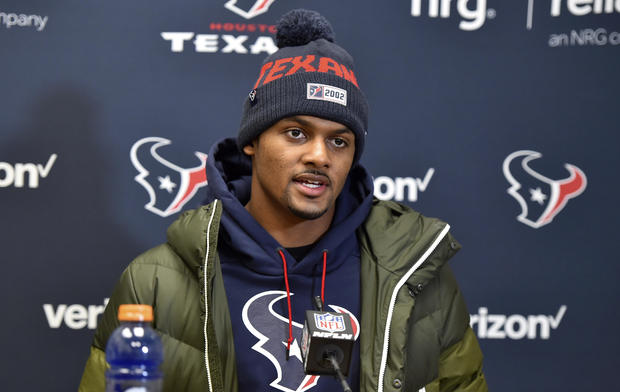 Watson’s attorney, Rusty Hardin, condemned the “false allegations in this avalanche of anonymous lawsuits,” in a statement to CBS News last week, and said his team would respond more fully to the claims “in the coming weeks.” Hardin previously called the first seven allegations “meritless,” and said “any allegation that Deshaun forced a woman to commit a sexual act is completely false.”

Hardin also released what he said were a series of emails on Tuesday apparently from Buzbee and his associate, Cornelia Brandfield-Harvey, seeking a $100,000 settlement from Scott Gaffield, another of Watson’s attorneys, the month before Solis’ lawsuit was filed. The February emails ask to plan a mediation and schedule a phone call. In a later email, Brandfield-Harvey demands a $100,000 settlement in Solis’ case.

Gaffield asked for the rationale for the $100,000 figure, writing, “We don’t believe that the alleged facts show that Deshaun did anything wrong with regards to Ms. Solis, but we are nevertheless happy to continue the conversation around a reasonable settlement figure because we believe he can learn a lesson about having put himself in this situation.”

“We made a legit demand. You rejected it,” Brandfield-Harvey replied. “We won’t be making another or bid against ourselves.”

“My email exchanges with Mr. Buzbee and Ms. Brandfield-Harvey were very clear,” Gaffield said in a statement provided to CBS News by Hardin on Tuesday. “We did not think that the facts showed that Deshaun did anything wrong with their client. We believed then – and fully believe now – that Deshaun learned a lesson about putting himself in this type of situation by interacting with people he does not know.”

“As the emails show, we were willing to continue discussions on Deshaun’s behalf to explore ways to prevent a lawsuit and a public spectacle,” Gaffield said. “But Mr. Buzbee informed us that he was unwilling to do so. We expect that this matter will be resolved in court.”

In response to the release of the emails, Buzbee said he won’t “comment back and forth in response to lawyer statements.”

“Lawyer Hardin has been dealt a bad hand and he’s doing his best to play it in the best way he can,” he said. “The most important thing is this ain’t about lawyers or their egos. What we heard from these women today is powerful. It stands alone, strong and true.”

Watson has only released one statement on his personal accounts about the allegations, which came soon after the first lawsuit was filed in mid-March. Watson said at the time that he’s “never treated any woman with anything other than the utmost respect,” and accused Buzbee of making a “baseless six-figure settlement demand” before filing the lawsuit.

“Unlike him, this isn’t about money for me — it’s about clearing my name, and I look forward to doing that,” Watson said.

All 22 of the lawsuits are civil suits, but Buzbee said Tuesday that two women had spoken with the Houston Police Department. The department declined to comment on Hardin’s Tuesday statement but had previously said it was investigating a report concerning Watson that was filed on April 2.

Buzbee said he was not involved in the two women’s decision to speak with police. He previously said he was worried about working with the department because Hardin’s son is part of the “exclusive Command Staff.”

“I am not saying in any way that Deshaun Watson’s lawyer, Mr. Hardin, has a son who has a position that would compromise HPD and its investigation. I support his service, along with all Houston police officers—I think the rank and file know that,” Buzbee said. “But, I am saying that me and my clients will go elsewhere to provide our evidence to investigative authorities. Stand by.”

The NFL is investigating the allegations. The Texans said last month that the team will stay in “close contact” with the league and will “continue to take this and all matters involving anyone within the Houston Texans organization seriously.”