A mother-of-five has revealed how she was left horrified after her ‘cheeky’ toddler shaved a huge patch of her hair while no one was watching using a pair of dog clippers.

Sian Coombs, 35, from Hawarden, North Wales, was preparing to groom the family’s cavapoo when Sariah, two, snuck out of the room with the clippers.

The mother-of-five assumed she had wandered off to watch TV so was left shocked when she saw the little girl wandering around with clumps of long, blonde locks falling from her head.

Sian explained: ‘My first instinct was of course one of horror, but I saw the big smile on her face change into an anxious expression when she saw my face so I quickly realised I needed to hide my own feelings to protect her.’ 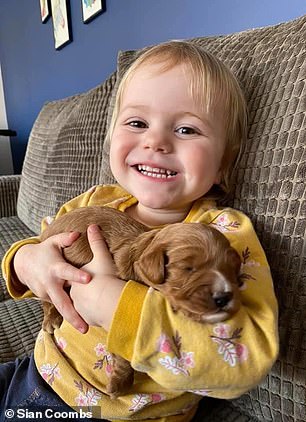 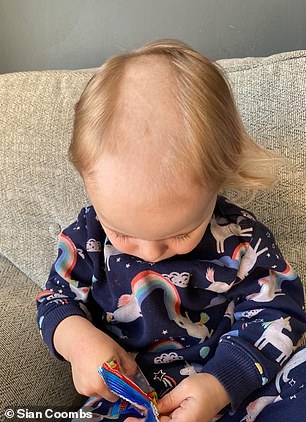 Sian Coombs, 35, from Hawarden, North Wales, said she felt horrified when she saw Sariah, two, had shaved a huge clump of hair from her head using a pair of dog clippers (pictured left, before the accident, and right, afterwards) 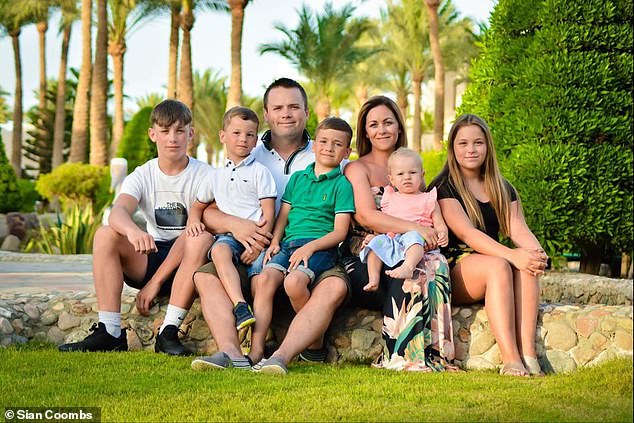 Sian said her children had been supportive to their youngest sister about her new haircut, (pictured, from left to right: Eldest Thomas, 15, Percy, five, Paul, Henry, seven, Sian with Sariah, two and Amara, 13)

Sian said: ‘My daughter is absolutely doggy obsessed and she loves to help me but the dogs didn’t enjoy her brushing them so I gave her a bowl of treats to feed to the dogs to distract them while I brushed.

‘She was doing a great job and by feeding the treats to the puppies, she kept them distracted and it kept her entertained too – so all was going well.’

Sian admitted she didn’t realise that the treats must have run out and her daughter mysteriously left the room.

She said: ‘I just assumed she’d gone to join her other siblings watching TV or something. 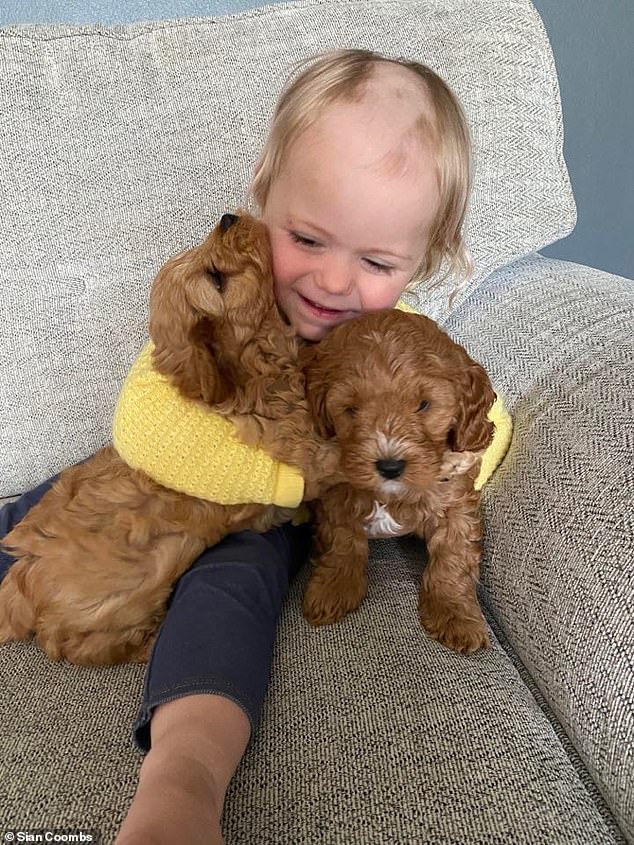 While her mother was left horrified by the new haircut, dog-obsessed Sariah apparently did not seem to mind her funky new trim

‘But she returned moments later holding the dog clippers in her hand, and as soon as I spotted her holding them, I leapt to get them off her but then noticed what she had done.’

Sian, who is also mother to Thomas, 15, Amara, 13, Henry, seven, and Percy, five, panicked as she realised Sariah managed to shave a whole patch down the middle of her head.

She said: ‘The hair was still sort of stuck to her head, but as I began touching it, clumps came away in my hand and I could see what had happened.’

Sariah’s first reaction was to say ‘Mummy did it’ after Sian was left standing with clumps of her daughter’s hair in her hands. 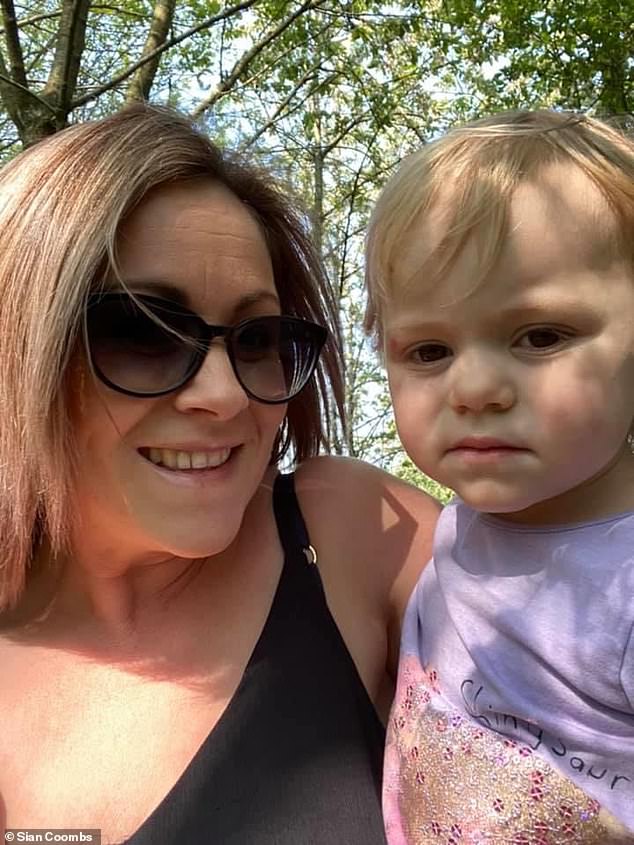 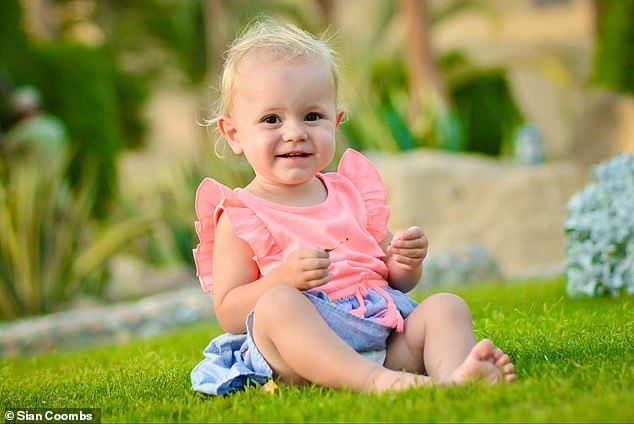 Despite her initial reaction being gobsmacked, the mother-of-five said in hindsight she was relieved her toddler didn’t take the clippers to one of the dogs becuasthey have a litter of seven-week-old puppies in the house.

She said: ‘She’s still breastfed so immediately upon realising there was a problem she asked for “bobos” so I just fed her to calm her down, and give me time to gather my thoughts a little.

‘I didn’t show her the result of her hair until a little while later but she just laughed when she saw herself in the mirror which I was relieved about.’

Describing her little one as ‘absolutely full of life’, Sian said her cheeky little girl copies everything she does, revealing: ‘She copies me with every task I do and she’s very bright. 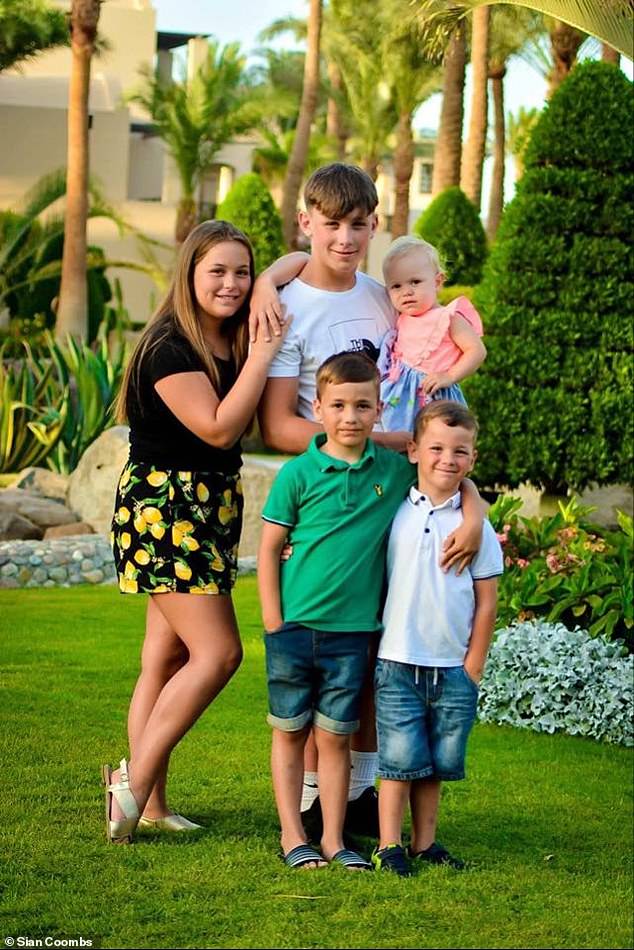 Meanwhile Sian’s other children quickly swept Sariah under their wing to cheer her up after the accident, taking her outside to play on the trampoline (Pictured: Sian’s five children Amara, Thomas, Percy, Henry and Sariah, during a family photoshoot)

‘I don’t think there’s much in my house that she doesn’t know where it belongs or how it works. She notices everything and just loves to join in and help out.’

The mother said it was also heartwarming to see that none of her other children seemed to mind their youngest sibling’s new hair-do.

Sian added: ‘My children didn’t say much to be honest. They don’t really care what her hair is like, they just love her for who she is regardless of anything else.

‘They all immediately went out onto the trampoline and played together like nothing had happened. 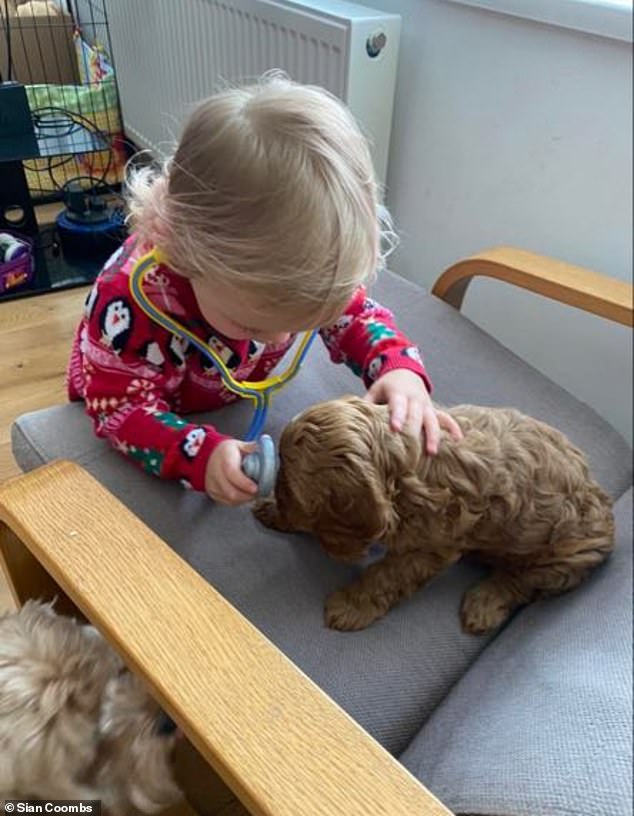 Sian said she had debated shaving the little girl’s hair  completely after the mishap, but has now decided to leave the locks as they are

‘My eldest was probably the most shocked, my teenage daughter just thought it was funny and the younger boys have barely mentioned it.‘

However Sian admitted that her husband, Paul, did question if she was joking when she messaged him to tell him the news.

She said: ‘He feels the same as me. We just love her to bits and want her to be happy, nothing else matters. These things happen in life sometimes.’

After sharing the news with her family, Sian considered shaving off the rest of Sariah’s hair but, after consulting with her daughter, has decided to leave it. 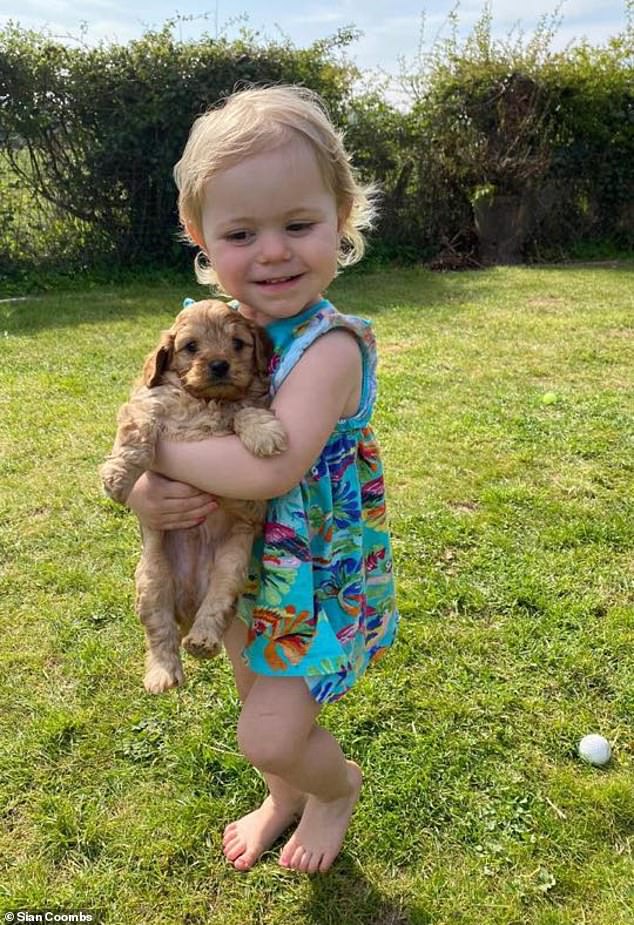 After the mishap, Sian admitted she just wanted the little girl to be happy and decided to leave the mishmatched haircut (pictured, before the chop)

She explained: ‘I messaged my hairdresser and a few hairdresser friends who all told me to leave it be.

‘I also asked Sariah and she got upset at the thought of having the rest shaved. My only concern now is to protect her feelings.

‘She doesn’t want it cutting so I won’t. I just want her to feel happy and not worry about it so we’re not making an issue of it.’

The mother said she is going to buy a few headbands and look into the possibility of supplements, but that aside, they are just going to wait for it to grow back. 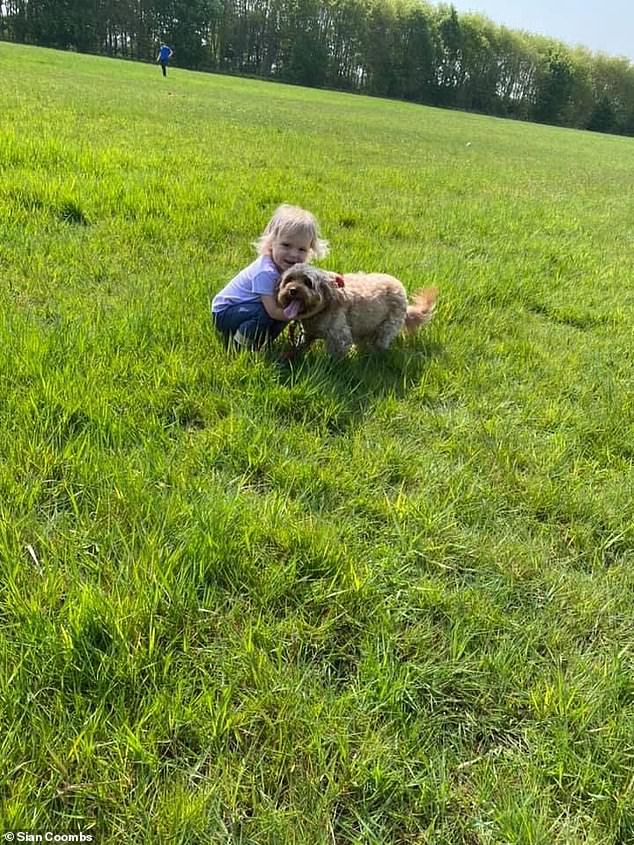 The doting mother said there were many more things to be upset about in the world right now than a dodgy haircut (pictured: Sariah playing with the family’s dog in the park) 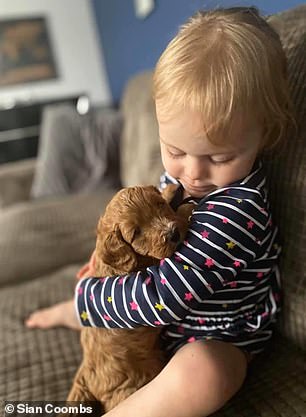 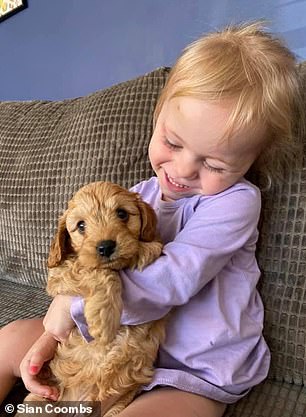 Hairdressers advised Sian to just let Sariah’s hair be for the time being (pictured left, before the incident, and right, after)

She added: ‘I’m extremely grateful she’s only lost her hair down to a silly accident and not something far worse.

‘There is an awful lot more going on in the world right now, a dodgy haircut isn’t a reason to be too upset.

‘I’m only too aware of people whose children lose their hair as they’re battling life threatening illnesses; my daughter is perfectly healthy so I don’t need to worry.’

‘It certainly caused a lot of drama in our house yesterday as friends and family were all messaging to see what happened. They all know what Sariah is like, so I can’t imagine anyone who knows her is too surprised!’ 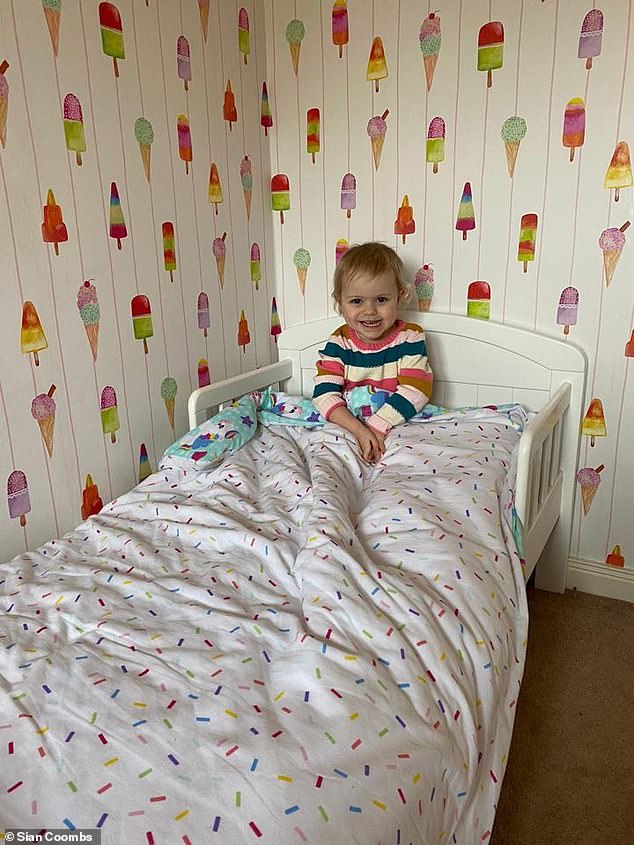 Sian said she was happy the hair loss was down to a silly incident rather than a horrifying accident (pictured, ‘cheeky’ Sariah in her bed at home before the incident 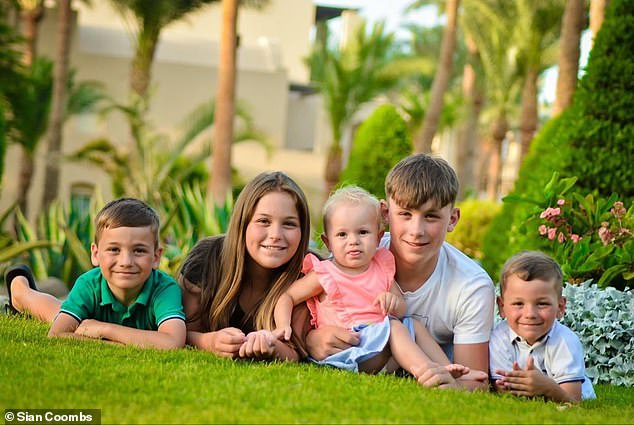 The mother-of-five said Sariah’s siblings had not minded her new look, with eldest Thomas (pictured) finding it particularly funny