Australian Council of Trade Unions secretary Sally McManus is jostling for changes to the government’s JobKeeper package to ensure more workers get the $1500 a fortnight wage subsidy and hopes that after the pandemic there will be more secure, permanent jobs.

Ms McManus congratulated the government for choosing to bring in a wage subsidy and free childcare, but has issues with the exclusion of some casuals and visa holders from JobKeeper that the union will push to change ahead of the legislation being put to Parliament on Wednesday. 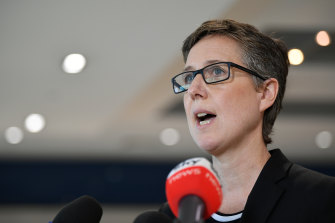 Australian Council of Trade Unions secretary Sally McManus is calling for an expansion of the JobKeeper payment to cover casuals and visa holders.Credit:AAP

"We've got concerns about it, and obviously we've been raising those publicly and obviously privately with the government. Some of them go to who is covered by it," Ms McManus told ABC TV's Insiders on Sunday morning.

"So first of all, casuals – there's about 1.1 million casuals who will miss out on this payment because they haven't had 12 months continuous service," she said. The JobKeeper package does not cover those who have only started their job on a casual basis within the last 12 months.

She acknowledged there would be lower paid workers who were paid more than they would normally get, but also said higher paid workers would get "much, much less" than under the British or Danish systems.

When the pandemic has passed, Ms McManus said she hoped there would be a focus on changing the casualisation of the workforce.

"I think that the biggest thing for us, as a country, is we've got some strong institutions like our public health system, but casual work – too many insecure jobs.

"It's just been so exposed about how much risk has been shifted on to the individual. Coming out the other side, that's something we'd really like to see changed. We need more permanent jobs for more Australians," she said.

Changes to the Fair Work Act, which the government wants to do for a finite period, have also concerned the union. Ms McManus said employers who have not been negatively affected by the pandemic could force workers to take all their annual leave and they would push back against any changes.

"We understand the government wants this over and done with and wants to make sure that they've got everything in place," she said.

"But we're just saying to them – you can get everything you want through co-operation and by doing it through the way that we've already demonstrated that we can without having those mistakes that will inevitably happen, and quite frankly, some rorting from some employers if you just go the full sledgehammer."

Another looming issue for the government and the union is an increase for the $39,000 minimum wage, with the ACTU still pushing for a 4 per cent increase from July 1.

"We are going to be sensible, we want to save jobs," Ms McManus said, saying the decision would be looked at in June with the details about the pandemic changing regularly.

"We've got to think, as the Prime Minister has talked about, about the snap back. If we want a snap back, we have to make sure that people have got money in their pockets," she said.

"Because for a long time, we're going to depend on our domestic economy."