The University of Illinois is ramping up enforcement of restrictions on student activity after more than 330 COVID-19 cases in two days on the school’s Urbana-Champaign campus, school officials said. In an email to students, Chancellor Robert Jones said he expects all undergraduates to “limit their in-person interactions to only the most essential activities” for the next two weeks starting Wednesday evening.

The University of Illinois isn’t the only university in the state seeing a spike in COVID-19 cases. Illinois State University in Normal is reporting about 1,025 students have tested positive since the start of the fall semester two weeks ago, nearly 5% of the student body.

“The irresponsible, and I might add, dangerous actions of a small number of our students has created the very real possibility of ending an in-person semester for all of us here at Illinois,” Jones wrote.

Since students returned to the Urbana-Champaign campus Aug. 16, more than 1,000 people on campus have tested positive. University officials say about 800 people are currently in quarantine. Jones says there is no evidence the spike of the coronavirus among students has spread to instructors or to the local community. 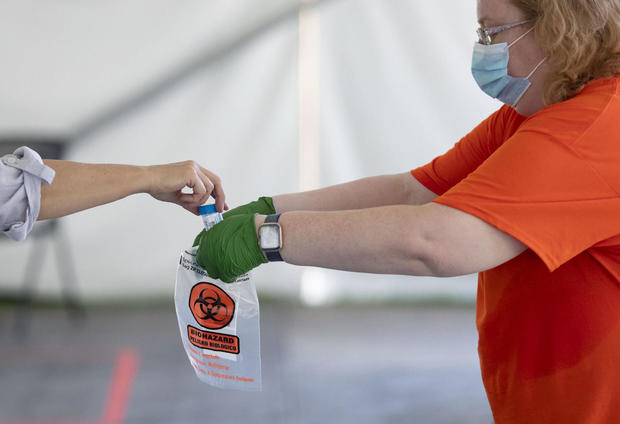 Illinois requires everyone on campus to take a saliva-based test it developed twice a week, wear masks, and show proof of a recent negative test before entering campus buildings. School officials decided the precautions would allow students to return to campus for the fall term. About two-thirds of the university’s classes this semester are entirely online. A third of the classes have in-person components.

Jones is blaming the rise of COVID-19 cases on campus on the behavior of a small number of students. He pointed to students going out in public despite being tested postitive, avoiding contact tracers and joining large gatherings.

“Students who do not comply with campus COVID-19 rules or who fail to follow any instructions from Champaign-Urbana Public Health District will face immediate suspension,” Jones wrote.

Officials say students who host parties or fail to comply with quarantine or isolation directions will face “immediate suspension.” As of Wednesday, two students and a fraternity have been suspended, with more than 100 students facing discipline.

The university is reporting 182,060 saliva tests have been performed since July. The school’s seven-day average positive rate stands at 1.16% , up from .75% last week.

Jones said the number of new cases in recent days has progressed at a rate that will double every seven days if students don’t follow the actions he suggests. At that pace, as many as 8,000 people could be infected this semester.

Last week, CBS Chicago reported the rapid COVID-19 testing at the university is taking days for students and staff to get results — not the promised hours. Staff members said the demand is out pacing the amount of time it takes to process the tests.

Since Aug. 17, Illinois State has conducted around 4,400 tests at three on-campus locations, yielding a testing positivity rate of about 24% in the past week, officials said.

“As our surveillance testing ramps up, we expect that expanded testing will result in a lower positivity rate,” said John Baur, professor of chemistry and ISU’s COVID-19 testing coordinator.

In Illinois at large, public health officials reported 2,128 new confirmed COVID-19 cases and 27 deaths in the state. The Illinois Department of Public Health now reports a total of 238,643 cases and 8,091 deaths.