Melbourne Water has apologised for a "rare event" that led to more than 270,000 Victorians being told to boil their drinking water for up to two days last week. 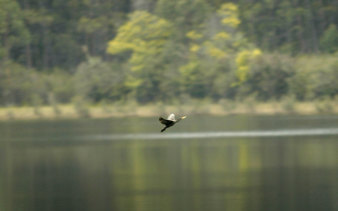 Untreated water from Silvan Reservoir was accidentally released on Thursday night, leading to boil-water notices being issued for 99 suburbs.Credit:Joe Armao

Yarra Valley Water issued a warning to its customers on social media, directing customers to its website for more information about whether their suburb was affected.

Both providers' websites crashed, amid widespread complaints from customers they weren't told about the issue until after they'd drunk potentially contaminated water.

But Melbourne Water on Tuesday moved to assure customers that even untreated water from Silvan Reservoir is among the cleanest in the world.

Yarra Valley Water and South East Water buy bulk water from wholesaler Melbourne Water, which gets water from a range of water catchments.

The water released into parts of Melbourne's water system on Thursday night came from Silvan Reservoir, where it is naturally filtered from forested catchments that are off limits to the public.

Melbourne Water says this water usually requires minimal chlorination treatment because of its high quality, and that untreated water is of low risk to the public.

"The generator kicked in and, after successfully running for a number of hours, failed. This is a rare event.

"In the last 20 years this is only the second time in which the two main power feeders and the generator have failed at the same time at Silvan water treatment plant."

Melbourne Water is still investigating the incident and said that it was working to lessen the impacts from future outages where possible.

Melbourne Water brought in backup generators on Friday, and restored one mains power feeder on Friday night. The second feeder was brought back online by Saturday morning, and water was again being treated later that day.

All of the Melbourne suburbs cautioned to boil their water due to a contamination scare were given the all-clear on Sunday.