Presumed extinct for almost 100 years, a small, lemon-scented orchid has been hiding in plain sight and has been rediscovered by scientific sleuths at Royal Botanic Gardens Victoria.

The mignonette leek orchid, or Prasophyllum morganii, was first collected from a single population in the sub-alpine region of Victoria in 1929 but has not been found since 1933. Despite extensive surveys by orchid enthusiasts, it was considered extinct. 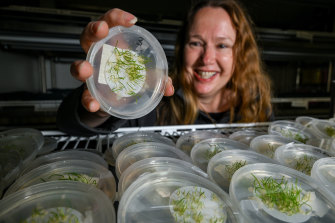 Described in the 1930s as a small terrestrial herb with a single flowering stem “densely crowded with flowers”, its only recorded population was found on private land near Cobungra, Victoria, and consisted of fewer than 15 plants.

After the black summer bushfires in the summer of 2019-20, the federal government funded a $500,000 bushfire recovery project to survey key wilderness areas in East Gippsland, the alpine areas of NSW and Kangaroo Island in South Australia for 14 species of nationally threatened orchids affected by the fires. 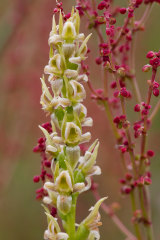 Scientists surveyed the populations, developed collections of seeds and also collected species of an orchid first found in the Kosciuszko National Park in 2000 and called the Kiandra leek orchid, or Prasophyllum retroflexum.

Through an exhaustive process of comparison between this Kiandra leek orchid, and 90-year-old specimens of the “extinct” mignonette leek orchid that had been pressed and preserved in the National Herbarium of Victoria at the Royal Botanic Gardens, scientists established the two species were actually one and the same.

“We compared the floral characters – how wide they were, whether they had little bumps on them – it was weeks and weeks of measurements,” said senior research scientist Noushka Reiter, from the Royal Botanic Gardens.

Essentially, it meant the Kiandra leek orchid doesn’t exist. The person who found those specimens and named them didn’t realise they were actually the mignonette leek orchid which, though not extinct, is still critically endangered.

A group of four scientists, including Dr Reiter, have published a paper in the scientific journal, Phytotaxa, that outlines how they measured 51 morphological traits on collected species, compared them with the herbarium specimens and concluded that the two “are conspecific [the same species]”.

“It just shows it’s really important to do that comparison work and to have that bank of specimens to compare with,” said Dr Reiter. “It’s not the kind of thing that happens often.” 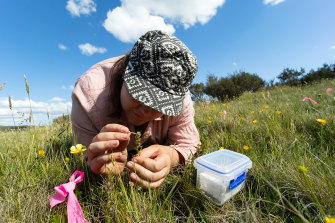 Co-author Bronwyn Ayre said the discovery would not have been possible without specimens stored in the National Herbarium.

“It was amazing to be able to compare flowers collected over 90 years ago, to ones we just collected ourselves,” Dr Ayre said.

With a small living population of mignonette leek orchids now identified in Victoria and NSW, but fewer than 500 plants existing, the scientists have collected seeds and are growing baby orchids at the botanical gardens in Cranbourne.

All the 14 nationally endangered orchid specimens surveyed by the bushfire recovery program are now being propagated at the botanic gardens.

Jacqueline Maley cuts through the noise of the federal election campaign with news, views and expert analysis. Sign up to our Australia Votes 2022 newsletter here.