For many visitors to New York City, a trip isn't complete without a visit to one of the Big Apple's quintessential destinations: the top of the Empire State Building.

But the iconic skyscraper's observatory, which has been featured in movies like "Sleepless in Seattle," is not the only sky-high observation point that offers panoramic views of the city.

There's the Top of the Rock at 30 Rockefeller Plaza, from which you can get a stunning view of the skyline that includes the Empire State Building itself. At One World Trade Center, the observatory is the highest in the city at 1,268 feet. And in March, the Western Hemisphere's highest open-air observation deck opened in Hudson Yards and then temporarily closed just two days later due to coronavirus concerns.

The city's other observatories also underwent temporary closures in March, but they've all since reopened with updated safety precautions such as limited capacity, temperature scans, and required face coverings.

Here's a breakdown and comparison of four of New York City's highest and most popular observation decks by location, height, price, and their COVID-19 guidelines.

Manhattan's observatories range in height from 800 feet to 1,268 feet — but the highest are enclosed rather than open-air. 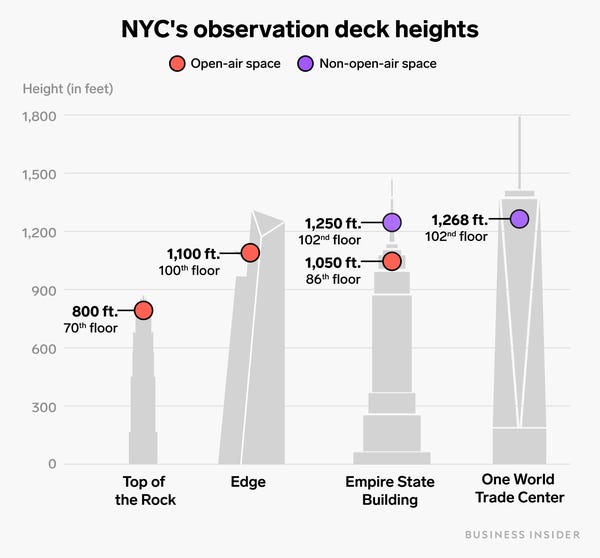 The observatory closest to street level is the Top of the Rock at 30 Rockefeller Plaza at 800 feet, while the highest is 1,268 feet at One World Trade Center in Lower Manhattan.

The cheapest observatory for adults is One World Observatory, and the priciest is the Empire State Building's 102nd-floor top deck. 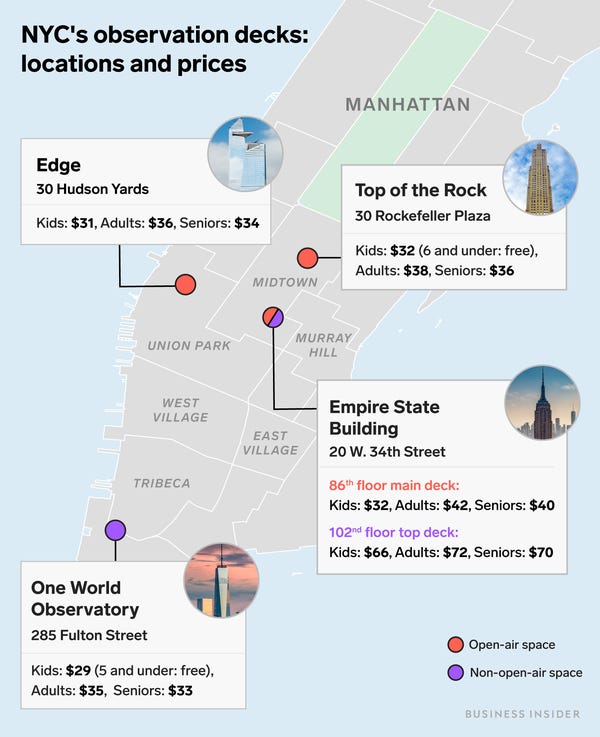 The $72 ticket for the Empire State Building includes access to the 86th floor observatory and the museum on the second floor.

If you're a New York City resident, however, the cheapest observatory to visit is Edge, which offers a discount for locals, making it $34 for adults — just under the price to get into One World Observatory.

These prices don't include taxes and fees, which can tack on almost $9 to the ticket cost in some cases.

The city's observatories all closed temporarily in March due to the coronavirus, but they've since reopened with updated safety guidelines that are summarized below. 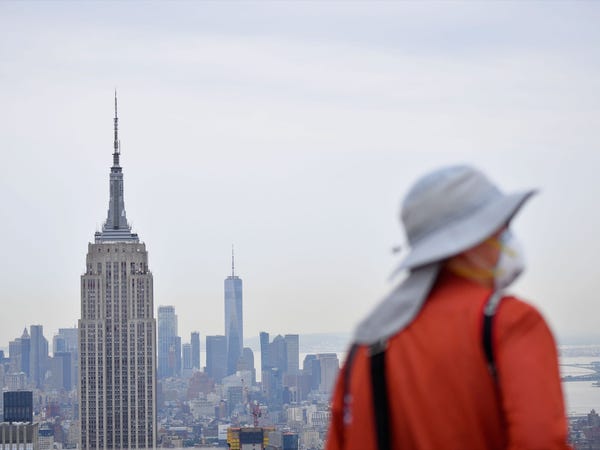 Top of the Rock: The Top of the Rock reopened on August 6 with new hours of operation from 1 p.m. to 9 p.m. Its updated COVID-19 guidelines require guests to pass a temperature screening upon entry, and each elevator cab has been limited to no more than four people or a single party. Employees are required to wear face coverings and gloves. Tickets can be bought online or at the box office.

Edge: The Hudson Yards observatory reopened on September 2 with operating hours of 12 p.m. to 8 p.m. and its capacity reduced by 75%. Visitors over the age of 2 are required to wear face coverings — which Edge will provide for those who need them — and pass a temperature check upon entry. The observatory has also implemented a one-way movement system and reduced capacity in its elevators. Tickets must be bought online in advance.

Empire State Building: The Empire State Building reopened its observatories on July 20 with capacity reduced by more than 80%. Its updated hours of operation are 11 a.m. to 11 p.m in September. Online reservations are required. At the entrance,visitors must be wearing a face covering and undergo a temperature screening.

One World Observatory: One World Trade Center's observation deck has reopened with limited capacity, contactless payments, and enforced social distancing in queues. Guests are required to wear masks and pass a temperature check. Through September 7, the observatory's operating hours are 8 a.m. to 10 p.m. From September 8 to December 17, the deck is open from 9 a.m. to 9 p.m. The observatory is encouraging visitors to buy tickets online.