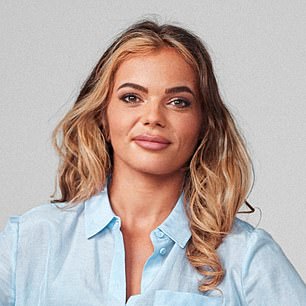 Sarah, 29, (pictured) has been single for six months and has no children

I was with my last partner for six months, but I still don’t feel as if I’ve had a proper girlfriend. I ended my previous two relationships because I wanted to play the field. I’m not sure I’m ready to meet The One yet, but I do want a serious romance now.

I’m not a person who gets nervous. I decided what to wear on the day — although I made sure I looked my best.

Single for six months, no children.

Someone outgoing, smart and funny, who isn’t lazy. Looks come second for me.

REGRETS? I missed my train.

While I said looks don’t matter, I immediately realised they do. Sami (and I hate myself for saying this) reminded me of my mum. She had on a woolly jumper and black leather trousers. Sami has that sort of school Spanish teacher vibe.

EASY TO TALK TO?

Sami made it clear she was attracted to me. She kept comparing me to the Kardashians. People tend to come on to me because of how I look rather than what I’ve got to say, and I felt that during this date.

I decided to get stuck into the wine. As the date went on, we did have a giggle. Sami is experienced and well-travelled.

Sami invited me back to her place to stay [before Tier 2 and the new lockdown started]. On dates I find it hard to say no to someone if they ask for my number, but I was booked on a specific train (which I still missed!) and had work the next day, so I was able to turn her down without feeling guilty.

It was clear Sami thought she’d hit the jackpot with me, but I’m not sure she thought of me as girlfriend material. For me, there wasn’t a connection.

Has my view of what women should look like been influenced by social media? Absolutely. Sami clearly prefers to be her authentic self, while I prefer to look good on social media.

WHAT DO YOU THINK SHE THOUGHT OF YOU?

I’m not sure if she felt a genuine connection, but as the date went on we bonded more intellectually.

If Sami came out with us, my friends would wonder why I’d brought my mum out with me.

I don’t mean to sound harsh, but maybe she should let me style her. We didn’t exchange numbers, but Sami gave me her social media details.

Single for three years, no children.

I’m looking for an attractive, girly woman. I’m extremely passionate as I was born in Mexico.

I was with my last girlfriend for six years and we broke up at the start of 2017. Things fizzled out. I maintain a platonic friendship with all my exes. Before that I had my heart broken by someone who found somebody else while working abroad.

I was nervous for a few days beforehand. On the day I got stressed out as my taxi was running late, so I ended up getting the train.

Luckily, I arrived earlier than I thought I would. But when I got there, I started worrying about what I was wearing — I noticed I looked like one of the waitresses, in black trousers and a white shirt. So I popped out and bought a cream jumper to wear over the top.

Sarah was ten minutes late, but all was forgiven when I saw her long blonde hair and big eyes.

I suspect she isn’t a stranger to filler or Botox. She definitely has those ‘Love Island lips’, but even so I was wowed by the way she looked.

Easy To Talk To?

I’m usually someone who dominates the conversation, but we both had a lot to say. We ordered three starters each, and shared the six plates with a bottle of red.

I explained that I’ve lived all over Europe, including in Amsterdam, Milan, Madrid and Barcelona, which I think impressed her. We also talked about how Sarah recently lost 3st in seven months. It’s an impressive feat. After dinner, we went for cocktails.

none, apart from the fact I almost looked like one of the restaurant staff. Sarah was a bit stressed at the end as she had to catch a train home. I asked if she wanted to stay over, but she declined as she was working next day.

I was attracted to Sarah, but I don’t know if she felt the same way about me. When I suggested we meet up again, she seemed open to the idea.

What do you think she thought of you?

I couldn’t read her or tell if she was attracted to me. We got on well, but was she just being nice?

Honestly, I’m not interested in what my friends or family think of my relationship choices. It’s what I think that counts.

Would you like to be introduced to Sami? Email your details and a photo to: [email protected]