Shaver Lake, California — More than a dozen California firefighters trying to protect a fire station in rugged mountains were overrun by flames Tuesday and several were hurt. Elsewhere, military helicopters rescued more than 150 people stranded in a burning forest.

Fourteen firefighters deployed emergency shelters as flames overtook them and destroyed the Nacimiento Station in the Los Padres National Forest on the state’s central coast, the U.S. Forest Service said. They suffered burns and smoke inhalation, and three were flown to a hospital in Fresno, where one was in critical condition.

The injuries came as wind-driven flames of more than two dozen major fires chewed through bone-dry California and forced new evacuations after a scorching Labor Day weekend that saw a dramatic airlift of more than 200 people.

Pilots wearing night-vision goggles to find a place to land before dawn pulled another 164 people from the Sierra National Forest and were working to rescue 17 others Tuesday, Gov. Gavin Newsom said.

“It’s where training meets the moment, but it always takes the courage, the conviction and the grit of real people doing real work,” said Newsom, who called the fires historic. 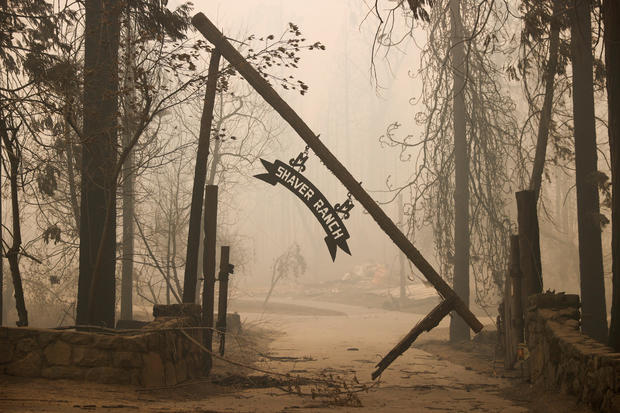 California has already set a record with nearly 2.3 million acres burned this year, and the worst part of the wildfire season is just beginning.

The previous acreage record was set just two years ago and included the deadliest wildfire in state history, the Camp Fire, which was started by power lines and swept through the community of Paradise, killing 85 people.

More than 14,000 firefighters were battling fires around the state. Two of the three largest blazes in state history are in the San Francisco Bay Area, though they’re largely contained after burning three weeks.

California wasn’t alone: Hurricane-force winds and high temperatures kicked up wildfires across parts of the Pacific Northwest over the holiday weekend, burning hundreds of thousands of acres and mostly destroying the small town of Malden in eastern Washington. 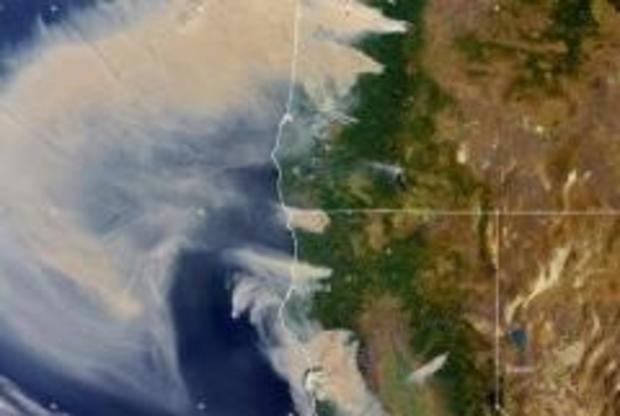 In Southern California, fires burned in Los Angeles, San Bernardino and San Diego counties, and the forecast called for the arrival of the region’s notorious Santa Ana winds. The U.S. Forest Service on Monday decided to close all eight national forests in the southern half of the state and shutter campgrounds statewide.

In the Sierra National Forest east of Fresno, dozens of campers and hikers were stranded at the Vermilion Valley Resort after the only road in – a narrow route snaking along a steep cliff – was closed Sunday because of the Creek Fire.

Well before dawn Tuesday, the sound of helicopter blades chopping through the air awoke Katelyn Mueller, bringing relief after two anxious nights camping in the smoke.

“It was probably the one time you’re excited to hear a helicopter,” Mueller said. “You could almost feel a sigh of relief seeing it come in.”

She and others had to abandon their vehicles and were flown to Fresno, where a friend picked her and three friends up for the drive back to San Diego.

The fire had roared through the forest exceptionally quickly, advancing 15 miles in a single day over the holiday weekend. It has burned almost 163,000 acres since starting Friday from an unknown origin, reports CBS Fresno affiliate KGPE-TV. About 365 buildings, including at least 45 homes, were confirmed destroyed so far, and another 5,000 structures were threatened.

KGPE says the blaze destroyed the homes of three of the dozen volunteer firefighters in the tiny town of Shaver Lake.

“One of our other guys who lost his home is on the staff that is doing damage assessment. Can you imagine that? Doing a damage assessment and going to your own home and checking gone? Yeah,” said Shaver Lake Volunteer Fire Company 60 Capt. Steve McQuillan.

Local businesses have offered their space, even hotel rooms for the firefighters who are now camping out at the Chief’s home where they just lost water.

The use of military helicopters to rescue a large number of civilians for a second day – after 214 people were lifted to safety after flames trapped them in a wooded camping area near Mammoth Pool Reservoir on Saturday – is rare, if not unprecedented.

Char Miller, a professor of environmental analysis at Pomona College who has written extensively about wildfires, said he’s only seen rescues of this size during floods, when people need to be plucked from narrow canyons.

“This is emblematic of how fast that fire was moving, plus the physical geography of that environment with one road in and one road out. It’s scary enough to drive there when nothing is burning,” Miller said. “Unless you wanted an absolute human disaster, you had to move fast.”