Bat foreplay ‘unmasked’: Wrinkle-faced bats lower a fold of skin under their chin before having sex in a rare form of courtship

A hideous and elusive species of bat has been observed mating in its natural habitat for the first time.

Researchers found the wrinkle-faced bats in the Costa Rican forest and discovered the males gather in large groups to battle it out among themselves for a mate.

To go with this form of lek courtship, known to be used by only 12 species, the bats also have a truly unique facet of their sexual escapades.

The males of the species have a fold of skin under the chin that covers the lower part of the face like a mask. Only just before copulation is the mask dropped. 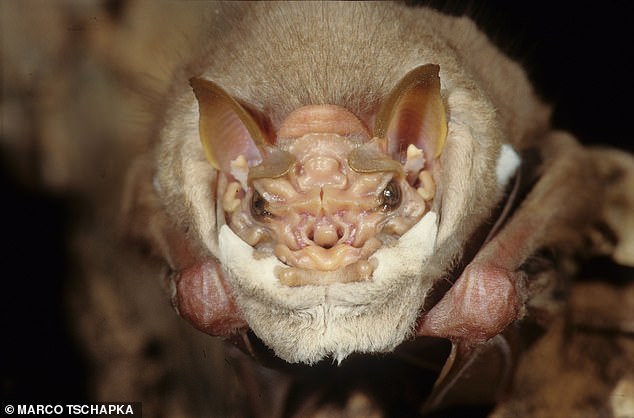 Males of the Wrinkle-faced bat Centurio senex show a furry skin fold that can be pulled up to cover the lower half of the face like a mask. It is lowered immediately before sex and goes back up straight afterwards

Centurio senex is a wrinkle-faced bat found only in Mexico, Central America, and northern South America.

But, until now, the species has rarely been studied, so little was known about its behaviour and natural history.

In the new study, published in the journal PLOS One, researchers were able to report the first observations of echolocation and mating behaviour of C. senex.

They analysed synchronised audio and video recordings from a colony of males located on 53 perches in Costa Rica over a period of six weeks.

The coronavirus causing the current pandemic which has killed more than 650,000 people around the world may have first evolved in bats in 1948, a study claims.

Academics made the discovery as part of a research project investigating the ancestral origins of the SARS-CoV-2 virus, which causes Covid-19.

Scientists led by the Pennsylvania State University compared the Covid-causing pathogen to its closest relatives found in bats.

Previous research has identified horseshoe bats as a reservoir of coronaviruses and the likely original source of SARS-CoV-2.

In October 2018 researchers happened across the bats in the forest and anxiously recorded the little-known creatures.

They found the masked males perched close together in a relatively small area, hanging from trees and shrubs about 8 feet (2.35 meters) off the ground.

Every evening, the bats started to occupy their perches at about 6 p.m. By midnight, they had disappeared again.

On October 10, the team recorded two wrinkle-faced bats mating for the first time.

‘A female obviously could not resist the seductive calls of one of the masked singers any longer,’ said Marco Tschapka, a research associate at the Smithsonian Tropical Research Institute from the University of Ulm.

‘She joined the perching male and quickly they dedicated themselves to their private business, thus confirming our idea that the males were there to attract females.’

During a six-week period, the team observed a total of 53 perches.

The greatest number of bats present at any one time was 30 in early October, and then their numbers dwindled. By October 31, there were no bats left at the site.

The nomadic bats did not return to the area in the subsequent years, depriving researchers of more opportunities to study the species.