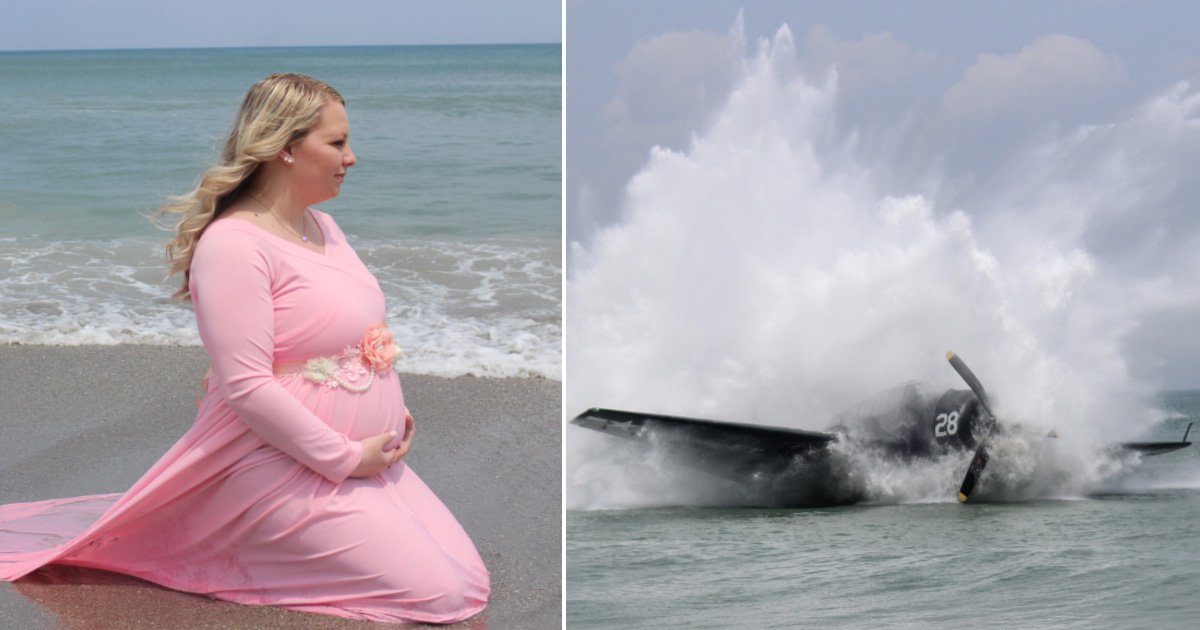 It was meant to be a beautiful moment for a mum-to-be to capture her pregnancy – but Kristan Othersen’s maternity photo shoot very nearly ended in disaster.

Incredible photos captured the terrifying moment a WWII plane crashed into the sea just yards away from heavily pregnant Kristan as she was posing for her shoot in Florida.

Kristan Othersen, who was 30-weeks pregnant at the time, was on the beach with her boyfriend, Kyle Johnson, 23, just south of Cape Canaveral, on April 17th.

The plane – a TBM Avenger – was taking part in a nearby airshow, so many beach-goers didn’t react as it flew low across the water while people swam underneath.

But nobody had realised that the plane’s engines had actually failed, and were stunned as the pilot splashed down into the waves.

Kristan’s mother Amber, who was taking the maternity photos, quickly turned her camera on the plane as it crashed into the sea.

Fortunately neither the pilot nor any people on the beach were injured.

‘My daughter Kristan wanted to take maternity photos at the beach,’ says Amber. ‘We were there for 10 minutes and my 14 year old Miya was in the water and pointed at a plane coming in really low.

‘I started taking photos as the plane kept getting lower and lower. There were people everywhere.

‘I just assumed there was going to be a trick and nobody moved. Next thing you know, he’s going in the water, and thankfully he did not hit anyone.

‘He managed to get around everyone, as the beachgoers were not moving.’

Amber managed to capture the entire drama as it unfolded – including the look of shock on her pregnant daughter’s face.

There was initial panic as the pilot failed to emerge from the plane immediately, and member of the public swam out to help.

‘It took a few minutes before he actually appeared,’ says Amber. ‘He had to keep his headset dry. Bystanders swam out to him and helped him out and then rescue units arrived.

‘It was traumatising because I thought there would be someone under the plane. You can see the look of disbelief on my daughter’s face in one of the pictures.

‘The pilot was okay but the plane stayed in the water until it was pulled out with a crane a few days later.’

In a statement after the accident, Cocoa Beach Air Show said: ‘The TBM Avenger performing in the warbird parade had a mechanical issue and the pilot was able to bring the plane down close to the shore. Rescue Personnel were immediately on scene and the pilot is okay.’

Do you have a story to share? We want to hear from you.

Get in touch: [email protected]