A Place in the Sun: Ben quizzes guests on Lanzarote property

On Sunday (June 27), Channel 4 viewers got another chance to see if Ben Hillman could find buyers Ray and Sue their dream holiday home on A Place In The Sun. In the rerun, Ben was exploring Lanzarote with the couple from Derbyshire, as they searched for a property that would work for them and their £130,000 budget. But, the presenter had to give Ray and Sue a warning after viewing one particular property.

Ray and Sue were looking for their dream holiday home in Lanzarote on A Place In The Sun.

The couple told Ben they ideally wanted to find somewhere with two bedrooms.

They made it clear they wanted to bring their children and grandchildren out to the island as often as possible.

Ray and Sue also explained that they hoped to find a property with some outdoor space and a nice view. 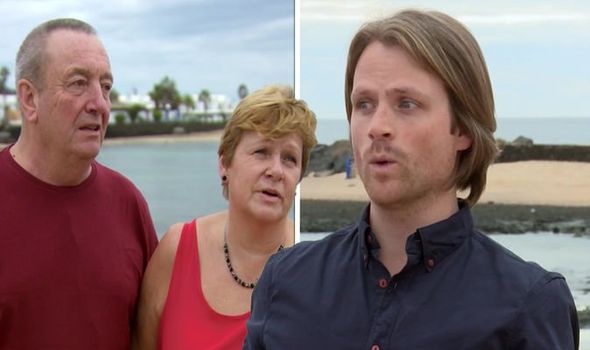 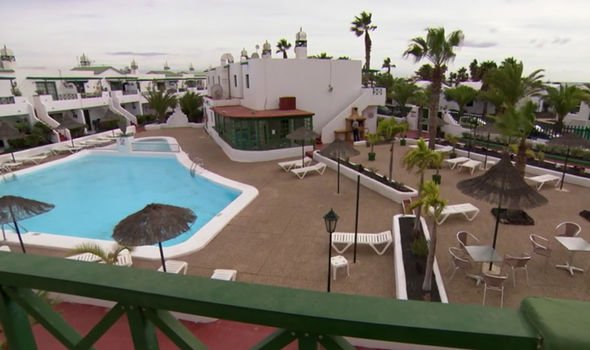 Property number one was a one-bedroom first-floor apartment that boasted a communal pool.

The building also had a small terrace that featured a sea view, however, Ray wasn’t keen on the size.

Upon viewing the terrace he commented: “It’s a little bit on the small side.”

Space was also an issue for the pair inside the building as they weren’t keen on the layout of the property. 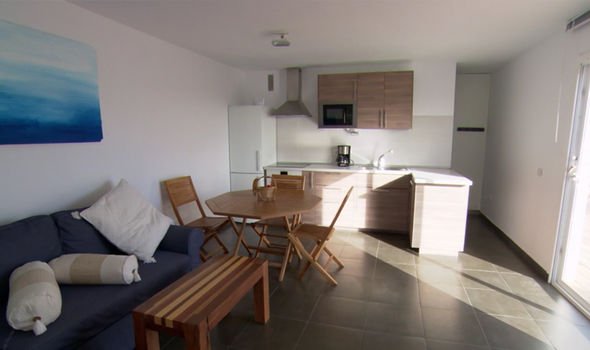 Having not impressed Ray and Sue with the first apartment, Ben swiftly took them on to view a second property.

This was a one-bedroom property with an open plan living room and kitchen.

The terrace at property number two was a vast improvement for Sue as she exclaimed: “Yes it’s lovely, really nice.”

“You could put some hanging baskets on the wall,” green-fingered Sue remarked.

The holiday home was on the market for just under £122,000, however, it didn’t tick all the boxes for Sue and Ray as they suggested it needed “modernising”.

Next up was property number three which Ben was confident would make a better impression on the couple.

This property was a second-floor apartment with a large terrace and sea view, an open plan living room and kitchen, a main bedroom and a recently converted small guest bedroom.

It also featured a communal pool and was located on a development with 150 properties.

On the market for just under £118,500, property number three seemed to be a hit with Ray and Sue.

“I loved it,” Sue confessed after viewing the property, adding: “I thought the decor and everything inside was really good.”

Ray agreed there were a lot of positives as he commented: “Great sized bathroom.”

“Any negatives with this one? Or is it all positive stuff?” Ben asked hopefully.

“For me a little bit the stairs. We’re not getting any younger,” Sue explained, pointing out that they had to go up two flights of stairs to reach the property.

Ben asked if the stairs were a deal breaker, but Ray replied: “No, like we talked about, this space you just can’t beat this.”

However, he then gave the couple a warning saying: “I’m going to be honest with you, this is as good as it gets.”

He highlighted that the couple would find it tricky to find a property as good in the area they were searching.

“We might have to throw the search a little bit further afield,” Ben explained.

Ray confirmed he’d be happy to do that, saying: “We’ve got to look at everything. That’s what we’re here for.”

Ben went on to show Ray and Sue another two properties, but it was property number three that remained their favourite.

After viewing all five options the couple revealed they still weren’t 100 per cent certain, but were keen to take another look at the third property.

Ben warned the pair not to wait too long before making an offer, saying: “The longer you leave things the more the property prices go up.”

He wished Ray and Sue all the best in their continued journey to find their dream holiday home.

A Place in the Sun continues weekdays at 3pm on Channel 4.