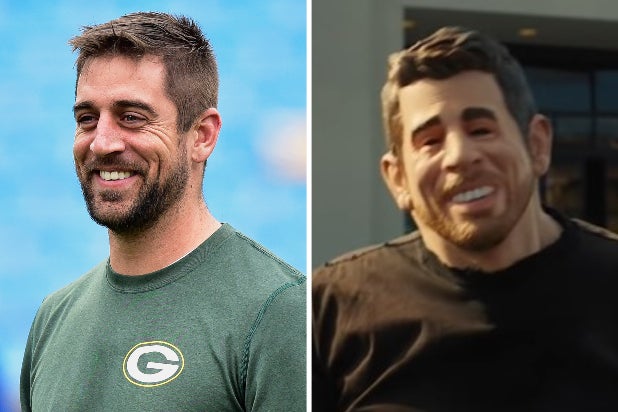 There have been many infamous masked murderers in horror cinema: Jason, Michael Meyers, Leatherface and now … Aaron Rodgers?

The Green Bay Packers quarterback makes an appearance in the new Blumhouse film, but not in a traditional cameo.

In the film, teenager Millie (Kathryn Newton) swaps bodies with a mass murderer known as the Blissfield Butcher (Vince Vaughn). Since everyone knows what the Butcher looks like, Millie — who now has the killer’s face — must find a disguise. She and her friends go to a costume store and purchase an Aaron Rodgers mask, which she must wear in public.

Director Christopher Landon shared the hilarious story behind the mask exclusively with TheWrap. Landon originally had another famous celebrity in mind, but was turned down.

“We actually approached John Goodman first for his permission. I actually tried to do through my friend Sarah [Gilbert], who is on ‘The Conners’ with him and I’ve known my whole life,” Landon explained. “And poor John Goodman was like, ‘What the f— are they asking me for? What do they want to do with my face?’ So, he passed.”

“We were faced with the abyss with who [to use]. There’s so many weird ways you can go. And then I realized a sports figure would be beneficial to the story,” Landon continued. “I don’t want to spoil anything but there’s a moment at the end of the movie where there’s a payoff with the mask. So it made sense that we find someone who was a really well-known sports figure — and Aaron Rodgers was the guy. He’s famous enough, well-known enough and liked enough … and I heard that he has a sense of humor. So we were able to reach him through my agency and he said yes.” 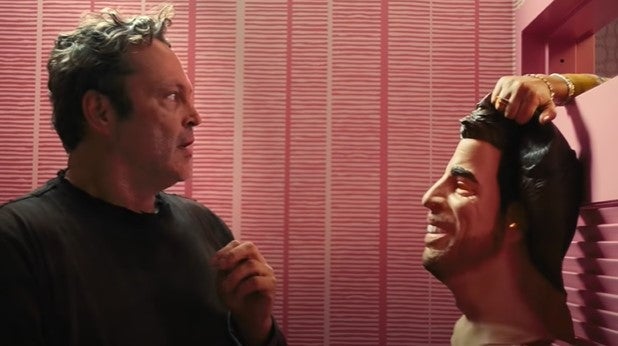 Interestingly, the Super Bowl MVP didn’t have to go and have his face molded for the mask.

“The beauty of it is that it needed to be a close likeness of his face but we actually didn’t want it to be perfect,” Landon explained. “Part of the fun of these masks is they’re always a little f—ed up. It’s kind of like going to Madame Tussaud’s … it kind of looks like them but there’s something off.’”

“I’m not a sports person admittedly, so I’ve gotten a real kick out of hearing people’s reactions to seeing that mask. It really does throw people off in a really good way,” he added. “I’m actually dying for Aaron to see the movie and hear what he has to say.”

Using a celebrity’s face as inspiration for a killer’s mask is not unprecedented. Horror aficionados know that the mask Mike Myers wears in the “Halloween” movies was based on William Shatner’s face.

“That was sort of what we going for when first went with John Goodman,” Landon added. “We thought, ‘This will be such a bad version of John Goodman it will be terrifying.’ And I think there’s a little bit of that with Aaron Rodgers as well.”

And while it’s not the real Aaron Rodgers appearing in “Freaky,” the NFL player did have a fiery on-screen performance in “Game of Thrones.”

You can see a bit of the Aaron Rodgers mask in the “Freaky” trailer below and also in the film, which opens today.