Adam Frost was on hand in an old episode of Gardeners’ World to show new and returning viewers the ingenious ways they can grow vegetables no matter how small their outside space is. During the clip, he was interrupted by a furry friend and told those watching at home how his pet cat would become the focal point of the segment.

“I know I had mates who had no interest in gardening whatsoever that are out in their gardens now and having a go, because I’m getting lots of texts asking ‘Frosty how do I grow this? How do I grow that?’” He began.

“So, I just thought it would be an idea to go back to basics and look at veg growing.

“What I’ve done is I’ve looked for a few containers we had kicking around.

“I’m going to start of sowing a few bits and pieces which are quite quick, results-wise and you could start off on a windowsill and then you could move out to the patio. 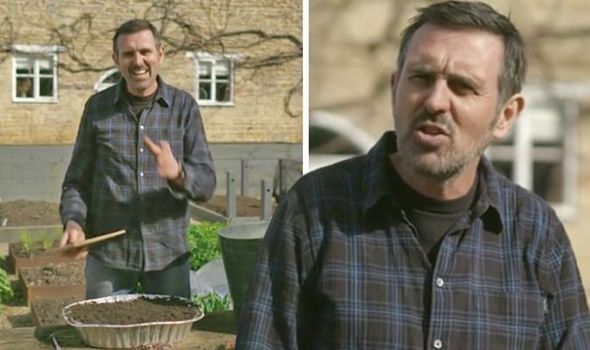 “I found this old aluminium container which was leftover from Christmas,” Adam continued. “I’m just making a few holes in the bottom of this so any water can drain though.

“Now what I’m going to do is fill with compost, what I’ve done is a soil and compost mix but that said if you can’t get out and get your hands on any compost, just some soil from the garden.”

A fluffy black cat then appeared into view and Adam said: “Hello mate, did you think that was dinner or something? It’s not mate, it’s compost.”

“If you are going to get soil out of the garden, make sure there’s no lumps or stone in it. So we fill that up, what we do is just roughly level across the top. 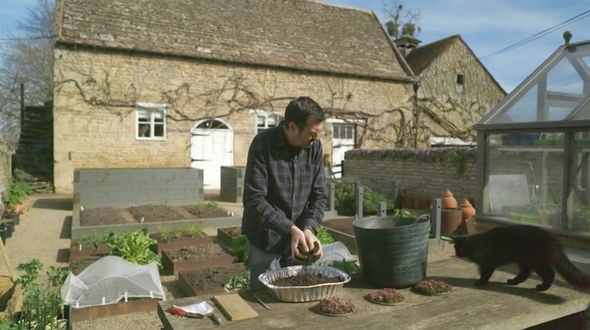 The cat then moved across the table and jumped down and the gardener remarked: “You’re paying no attention in any of that because of that cat!

“And then a couple of little taps doesn’t need any more than that.

“What I’m going to do now is just water that. If I do it now, I don’t have to water it at the end, that means the seeds are not going to be washed everywhere.

“What I’m going to sow is wild rocket – wild rocket is great because it comes again, and what I mean by that, you sow it, it comes up, you can cut it and it will keep growing. 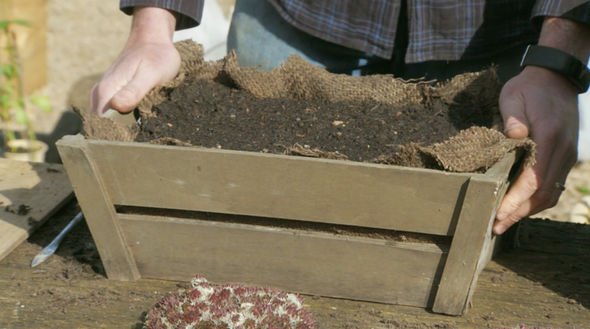 “Any of your quick crops like salads will work well in a shallow tray,” he explained. “And I’m just going to gently sprinkle them [with soil].

“If you use garden soil, it is very likely weed seedlings will emerge, so it’s worth then sowing in rows so it’s easy to tell the difference between the weeds and the seedlings.

“The next thing to do is to take some of your soil or compost and what I do is cover it with about a centimetre of compost, but i’m rubbing it between my hands so I make sure it’s quite fine.

“One thing to remember if you do do rocket instead of a salad, is rocket does have a tendency to go to seed very quickly,” Adam revealed. “Once it’s germinated I will keep it in a shady space. I reckon that will keep our family going for the rest of the summer.”

Once the rocket was sown, Adam moved on: “And then I found another old container. I’ve put some hessian in to hold the compost and I’ve wetted that compost.

“An empty compost bag or even a bin bag would work well. Just make sure you punch a few drainage holes in the lining before you fill it with soil.

“What I’m going to do in this one is sow some carrots,” he told viewers. “That’s why I’ve used a deeper container.

“If you’re going to grow something, you’ve got to have a deep enough container to deal with the depth of that plant. Beetroot would work in here just as well.”