“The person who needs to retire at the end of this match is Chris Evert,” one Twitter user wrote of ESPN commentator 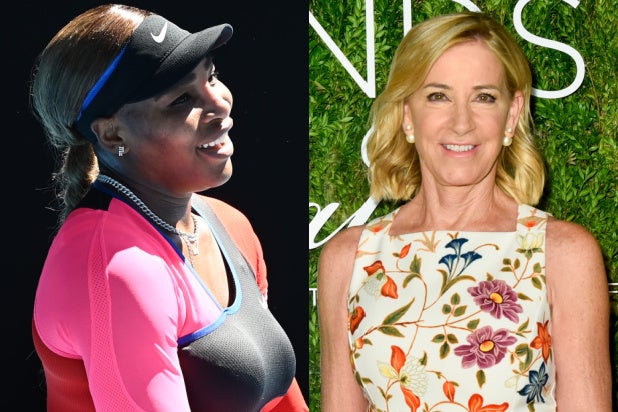 Some Australian Open viewers would like to go a few sets with tennis legend Chris Evert over her commentary during Serena Williams’ match vs. Naomi Osaka.

Osaka defeated Serena, who is of course front and center in the G.O.A.T. (Greatest of All Time) conversation in her own right, on Wednesday night. Evert, who was calling the match for ESPN, rubbed some fans the wrong way with her words and perceived tone during the quarter-final.

“The person who needs to retire at the end of this match is Chris Evert,” one Twitter user wrote.

There is speculation that Williams is soon to announce her retirement from the sport. When asked after her match about walking away from tennis, Williams broke down in tears.

“Chris Evert is the face of misogynoir. Unapologetic and repetitive AF,” said another.

“Misogynoir” is a phrase coined by Moya Bailey to describe “the specific hatred, dislike, distrust, and prejudice directed toward Black women.”

“When I see women doing great things, like Serena Williams, I feel proud as a woman because she is pulling all women up with her greatness,” a third posed. “Chris Evert is the opposite of Serena, she tears all women down because of her own jealousy and insecurities. Get better Chris.”

The common criticism of Evert’s Wednesday commentary seems to be an assumption that Williams making her 54th quarter-finals in a major, tying Evert, was not an easy pill for the 1970s and 1980s tennis star to swallow. Serena has steadily surpassed several Evert accomplishments in recent years.

Evert has previously been called out for focusing on the “drama” Serena Williams brings to her tennis matches and not the skill. Some viewers believe Evert’s criticism is race-based.

Evert seems to have responded to one person on Twitter, her colleague, ESPN Radio host Josh Cohen.

“Because you’re my friend @ChrissieEvert I’m going to give you a quick read on Serena’s non-verbals leaving the court,” Cohen tweeted at Evert. “She did not indicate tells consistent with knowing she won’t be back. She did however indicate humility and appreciation. #bodylanguage #SerenaWilliams”

“Because you’re my friend my response was, she was either showing gratitude for their support or saying goodbYe to The Australian Open,” Evert responded. “Period.”

A spokesperson for ESPN did not immediately respond to TheWrap’s request for comment on the commentary and its reception on social media.

See a sample of that backlash below.

There are plenty more where those came from.