A 1980s film censor loses her grip on reality in this VHS-inspired horror movie. 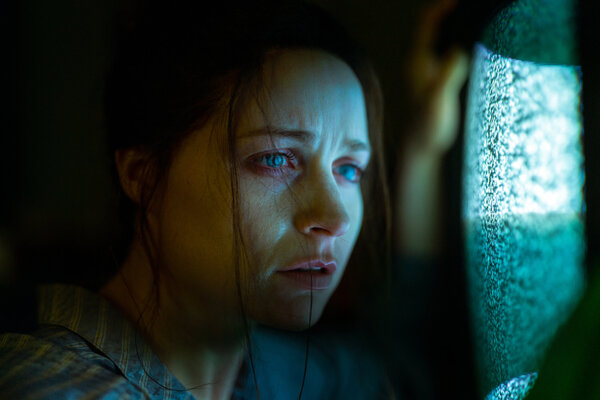 Gloomy in tone and gray in palette, “Censor” returns often to a drab screening room where Enid (Niamh Algar), a conscientious British film censor, scrutinizes a stream of gory exploitation movies. It’s the 1980s, and the violence driving the unregulated home-video market has incited a moral panic that’s filling the tabloids and politicians’ outraged speeches.

“Eye gouging must go!” Enid scribbles in her notebook as the latest horror movie unspools. Yet beneath her hot-librarian styling and prim manner, Enid seems fragile and too-tightly wound. Then two things happen that further undermine her equilibrium: One of the films she rated has inspired a freakish copycat murder, and the public has decided she’s to blame; and, more disturbing, a scene in another movie eerily echoes her hazy memories of her sister’s disappearance many years earlier.

A homage of sorts to the low-budget trash of the period — and a mordantly humorous jab at its excesses — “Censor” gazes on movie history with style and commitment, but little apparent purpose beyond simulation. Annika Summerson’s cinematography elegantly mimics the era’s grainy VHS aesthetics; but the director, Prano Bailey-Bond (who wrote the script with Anthony Fletcher), barely gestures toward the delicious irony of authorities railing against fictional brutality while the streets are erupting in real-life protests against Margaret Thatcher’s oppressive policies.

Plagued by dreary pacing and weak plotting, “Censor” is less a mystery than a portrait of lingering trauma and flaring delusion. The so-called “video nasties” furor of the time claimed that repeat viewing of unexpurgated horrors encouraged a craving for more; Enid seems on track to prove that thesis right.