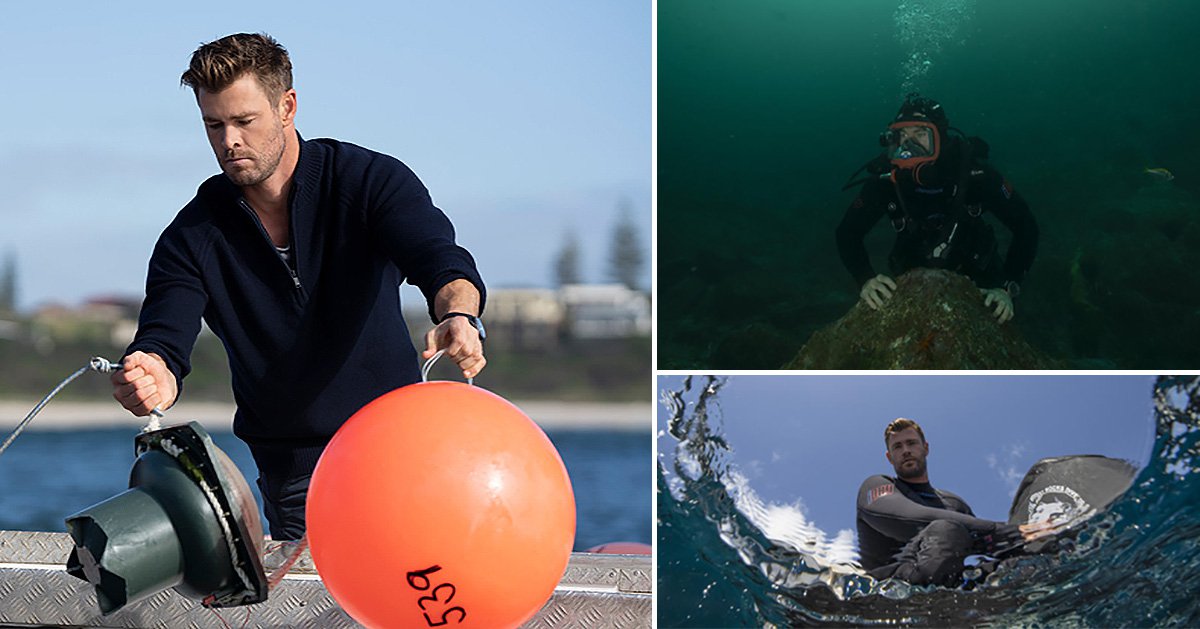 The Thor star got stuck in with a team of shark experts for part of his show, Shark Beach, as researchers sought to learn more about the species, and keep swimmers safe, through carefully capturing sharks for sampling and tracking purposes.

The programme is part of National Geographic’s Sharkfest, and the Marvel actor was there to learn from the specialists while onboard a research vessel.

Growing up in Australia as a fan of the outdoors and surfing, Chris admits at the top of the show that he’s never yet encountered a shark in real life but admires the animal as ‘elegant’.

The country has recently recorded its highest death toll from shark attacks in a century, so the actor is keen to learn more about how humans can co-exist peacefully in the ocean with sharks when there are more of us than ever taking to the waves.

As the team carefully captured a male great white shark measuring almost three metres in length, the Aussie star was brought in to perform his, um, special duty, and Chris seemed to understand the importance of performing his task with the utmost care.

Brandishing his equipment, he continued: ‘All for science. So let’s dig in, shall we?’

Once his mission was complete, Chris, ever the gentleman, apologised for the intrusion with a quick ‘sorry about that, mate’.

He then held on to his dorsal fin until it was safe for the shark to be released, joining a community of more than 400 great white sharks currently being monitored by the Department of Primary Industries’ (DPI) shark scientists.

The charming star was recognised for his services to the arts and commitment to charitable organisations in the Queen’s Birthday Honours list in June, making him one of 1,190 Australians who have been honoured by the Queen this year.

Chris has been a patron of Australian Childhood Foundation since 2009, and at the beginning of 2020 donated AUS $1million (£546,000) to Australia’s bushfire appeal, which he has continued to provide financial backing for via groups leading the recovery process from the natural disaster.

He also wrapped filming on Thor: Love and Thunder in Australia in June, with director Taika Waititi joking he was honoured to ‘bust my a** and have a nervous breakdown’ so audiences can watch the Marvel superhero’s next outing in May 2022.