Ratings: ABC Sinks to the Bottom of the Big 4 Nets With ‘Finding Dory’

TV fans are juggling more services than ever before. New data from Hub Entertainment Research drives home how the TV landscape has evolved compared to just a few years ago.

Right now, the number of TV “sources” among Americans is up 18.75%, or about one new service, since the same time last year, according to Hub’s annual “best bundle” study. Those sources include SVOD services like Netflix and Disney+, ad-free streaming services, cable and satellite packages, live TV services from YouTube TV and Hulu, and even viewers who use an antenna to watch TV.

Even more noticeably, the number of TV sources Americans use has nearly doubled in the last three years, going from 3 services on average in early 2018 to the 5.7 sources on average now. 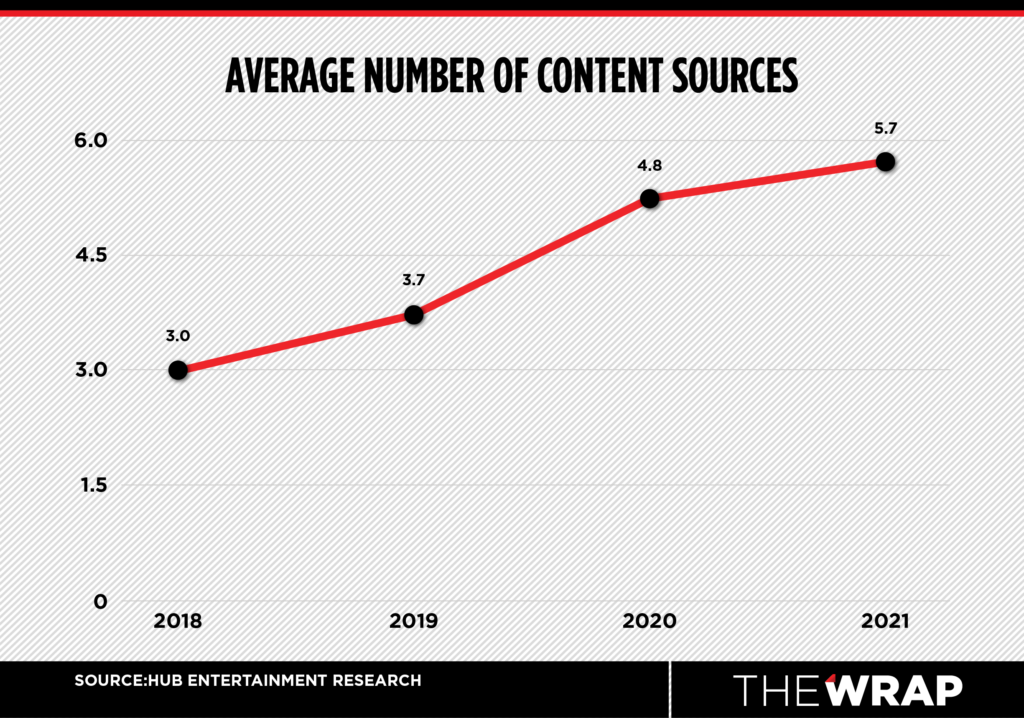 What’s behind the big jump in content sources? Jon Giegengack, Hub’s founder and principal analyst, said it’s a “perfect storm” of factors, including more streaming services hitting the market with their own originals and exclusives that give viewers a reason to at least try them out.

Another key factor, Giegengack said, was the pandemic, “which shut people in at home and created this big vacuum of free time, which increased both the opportunity — and curiosity — to see what different providers are out there and what they have to offer.”

Hub’s study found 59% of Americans subscribe to at least two of the “Big 5” streaming services — Netflix, Disney+, Amazon Prime Video, Hulu and HBO. That’s up 8% from the same time last year, but it’s also worth noting HBO Max didn’t launch until May 2020, which helped shake HBO from its streaming lull with prior services like HBO Go and HBO Now. Going a step further, 40% of respondents said they subscribe to three or more of those “Big 5” services.

From a macro standpoint, this all adds up: More services have launched in the last few years, and combined with the pandemic, that’s given viewers plenty of reason to expand their number of TV sources. But Giegengack hinted there may be a sign that, as the average number of content sources approaches six, viewers may be hitting a wall — at least when it comes to paying for content.

“I think we’re getting close to a saturation point [with TV sources], and one thing that suggests that is the number of growth in users of the ad-free services, like Tubi and PlutoTV,” Giegengack said. “One driver could be [American viewers are] at the threshold of how many services they want to pay for, and those free platforms give them a way to sort of satisfy their curiosity without having to create a new account or take their credit card out again.”

That makes sense, considering TheWrap reported earlier this year that the average American household was spending $40 per month on streaming services, up 17% in a year. Add another source that costs money on top of that, like YouTube TV for $65 a month, and suddenly you’re not saving as much money as you probably expected. At the same time, cable and satellite providers have been losing subscribers at a record rate. If the number of average TV sources continues to increase year-over-year, ad-supported services could be the driving force for cost-conscious Americans.