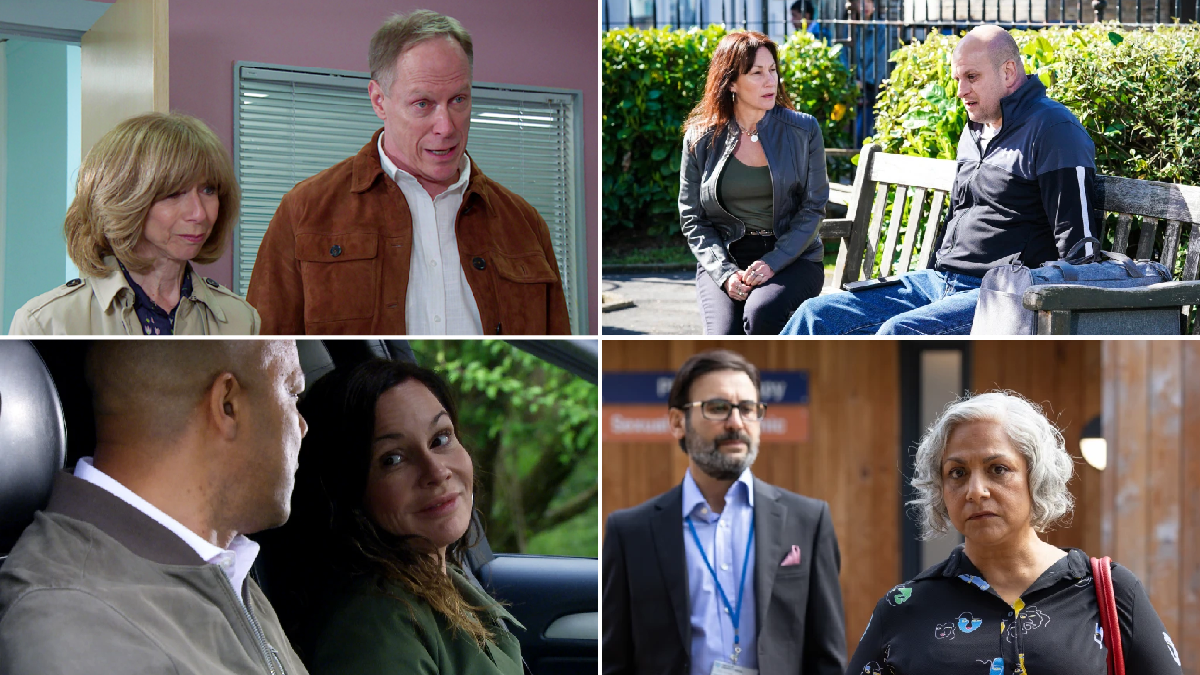 The weekend is almost upon us, and what better way prepping for it than finding out what’s on offer in the soaps next week?

EastEnders is serving up a storm of treats next week, with a siege, a kiss and a potential departure all on the cards.

We thought so too. Remember, if you’re desperate to witnesss all the Walford shenanigans as soon as possible, all of next weeks episodes will be dropping on BBC iPlayer from Monday morning.

Coronation Street, meanwhile, is home to a number of exciting developments, not to mention another superb return, and we recommend tuning into every last second of it.

Emmerdale sees Chas Dingle continue to pursue her passion with Al Chapman, while Misbah Maalik is left stunned by a shocking return in Hollyoaks.

But that’s just the beginning of what’s to come! For all this and more, look no further.

1. Toyah, determined to distract herself, mounts a protest against waste incineration. Leanne offers to help, and Mary, Brian, Nina and Asha join in. Toyah, meanwhile, leaps into the cab of the bin wagon, but she gets a huge shock when a man joins her – and it’s none other than Spider Nugent!

3. Carla warns Peter to think carefully about rejecting the life-changing sum of money on offer from Thorne. Simon also points out to his dad that a hundred grand could change their lives forever.

4. Stephen apologises for blaming Gail for Audrey’s accident and offers to broker peace between mother and daughter duo. At Audrey’s bedside, Stephen firmly warns his mum that if she doesn’t patch things up with Gail, he’ll be on the first plane home!

5. Aaron and Summer plan their holiday in Spain. Summer admits that she’d rather focus on tourist attractions as she’s not confident enough to sunbathe in a bikini.

6. When George overhears Frank threatening someone over the phone, he makes a decision and finally explains to Sean how Frank made his school days a misery by humiliating him at every turn. Despite Frank’s insistence that he’s changed, Sean finishes with him

7. Mimi, Phill’s mum, is knocked flying by Cerberus and sustains a sprained hip, much to Fiz’s dismay. Evelyn and Mimi living under the same roof is going to be a strain for everyone, that much is guaranteed!

8. The grand opening of Peggy’s ends in disaster, as two men enter the club waving a gun. Shirley takes cover in the office, while Kat, Sharon and Sam are put in huge danger. Sam defiantly refuses to back down, but the threat becomes serious, and as things spiral out of control, someone winds up shot!

9. Suki invite Eve over to lunch to thank her for all of her support. Eve, however, detects a spark between them, and thus she leans in for a kiss. How will Suki react?

10. Rainie faces a dilemma when Bernie tells her she can have Roland, but only if she leaves Stuart. Stuart, however, makes things easier, as he decides to leave his wife. Karen does her best to get through to Stuart, but Rainie resolves to leave the Square. Will Stuart be able to convince her to stay?

11. Ben and Jay return home but it doesn’t take Kathy long to realise Ben is struggling. Ben reluctantly agrees to take Lexi to a Pride fair but as they get ready, Peter drops off a box of lost property and Lexi pulls out the shirt Lewis was wearing on the night of the attack. Ben locks himself in the bathroom leaving Lexi distraught.

12. Ash is devastated to learn that her job in Canada has fallen through. Suki spies an opportunity, as she tries to bribe Ash into applying for the GP job with a car. Ash eventually agrees to apply, but she reconsiders upon realising Suki has been going through her emails.

13. Howie is grateful to Kim for saving the day at Lily’s party and one thing soon leads to another and Kim kisses Howie. Kim quickly catches herself and confides in Denise, she’s not sure she can love Howie after Vincent.

14. Kathy snaps at Peter over his nonchalant attitude regarding Ben.

15. Chas is frustrated, feeling like her life is spiralling out of control, and thus she seeks comfort in Al once more as they share a passionate kiss. Afterwards, she suggests they book a hotel, but after Faith collapses, she reconsiders, ending things with Al. That is, however, until the duo admit they’re jealous of each other’s relationships.

16. Nicola sets off to pick up the kids from school, but she’s overwhelmed with thoughts of her attack and thus slams on the accelerator, colliding with David’s van! David demands her insurance details, but Nicola bolts the door. Afterwards, she hears girls laughing outside and, thinking her attackers have returned, hits someone over the head.

17. Ethan snaps at shocked Charles, angered that Charles isn’t giving him and Marcus any time alone.

18. David feigns a neck injury to the insurance company after his crash with Nicola and deflects when Victoria brings up plans for an expensive wedding. David’s glad that Victoria buys his lie when he feigns his neck injury

19. Mary tells Rhona to get a move on with her wedding plans, insisting that she wants to be alive to see it. Rhona is fuming when she finds out Mary’s booked a date for her wedding without telling her.

20. Laurel chats with a flirty Kit as amused Marlon watches on.

21. Misbah goes out of her way to prepare for the trial, but she soon receives a setback, as Verity informs her that Ali’s lawyer is difficult. Things take yet another turn, with Verity delivering some shocking news.

22. Misbah stands her ground in court, refusing to hide, as she bravely reveals the truth. Ali, as a result, experiences first-hand how his actions have consequences.

23. Norma makes a move on hard-man Warren, much to Sienna’s joy. Things, however, take quite the turn, and the outcome isn’t exactly what Sienna had been hoping for. Warren, you see, ends up securing a job with The Undertaker!

24. A letter hidden in Leela’s bag reveals the shocking reality of Ste’s family finances as he finds out their home is at risk of being repossessed.

25. Shaq reveals to Nadira that he saw her kiss Juliet. Confronted with questions on her sexuality, Nadira makes a surprising decision to prove her feelings to him.